Daredevil season 3 episode 4 opens with Fisk staying one step ahead of the FBI. When Dex leads the agents into Fisk’s bedroom to search it first thing in the morning, Fisk is already awake and waiting for them. Fisk continues to take an interest in Dex, as he did in the previous episode.

“Screw the Sidelines, We’re Going on the Offense” 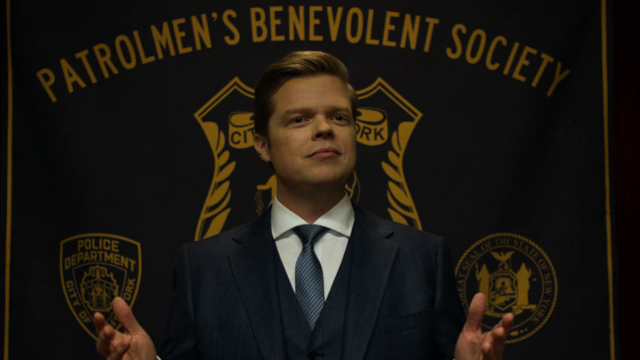 Foggy tells Marci all about his encounter with Matt. Foggy is freaking out that Fisk is coming to get him. Marci explains that if Fisk really is after him, then the safest place for Foggy to be is in the public eye, criticizing Fisk. Marci convinces Foggy to run a write-in campaign for District Attorney on the single issue platform of putting Fisk back behind bars.

Foggy launches his campaign at a police union event. The officers are initially hostile toward Foggy for defending some of the folks that they arrested in the past. However, once they hear that Foggy is on their side and wants Fisk back behind bars, they quickly sign up to endorse Foggy’s campaign.

“Part of Him Was Buried at Midland Circle” 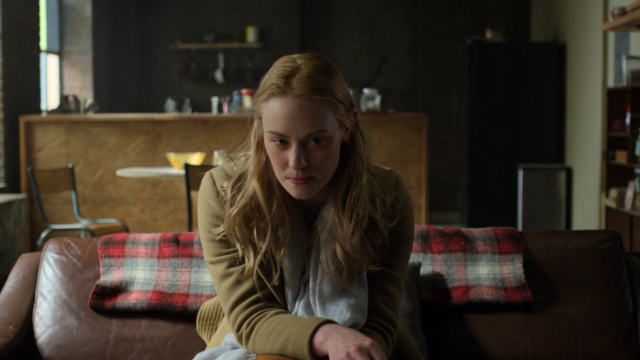 No longer keeping Matt’s secrets from Karen, Foggy tells her that Matt approached him, but that Matt has changed. Karen, resigned to the fact that Matt has made his decision to wage a war against Fisk without them, presses forward with attacking Fisk in the press. She uncovers the financial ties between Fisk and the money that bought the Presidential Hotel. Karen gets the name of someone at Red Lion National Bank to follow up on.

“The Lies That Keep Us Safe are the Ones Worth Telling” Ray’s family is not handling the attack on the FBI transport well. His wife is upset and their child is not sleeping. Ray’s boss suggests that the best thing to do for his family is for Ray to lie to them about the dangers associated with his job.

“Real Heroes Are Ridiculed and Dismissed” 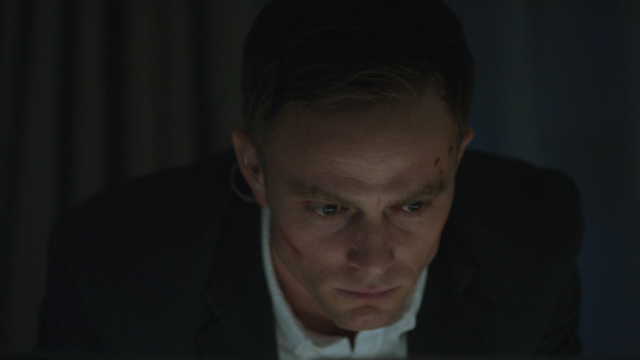 Dex continues to antagonize Fisk. During his watch, Dex is asked to leave by a sympathetic Ray who is grateful that Dex stopped the attack. However, forensic evidence from the attack scene contradicts part of Dex’s report. An OPR agent interrogates Fisk about the night of the attack. Dex replays the recording of the interview, where Fisk lies and corroborates Dex’s version of events. When Dex ask Fisk why he’d lie for him, Fisk says it’s because Dex was a hero who saved Fisk and the other agents. Fisk says Dex doesn’t deserve to be attacked by the press and the public for that. 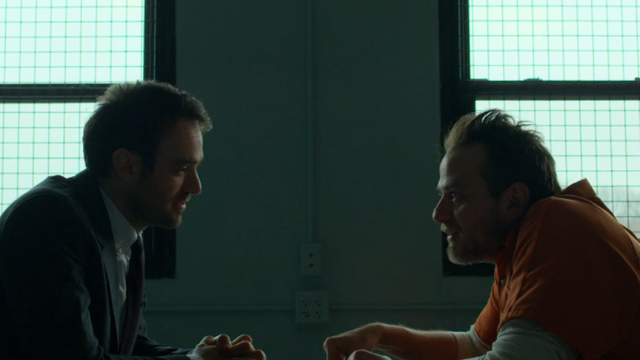 Matt enters the prison, posing as Foggy. He wants to know why Fisk gave the FBI information on the Albanians. Inside, all hell breaks loose, as Fisk is still in control of the prisoners and the guards. Matt is saved by the Albanians who explain that they didn’t attack Fisk for snitching. Fisk set that up to get the FBI to move him. Matt convinces them to help him get to Fisk and send him right back to prison, where the Albanians can do whatever they want to Fisk. Matt is given the name of the freed prisoner who attacked Fisk.

In the confusion of the prison riot, Matt makes it back out to his taxi, where he falls asleep in the back seat. Upon waking, he finds someone else driving. The driver bails out of the moving taxi right before it plunges off the end of the dock, taking Matt into the water with it.

What did you think about Daredevil season 3 episode 4? Let us know in the comments below!

Marvel Studios has released a new behind-the-scenes video taking a look at how the Black Panther: Wakanda Forever underwater sequences…
Movies 37 mins ago

Some of the bodyguards start torturing Thorfinn and Einar. Their boss arrives just in time to stop the chaos. Here…
Anime 2 days ago

Ketil puts Thorfinn and Einar in the same job. The work seems promising for Einar, but some of the people…
Anime 1 week ago