Josh Gad does his own stunts.

It’s important I state that upfront because I promised I would. And it’s mostly true. My introduction to Gad on the set of Kenneth Branagh’s Artemis Fowl was watching him get attached to a giant wire harness stretching outside the front door or the Fowl Manor which has been constructed for the film and yanked at 30mph out of the building and into a waiting crash pad.

RELATED: Fowl Manor is Real as CS Visits the Set of Artemis Fowl

CS: I’ve talked to some actors who are like, “Oh yeah, I love that kind of stunt work” And some actors are like, “Well, I feel the opposite of that.”

Josh Gad: So there’s Tom Cruise and then there’s me. That’s the high end of stuntmen. [Raises one hand high in the air]. And then I’m here. [Lowers other hand down to the ground]. And then everybody else is in between. I enjoy it. I don’t have what you might call, a stunt body. Although I have a lot of padding. I enjoy a challenge. That was much crazier than I expected it to be. Just because you literally- I don’t even know if you guys can tell from the footage, but your body leaves the ground. So you’re being shot like a bullet backwards. So it’s a thrill, but it’s also like, “Oh my God, what have I done? I never said goodbye to my kids before they woke up.” So you’re terrified, but it’s fun. It’s the beauty of what we get to do. Tomorrow or Monday, I have to hang off the chandelier. So it’s another thing off the checklist.

CS: I’ve got “Josh Gad does his own stunts” down.

Gad: That’s right. Thank you. It’s going to be a great article.

CS: We heard that you improvise a lot in this movie-

Gad: I pretty much- Every take we do, Ken encourages me, sometimes with an empty brain, to throw stuff out there. And it’s so fun because Mulch is such a… He really is- He’s a loner. But he’s also, as you see, he cares. And he has a good heart. But to see him run the gambit of one minute, being very sneaky and a bit of a kleptomaniac. And then the next minute, using his persuasive behavior to calm a giant troll down, provides ample opportunity for improv and craziness.

CS: Was the song your idea?

Gad: Well, initially they had Hush Little Baby in the script and it felt a little unspecific. And I started spitballing ideas with the writer and I said, “What if-” Because there’s this common refrain in the movie, where beings like Holly and Mulch listen to contraband human music. Which I thought is such a fun little detail, because you’re not allowed to listen to human music in the fairy world. And so, the idea that we see Mulch listening to human music in Haven City at the beginning. And then carry that into this and singing such a specific song to calm and relax a troll, just made me laugh so hard. Because it’s so absurd. That you have this giant beast and the one thing he’ll respond to, are the beautiful lyrics of this song. So yeah, it was something that just sort of… We all started spitballing and this is where we landed.

CS: Did you spitball other songs to do?

Gad: Yes, we had at one point Despacito. Which was a very different approach. Yesterday we did David Bowie’s Starman. But it felt like the troll responded best to Foreigner, so that’s what we stuck with. What a weird first scene for you guys.

CS: Kenneth Branagh told us Judi Dench was learning improvising from you. What’s that like?

So the idea that a woman, who I revere as one of the greatest actresses of all time. For her to say that about me, I have to laugh at it because, one, it’s not true. And two, it is the most incredible honor that I could ever be given. To have her spew that bullshit in front of me. Guys, not trying to win you over, but it’s… She’s amazing. I adore her. 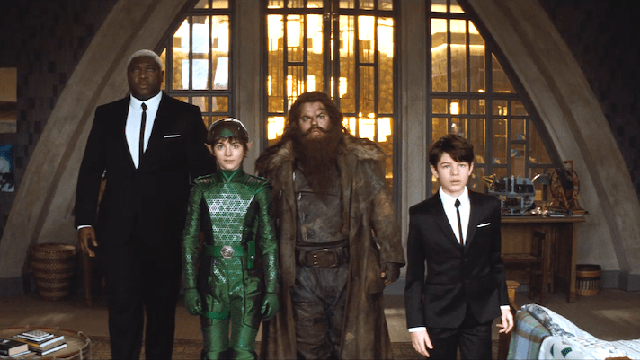 CS: Given you did study her work and Kenneth’s work, are you now amazed that you had two experiences with them.

Gad: I pinch myself every day, mainly to try to see if the beard is on. But I do, I’m so… It’s such a dream come true to work with your idols. And these two are at the very top of my Mount Rushmore of idols. When you’re in a scene with Judi Dench, you keep saying to yourself, “Don’t screw this up.” And when you’re being directed by Kenneth Branagh, you keep saying to yourself, “Just keep him happy, don’t mess this up.” You don’t want to pull the wool- You don’t want him to be like, “Oh, I made a mistake.” And so for me, every time that I’m in there, I’m always striving to do my best work. And to get compliments like that is amazing.

CS: Is that what drew you to do this film? To be with Kenneth Branagh again?

Gad: There were a number of things that drew me to the project. Frankly, I’d always wanted to play in a world like this. A high-concept fantasy world. I just think it’s such a fun environment to be free and be imaginative. I read the Eoin Colfer book and I fell in love with it. And so, for me to play a character that is so unique and so familiar to so many readers, that was such a thrill. But obviously to get together with the gang again was one of my primary motivations.

It’s such a fun playground. Very different than Orient Express. Because one, we didn’t have trolls or goblins in Orient Express. Although that’s on the director’s cut, I believe. But the idea that all of this is practical. So much of the movie has practical effects, as you saw. There’s a giant puppet created by the War Horse guys, which I think is the coolest thing ever. And so to be able to interact with something like that, it’s so fun as an actor.

CS: Did you change your mind in any way when they showed you the giant jaw that you had to wear?

Gad: Oh, that giant jaw was- It reminds me of Beetlejuice. No, it’s great. Definitely not something I’m going to show my kids for a little while because, “Daddy what’s going on?” But it’s pretty amazing. That effect is going to be incredible.

CS: How heavy is it wearing that jaw?

Gad: Not as heavy as wearing Chewbacca on my body every day. I have a lot of leather and hair on my body. There’s actually hair… You guys can see. There’s here inside of my…

CS: In your ears.

CS: What inspires your character- Because he comes in to steal stuff and then turns around and joins Artemis and everyone.

Gad: So that was very important to me. One of the things that I love so much about the book is Mulch very much is a loner. He’s like a dwarfed version of Han Solo. But what’s so wonderful about- I think where the writer’s taken the character in this version, is much like Holly and much like Artemis and much like all of our main characters. He’s an outsider, looking for a way to fit in. So our version of Mulch is, he’s a giant dwarf. Meaning he doesn’t belong. And that’s something that I think is very personal to him. And something that again, he’s searching for his place. And I think when he finds this ragtag group, he identifies them as similar to him, in a way that draws him. But even when he’s being drawn in, he always has one foot out the door still. And that’s the fun, that’s the beauty of the character, is you’re not quite sure what side he’s on and what he’s really playing at. But it always seems like he’s one step ahead.

Gad: I’m obsessed with Harry Potter. I grew up with the books, I grew up with the movies. There hasn’t been a Harry Potter in a long time. A new Harry Potter. This feels like the answer to that. I can’t tell you how many people come up to me, who tell me how important the Artemis Fowl books were to them as a kid. In many ways, I think Artemis is almost the antithesis to Harry. Whereas Harry is an empty vessel, who’s going on this journey of discovery. And there’s an innocence, that along the way becomes a little bit darkened by his experiences. Artemis starts, almost at the end of Harry’s journey. And Artemis is wise beyond his years, doesn’t have the magical abilities of Harry. So [he] has to compensate for it with an intellect that allows him to tap into magic. And at the same time, he’s very manipulative. And he uses that manipulation in order to amass this incredible plot. The writer once described this book as, “Die Hard with fairies.” Well, the Alan Rickman character, in many ways, is Artemis Fowl himself.

And that’s what’s so unique about this world. Is when do you get to see a kid, who is essentially an anti-hero in many ways? And we’re all trying to be one step ahead of him. But he has an uncanny ability to outsmart even the wisest amongst us. Which is why, when Mulch comes in, it’s such a fun loophole. Because he doesn’t expect them to throw something like this at them. So it’s really fun. And I think that again, it speaks to a crowd and an audience that is desperately longing for something to fill that void.

Artemis Fowl will begin streaming on Disney+ on Friday, June 12.

The much-anticipated Black Panther sequel is the crown jewel of the Disney+ schedule for February 2023. The streaming service (sign-up…
Movies 6 days ago