After drifting in space for almost a decade, it seems that Dead Space might actually be floating back into Earth’s orbit. The official YouTube channel for the Dead Space franchise has updated its profile picture for the first time in almost nine years, which is after eight years of total inactivity. While a seemingly innocent change, this combined with other reports seems to point to the franchise’s imminent return. Some newer reports even allege that it is all pointing to a remake of the first game. 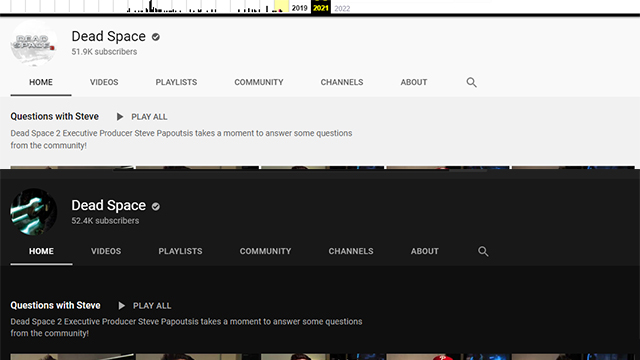 Of course, this does not prove anything, but it does appear to somewhat corroborate the reports of Electronic Arts’ efforts to revive the franchise in the near future. GameBeat’s Jeff Grubb and VideoGamesChronicle have both heavily implied that a Dead Space reveal of some kind was in the works and set to be shown at EA Play Live on July 22. Although small, changing a YouTube picture could be setting the groundwork for something bigger as updating dormant accounts usually happens for a reason.

It’s unknown if this alleged Dead Space game is some sort of sequel, remake, reboot, or something in the vein of Mass Effect Legendary Edition where the series is bundled together in an updated package. It might even be a combination of a few of those ideas. However, given that it’s Dead Space 2‘s box art — which is not the newest entry and is the highest-rated of the series — something more akin to an updated bundle of the first three numbered games might more probable. But VGC also alleges that a Dead Space reboot is coming and while it’s possible that both a trilogy remaster and reboot are in the works, it’s best to just wait for EA’s official word, which may or may not come on July 22.

PlayStation VR2’s launch lineup has slowly been growing over the last few months. Sony has now gone even further and…
Games 2 weeks ago

A new Killer Klowns from Outer Space: The Game trailer has been released, highlighting even more of the wacky and…
Games 2 weeks ago

The Dead Space remake releases on January 27, but that hasn’t stopped Motive Studio from putting out its launch trailer…
Games 3 weeks ago