“Little pig, little pig!” Have you been wondering what happened to you know who? The Walking Dead finally caught up with one of its most infamous characters this week. Last week’s episode took us a few months in the future, as we saw a post-Negan world. Even the Saviors were working with the other survivors for the common good. But Maggie nearly got herself killed in part because the Hilltop was feeding the Saviors and barely getting anything out of it. There were even some Saviors claiming “we are still Negan,” but not to Daryl’s face. The Walking Dead season 9 episode 2 revisits some of these old conflicts, while teasing the show’s newest threat. 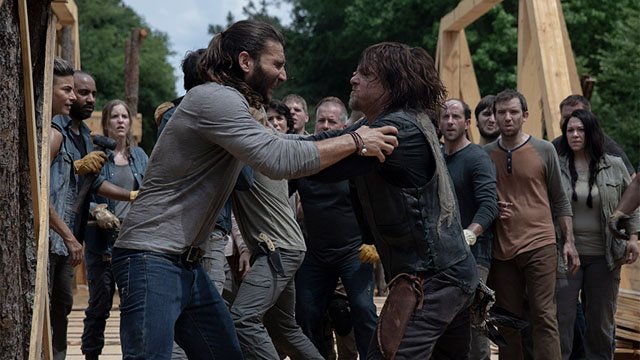 One month after the last episode, Rick visited Negan in confinement to tell him about the reconstruction of the bridge. The various communities, including the Saviors, were working together. Some more than others. While Gabriel began a flirtatious relationship with Anne, the Saviors’ Justin attempted to bully Henry. When Henry fought back, Daryl leaped to his defense and fought with Justin on the bridge. Later, Daryl grew upset at Rick, when he resisted sending Justin away. Daryl even implied that he and Rick aren’t on the same side anymore. 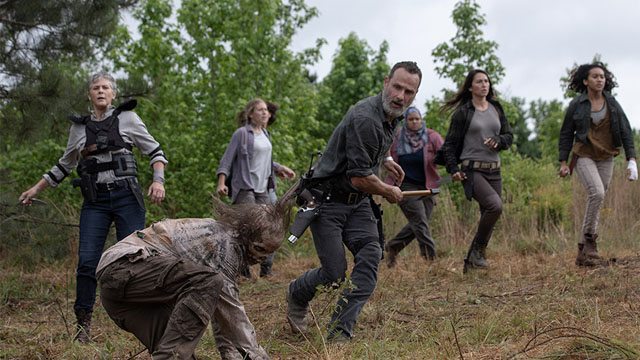 Somehow, all of this drama didn’t stop someone from giving Justin the job to draw the walkers away from the lumber crew at a critical moment. Everyone else did their jobs, but Justin was MIA. Rick and company raced to rescue their crew before they were overtaken by a herd, but Aaron’s arm was pinned under heavy lumber. When Aaron was freed, his arm was so grotesquely injured that his life was in danger. Daryl’s anger exploded when he discovered Justin’s responsibility for this fiasco. He beat the crap out of Justin until Carol intervened. Rick was also less than sympathetic to Justin, and he ordered him to leave their camp at dawn. Justin claimed that he wouldn’t even wait that long, and added that he wouldn’t stay if they begged him. 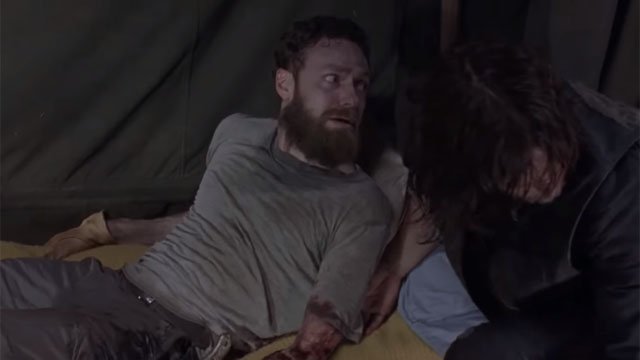 Enid reinvented herself as Siddiq’s medical assistant, and she had her trial by fire when she had to amputate Aaron’s arm. She couldn’t even give Aaron any painkillers because they wouldn’t kick in fast enough. Daryl helped Enid by holding his friend down, and Aaron made it through the ordeal alive if not intact. Rick also learned that none of the Saviors who walked off from the bridge construction had made it back to Sanctuary. 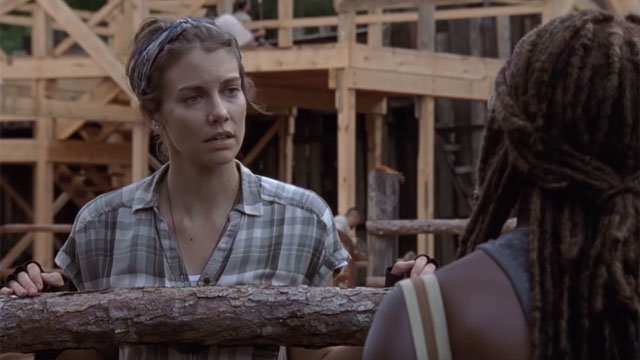 Something or someone was clearly targeting the Saviors, as their fuel shipments to the Hilltop never arrived. Michonne came to the Hilltop to convince Maggie to send the Saviors their excess food, but she initially refused. Maggie also visited Earl in the makeshift prison he constructed before he tried to kill her. At her insistence, Earl told Maggie that he was once an alcoholic who was redeemed by his wife’s love. Maggie was sympathetic to his story because her father also had battles with alcohol. She arranged for Earl to get a work release under supervision, since she didn’t fully trust him not to her attack her again. Maggie even relented to Michonne and sent the Saviors the food she had promised.

Later, Rick was heartened by the way the communities came together at the bridge. He couldn’t resist taunting Negan that the world was better off with him in prison. Negan shrugged off Rick’s words, and said that Rick was simply getting the world ready for his return. Elsewhere, Justin ran into someone he recognized on the road, moments before they attacked him.

What did you think about The Walking Dead season 9 episode 2? Let us know in the comment section below!

According to Variety, newcomer Anders Keith and The Boys star Jess Salgueiro have been tapped to join Kelsey Grammer in…
TV 23 hours ago

It was already confirmed that Hogwarts Legacy won’t have a mortality system. However, Avalanche Software has gone into more detail…
Games 22 hours ago

Yesterday’s announcement that DC’s Titans and Doom Patrol would be ending came as a bit of a shock, but while…
TV 2 hours ago

The Merc with a Mouth has officially entered the world of Midnight Suns. Firaxis Games is celebrating the occasion by…
Games 2 hours ago

Yesterday’s announcement that DC’s Titans and Doom Patrol would be ending came as a bit of a shock, but while…
TV 2 hours ago

A brand new The Walking Dead: Dead City synopsis for AMC’s forthcoming horror drama spin-off has been revealed (via FearHQ).…
TV 3 weeks ago