The Guardians of the Galaxy Holiday Special Review: Festive & Fun

Marvel fans are ready for a short break after Black Panther: Wakanda Forever marked the end of Phase 4. But unbeknownst to many, Wakanda Forever didn’t actually cap off Phase 4. The Guardians of the Galaxy Holiday Special drops Friday, November 25, on Disney+, and it serves as a feel-good wrap-up for the MCU’s first post-Infinity Saga phase.

Written and directed by James Gunn, who has headed the Guardians franchise since their first movie nearly a decade ago, The Guardians of the Galaxy Holiday Special sees the return of the cast of space misfits fans have grown to love. Chris Pratt, Dave Bautista, Karen Gillan, Pom Klementieff, and Sean Gunn all reprise their roles from the films, along with the voice talents of Vin Diesel, Bradley Cooper, and Michael Rooker.

Zoe Saldaña’s Gamora is currently in a bit of an awkward place in the MCU, as the version seen in the first two Guardians movies died in Avengers: Infinity War, while the one who exists in the main timeline now was plucked from 2014 during Avengers: Endgame and was last seen venturing off on her own. She does not appear in this special, and her absence is surprisingly not felt all that much. It will likely be much more prominent (and plot-centric) when Guardians of the Galaxy Vol. 3 rolls around next year, but with this being a one-off special about a small moment in time during the adventures of the remaining Guardians, she doesn’t really need to be there. As integral as Gamora is to the franchise, Gunn made the right call leaving her out.

The Guardians of the Galaxy Holiday Special picks up, presumably, sometime after the events of Thor: Love and Thunder. The Guardians seem to have made Knowhere their home base, and things seem relatively calm. Groot has grown considerably (though his new look is more akin to what one might expect from a costumed character at Disneyland’s Avengers Campus than what audiences have come to expect from his appearance in actual Marvel projects) and everyone is pretty happy with where they’re at.

Everyone except Quill. It’s that time of year when the holidays are approaching on Earth, and he’s feeling down due to a bad Christmas-related experience with his late father, Yondu, as a child. (Viewers get to see this interaction play out in animated form, which would be a fun touch if not for the animation quality being pretty poor.) 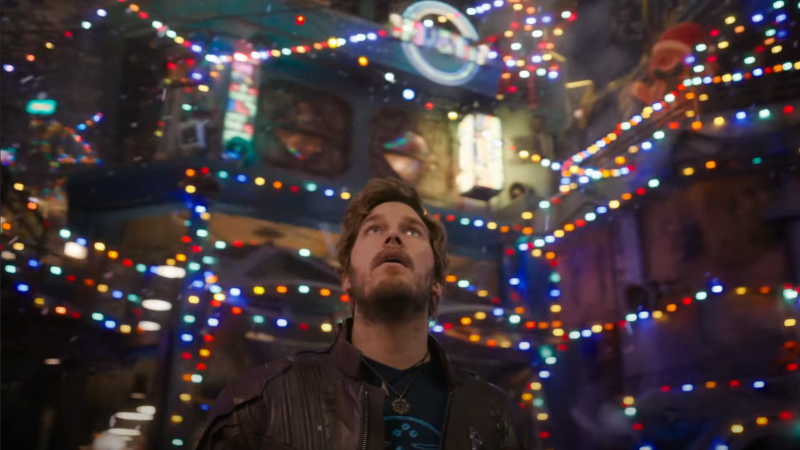 After Kraglin tells some of the other Guardians about this (Sean Gunn actually gets a decent amount to do as the character in this special, and it’s great), Mantis takes it upon herself to cheer Peter up by giving him a special Christmas gift, and with Drax in tow, heads down to Earth to find the one person Peter has idolized his entire life: Kevin Bacon.

I have always loved Mantis, but for those skeptical about how a special led by she and Drax can possibly work, it functions better than you might expect. Drax is still … Drax (not as insufferable as in Vol. 2 but not nearly as funny as in Infinity War) but Mantis manages to be a bit more well-rounded as the de facto “straight man” of the duo. That being said, she still gets some hilarious moments of her own and gets to showcase more sides of her personality than she was able to in any of her three previous film appearances. A recurring theme of Phase 4 has been supporting characters finally getting their time in the spotlight, and Klementieff proves her worthiness with this performance. She’s undoubtedly the star of this special, and it works incredibly well.

Kevin Bacon plays himself in this and ends up getting quite a bit of screentime. While he spends a good chunk of the special bewildered and frightened by the aliens who have come to capture him, he does get to exercise his comedic chops in a few scenes and even some musical ones, too. His appearance is certainly the biggest payoff from past Marvel projects in this special, but it isn’t the only one, so look out for another fun moment or two that connects to the MCU at large.

Speaking of which, it’s obvious the special isn’t going to be “required viewing” for Vol. 3 (though it does introduce Cosmo the Space Dog — voiced by Maria Bakalova — who will appear in the upcoming movie) but it isn’t something the uninitiated can just pop on and fully enjoy either. You definitely need to be familiar with the Guardians and their particular brand of humor and heart for this to hit the way it’s supposed to. While The Guardians of the Galaxy Holiday Special was made for the fans, it’s a fun sophomore outing for Marvel’s new “Special Presentations” brand of one-off stories.

And yes, wait until after the credits, especially if you’re a fan of some of the characters who get less to do in this one.

Disclosure: The critic received a screener link for ComingSoon’s The Guardians of the Galaxy Holiday Special review.

In a number of posts and replies across Twitter and Mastodon, DC Studios Co-CEO James Gunn revealed a bevy of…
Movies 1 month ago