The season finale of Ms. Marvel has landed on Disney+. After a strong start, this Marvel miniseries following the origin story of Kamala Khan took a turn for the worse with an underdeveloped narrative that didn’t quite find its footing. After a two-episode arc set in Pakistan, Kamala and her family are back in Jersey City, while Bruno and Kamran are on the run from the Department of Damage Control. This back-to-basics setup kicks off a satisfying finale in its own right, though it doesn’t quite make up for the flaws of the overall show.

“No Normal” begins with Agent Sadie Deever ordering non-lethal rounds to be used on the enhanced individual running loose in Jersey City. Kamala reveals her identity to her family, who already know, and there is a fantastic moment where we see her father’s concern for her. Of course, a Marvel season finale would not be complete without its hero getting a new suit and a new title. This episode has Muneeba giving her daughter a suit which she uses to travel through the city in a fun sequence where she utilizes her powers. The idea that Muneeba would be this open to her daughter becoming a costumed superhero after refusing to let her go to a party in the premiere completes her character arc, but feels like a bit of a stretch.

Abdullah helps disguise Bruno and Kamran in a funny moment where they have caps reading “Haram” and “Halal.” Kamala, Bruno, Kamran, Bahadir, Nakia, and Zoe arrive at the school and devise a plan to stall DODC. As Kamala draws her plan on a chalkboard and her drawings get animated again, Adil and Bilall’s direction shines through again. This small-scale sequence set in a high school where a bunch of kids are on the run is so entertaining that it feels like the entire show should have been this way. Everything about this sequence, complete with the moment Kamala and Kamran are about to kiss before getting interrupted by Bruno, feels like the ground-level coming-of-age superhero show we could have gotten.

The scene at the school is a fresh, amusing experience, as the teens fend off DODC agents with chemical foam, chairs, softballs, and fire extinguishers. The grounded nature of the episode’s writing is what the show needed, but as the stakes get more prominent, things get more nonsensical. It’s an unexpected turn to have Kamala needing to stop Kamran from harming people after their brooding romance. Still, the fact that Kamran ends up posing a very real threat to the DODC agents and the innocent civilians in the community makes the actions taken by DODC justifiable. The episode attempts to make the DODC led by Agent Deever the antagonist similar to Hayward in WandaVision, but it doesn’t quite work, as the DODC is trying to stop a genuine danger to the community. 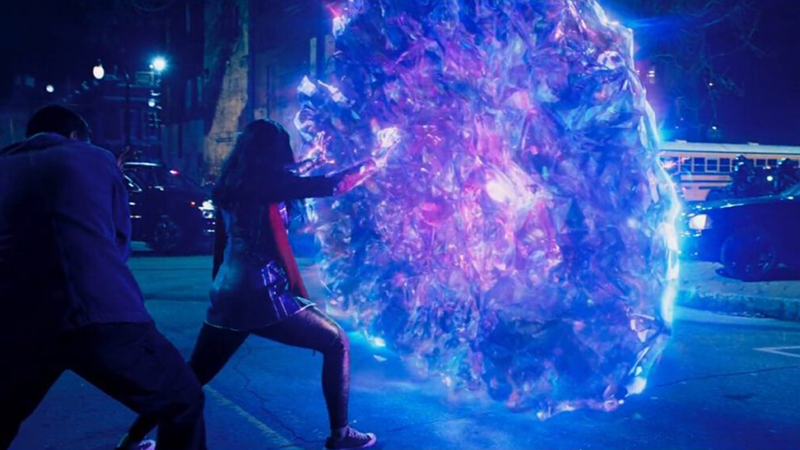 It also feels strange to have the potentially world-ending antagonist, Najma, killed off in the penultimate episode and have a much smaller threat as the antagonist of the finale. The show does very little to set up DODC as an opposing force during the previous episodes, and the result is a miniseries that battles with itself over what it wants to be. Ms. Marvel would have worked much better if the entire show had taken place in Jersey City and focused on a small-scale conflict that Kamala had to solve with her friends. The inclusion of the Clandestines and the Noor dimension with Kamala’s family history could have been briefly touched upon and explored in season 2, but with too many ideas crammed into a six-episode miniseries, none of it adds up to very much.

Deever is fired from her job at DODC for failing to follow orders to stand down, but her comeuppance is not satisfying because nothing about her character or motives were explored. The episode picks up in another tender moment when Yusuf tells his daughter what the name Kamala means. Upon learning that it means “marvel,” we have our new superhero name. It’s a wonderful idea to have Kamala’s mother give her her suit and her father give her her name. Bruno tells Kamala that her genes have a mutation and a riff from the theme of X-Men: The Animated Series plays. With this and the appearance of Charles Xavier in Doctor Strange in the Multiverse of Madness, it’s easy to expect that mutants will be joining the MCU, with Kamala being the first.

However, the show is not done yet; a mid-credits scene features Kamala getting blasted into her closet, and Carol Danvers (Brie Larson) stands up in her place, having swapped places with her. This is the show’s tie-in to The Marvels, showing how the two heroes are linked and setting up a film that will put these two with Monica Rambeau in an exciting sequel. “No Normal” closes out Ms. Marvel in a flawed yet satisfactory fashion that brings things back to the show’s stylish roots while emphasizing the issues that persisted in the entire show. Regardless, Iman Vellani is a rising star as Kamala Khan, and the show’s exploration of family remains a beautiful thing to behold.