Obi-Wan Kenobi was the upcoming show that I was most excited about upon its announcement. As someone who grew up with the Star Wars prequels, I was stoked to return to that era alongside Ewan McGregor and Hayden Christensen, who would be returning to their iconic roles. After a great start, the middle of the series started to sag, and there were a lot of awkward, weirdly-written parts. As such, it wasn’t clear how the finale would pan out, but for the most part, it gave me what I truly wanted from this series: closure between the characters of Anakin and Obi-Wan as they appear in the prequels and in the original trilogy.

What seemed to be an isolated series revolving around Obi-Wan as he protected Luke turned into more of a planet-hopping adventure involving Obi-Wan and Leia. That’s fine, even if it was unexpected, as Obi-Wan’s story was still intriguing and, expectedly, he was played to perfection by McGregor. While it’s not the more secluded story it looked like it was going to be, there were some excellent scenes, like the flashbacks to Anakin and Obi-Wan’s training sessions and the many nice moments between Obi-Wan and Leia.

But as was the case with The Book of Boba Fett, it was full of confusing and sometimes bizarre decisions. From small things like Leia very obviously hiding in Obi-Wan’s coat to major narrative beats like having two different characters survive torso stabs from a lightsaber, there was an underlying inconsistency that hurt the series. Some action scenes were done well enough, but many others were silly or lacking, which was most notably seen in the infamous chase scene from the first episode. There were great moments spread throughout most of the episodes, yet they kept getting undercut by these odd choices.

Admittedly, the finale suffered from a few of these moments, but the clash between Obi-Wan and Vader was the highlight of the entire show. Not only did it provide some stunning moments of action throughout the fight itself, but it further built upon the strained, emotional relationship between Obi-Wan and his former Padawan. Whether or not you’ve experienced The Clone Wars series or read supplemental novels, you could feel the complicated history between the two in this season-capping clash. 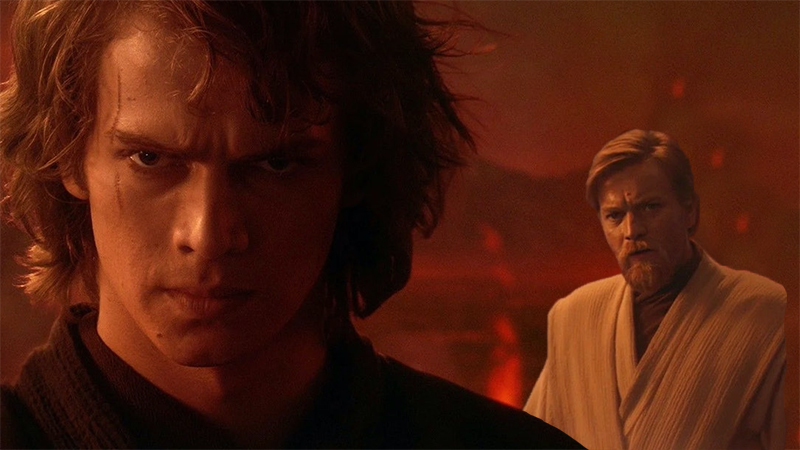 As someone who grew up loving Obi-Wan and Anakin’s adventures in the prequels, this battle was utterly gripping. From the first slash to Obi-Wan’s barrage of stones, there was real emotion behind every attack. Their complicated feelings for one another, from Vader’s blinding hatred to Obi-Wan’s undying determination, bled through effortlessly. These moves told the story through action, which is what turns a good action scene into a great one and is reminiscent of their final duel Revenge of the Sith in that regard.

These powerful swings came to a crescendo once part of Vader’s helmet was sheared off, which combined James Earl Jones’ Vader voice with Christensen’s Anakin. Anakin’s voice was no longer completely concealed, revealing his raw anger and the shell of the human he had devolved into. This literal and figurative unmasking gave Obi-Wan’s tearful response more weight, since he was finally able to connect to the man he feels like he failed; not the masked monster he had become. Seeing his face meant Obi-Wan could finally see his friend was gone and get the closure he had wanted since their duel on Mustafar.

It’s the thing that I was waiting for through the entire show, as announcing that the two were returning naturally implied there would probably be some sort of highly anticipated face-off. Even if they rarely (or never) met, the knowledge of one another’s existence could shape how they approach whatever conflicts arise throughout the series. And if they did meet, it would be an significant event, up there with the pivotal moments of The Mandalorian. While both of their meetings in Obi-Wan Kenobi were noteworthy, their dynamic was less prominent in the series overall than I had hoped. Reva’s story was decent and Leia’s importance was an unexpected joy, but Obi-Wan and Vader’s story was the beating heart of the show and that last episode was able to make good on that.

The final exchange between the two was heart-wrenching, and only prefaced the other exceptional parts of the finale. The last few scenes of Obi-Wan telling Leia about her parents, meeting Luke, and seeing Qui-Gon Jinn, provided every bit of interaction and development that Obi-Wan could have had to more fully flesh out his character outside of the context of Vader and in a post-Revenge of the Sith world. Obi-Wan has come to care a great deal for both Skywalker children, and is far less miserable than he was at the show’s inception. He has grown from a jaded and defeated former Jedi to a more hopeful and at-peace hermit. This development should have probably been more spread throughout the entire series, but it did at least make the finale more memorable.

Even though the series wasn’t what I expected, the finale was exactly what I wanted. If the whole show had fewer wonky writing choices and more of a focus on Obi-Wan but maintained this final showdown and the scenes that came after it, this could have been up there with The Mandalorian as the best Star Wars show. As it stands, it’s more than worth getting through the rougher episodes to reach the final part, as it’s a splendid Star Wars supplement that finally fills in the gap between the Obi-Wan and Darth Vader seen in Revenge of the Sith and their older counterparts in A New Hope.

Best of 2022 is ComingSoon’s weeklong celebration of the entertainment that made this past year so memorable. 2022 was a…
Anime 4 weeks ago

Best of 2022 is ComingSoon’s weeklong celebration of the entertainment that made this past year so memorable. In 2022 I tried to…
TV 4 weeks ago