A sexploitation of Marilyn Monroe’s life is coming to Netflix. Andrew Dominik writes and directs Blonde, a historical, psychological drama based on a 2000 novel written by Joyce Carol Oates. This movie is a fictionalized look at the life of Norma Jeane Mortenson, or as the world would know her, Marilyn Monroe. A searing look at the treatment of one of Hollywood’s most iconic sex symbols results in a terrific telling of a tall tale sure to polarize audiences on the morality of it all.

Blonde has received considerable attention for its NC-17 rating. This is a rare occurrence and one that only feels partially justifiable. Despite the reasonable apprehension that goes with a movie with this rating, it received a 14-minute standing ovation at its Venice Film Festival premiere — an indicator of its effect on its audience. The movie opens with Monroe in her iconic white dress, standing on the subway grate in all her glitz and glamour. However, this production is not a showcase of her success; instead, it is a showcase of her pain and suffering, and it never lets up.

Opening with a look at Monroe’s tragic childhood with a mentally unstable mother, Dominik instantly clues you in on the fact that this movie will be hard to watch. While some have criticized the film for being uncomfortable and painful to witness, that most certainly was the intention behind this movie and it is very effective. Parts of Blonde will have you covering your eyes as you cannot bear to witness the brutality of all of it, but Dominik handles the scenes well for the most part. His directorial style is exquisite, switching between aspect ratios, black and white, and color to create a wholly original experience.

Blonde displays the sexualization that Monroe faced in Hollywood at a time when her sex appeal was all the world could see. It explores how men in the industry never treated her with respect and how the world’s perception of her was generally blissfully ignorant of everything happening to her behind the scenes. Dominik does an excellent job writing Monroe’s emotions, displaying how the blonde bombshell pop culture icon was a façade for the cameras that differed strongly from Norma Jeane Mortenson. Additionally, the film depicts the pay gap between her and her co-stars and everything going through her head in this dramatized illustration of her psyche.

Ana de Armas is a tour de force in Blonde. After being criminally underused in The Gray Man earlier this year, she delivers on every level with a powerhouse of a performance. This performance is awards-worthy, as she looks and sounds the part, displaying every expression of pain on her face. This is a tragic, upsetting role where she knocks it out of the park. While the well-casted Hollywood biopic has been on the rise recently, none of them are quite like this. She and every supporting cast member are at the top of their game and Dominik gets the best performance out of everyone. 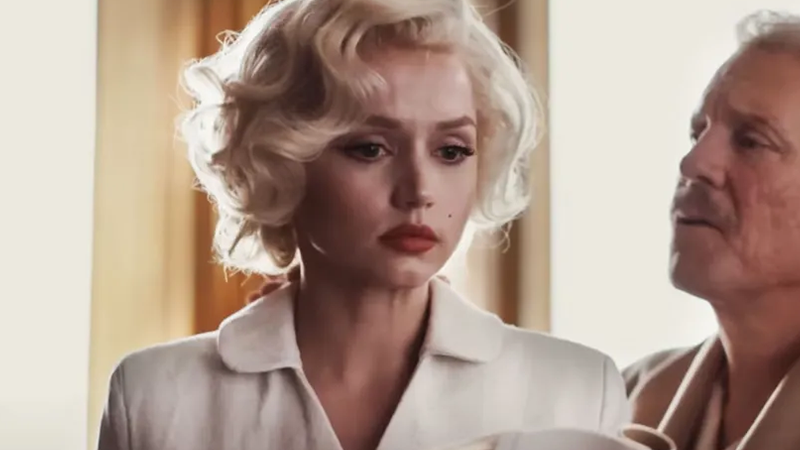 The aspect of this movie that may rub many people the wrong way is the nudity. De Armas has many unclad scenes in Blonde, which some may see as an exploitation of her sexuality. As a result, some will say the film commits the exploitation it is trying to condemn. That being said, I never saw the nudity in this film as an example of the male gaze, nor did I feel like Dominik was needlessly sexualizing de Armas’s body. Many scenes with de Armas’s nude body are not intended to arouse the audience. Instead, the nudity feels like an expression of her vulnerability amid her trials and tribulations.

Furthermore, the story loses itself a little in its final act and the supporting characters tend to come and go with little explanation or care given to them. However, Blonde is a bold, unrelenting look at a pop culture icon. It won’t be lauded for its historical accuracy, but it offers a graphic depiction of her jaw-dropping life. It’s entirely understandable to object to the brutality of the film’s subject matter, but there is still so much about this film to marvel at — even if you’ll feel gross for watching it and will never want to see it again.

Movies are attractive. Sometimes, it’s the fresh premise. Other times, it’s the esteemed director behind the wheel. However, nothing is…
Movies 6 days ago

The Blonde release date on streaming is upon us. In a matter of days, the much-anticipated movie on the spectacular life of Marilyn…
Movies 4 months ago