A24’s horror movies don’t often come out quite like this. Whether it’s the haunting presence of Hereditary or the slasher thrills of this year’s X, A24 has a reputation for its terrifying horror movies. However, this one serves as a unique addition to their ever-growing filmography. Bodies Bodies Bodies is a black comedy slasher about a group of young, rich friends throwing a hurricane party at a mansion. They begin to play a murder mystery game called Bodies Bodies Bodies, but things take a turn for the worse when real blood is shed.

This is a surprisingly fun slasher movie with a dark twist. We’ve seen slashers combined with the comedy genre in films like Scream and Happy Death Day, but this movie takes a much more unique and edgy approach. The film does away with the standard killer in a creepy mask, instead having a bunch of Gen-Z friends trapped in a psychologically stressful game of whodunnit. Bodies Bodies Bodies feels like a modern-day Clue, throwing colorful characters into one confined space and forcing them to work together to find out who amongst them is a murderer. Everything plays out in suspenseful, riveting ways, even if there are parts of the film that come up short of what director Halina Reijn wanted to accomplish.

Early on, the movie sets up the romantic relationship between Sophie (Amandla Stenberg) and Bee (Maria Bakalova), who head to a mansion party. The first act has fun with the absurdity that these rich friends are celebrating a hurricane, and this ultimately comes back to bite them when they find themselves stranded in a large house with a killer on the loose. The set of characters isn’t what you would typically expect, as they are all intoxicated for most of the runtime — even when the inciting event occurs. 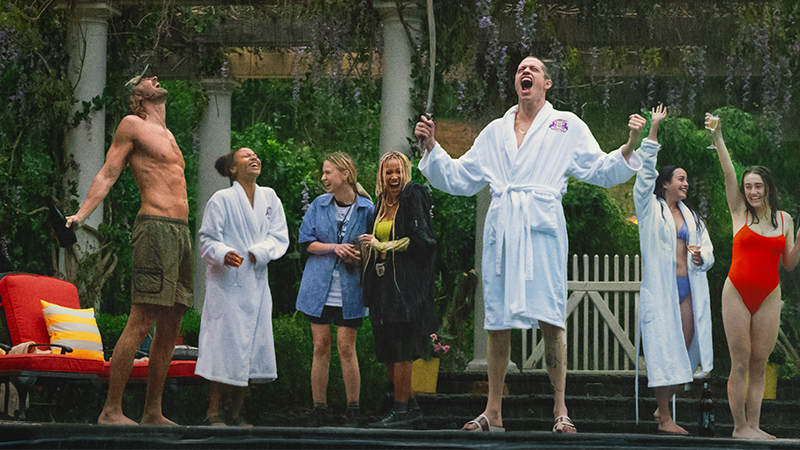 Bodies Bodies Bodies is a Gen Z murder mystery with an all-star cast. Stenberg gets a lot of time to shine as the protagonist, who has a lot of emotional weight to carry throughout. Bakalova brings her Oscar-nominated talent to the movie as a character feeling out of place in this group of neurotic, technologically-obsessed friends. Pete Davidson also gets a lot of humorous dialogue, all of which feels like it was improvised. Chase Sui Wonders has a tough job to nail, as her character is the most aggravating throughout the film. Despite this, she has to get the audience on her side, which she mostly succeeds at.

The issue with having an edgier group of characters where everyone is intoxicated is that the characters’ behavior can be irrational to the point of irritability. The characters are not always likable due to their rash decisions, but writer Sarah DeLappe made an effort to give the characters backstories and relationships that get used to heighten conflict. Furthermore, as everyone is on edge with each other, it’s a highly unpredictable film where it is genuinely difficult to guess who the killer will be. By the time our final act arrives and we get our twists and turns, you’ll be in shock.

The movie has its issues. A never-ending series of 2022 lingo can feel forced and distracting, as the characters can be written very stereotypically — almost to the point where they sound like parodies of themselves. However, beyond all that, Bodies Bodies Bodies offers a surprising amount of fun with its dark humor and razor sharp wit. The performances are engaging, the location is claustrophobic, and it has a killer twist that will catch you by surprise.

Six months after the release of Ti West’s elderly slasher movie, X, West gives us a prequel centered around the villain…
Movies 5 months ago

ComingSoon spoke to the director of Bodies Bodies Bodies Halina Reijn, about the upcoming dark horror comedy, which is out in theaters on…
Movies 6 months ago