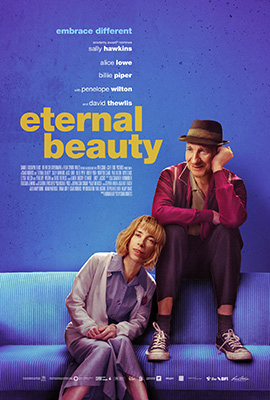 Written and Directed by Craig Roberts

Exploring the world of mental illness in film is really a tricky balancing act and many have succeeded in telling their tales, such as One Flew Over the Cuckoo’s Nest, Shutter Island and Silver Linings Playbook while others drop the ball in misunderstanding how to respectfully depict their central subjects and while Craig Roberts certainly creates charming and fairly sympathetic characters in Eternal Beauty, he unfortunately fails to give them any meaningful story or development to go with it.

As she struggles to get her life back on track following being jilted at the altar by her fiancé and falling into a state of despair, schizophrenic Jane (Sally Hawkins) finds new sources of love and live while receiving treatment, changing her life for the better and for the worst.

The concept of a broken woman being able to break free from the shackles of her illness solely through the prospect of love is a tale frequently told on the big screen to varying results and Roberts falls very much in the middle in chronicling the life of Jane. The first act or two of the film proves to be a quirky and offbeat delight, one born from the tightrope nature of the viewer deciding whether to sympathize for the protagonist or laugh along with her odd behavior and antics, but as it progresses, it too often can’t decide which it wants the audience to do.

From attempted kidnappings of her nephew to appease an unknown voice over the phone to hallucinations of nefarious radio messages, it feels like an honest portrayal of the dangerous and heartbreaking confusion that spawns from the mind of a schizophrenic and yet the story plays such a teeter-totter with both Jane’s state of mind and the events in the story it’s hard to decide where our own minds should lie.

Roberts is no stranger to the world of dramedies, breaking out with his performance in Richard Ayoade’s 2010 hit Submarine, but yet it seems like his experience in front of the camera doesn’t carry over behind it when it comes to juggling its two drastically different tones. When it’s clear it wants to be a dark comedy in the vein of Harold and Maude, it works nicely, when it wants to be a powerful exploration of mental illness akin to A Beautiful Mind, it’s devastatingly real, but there’s too much that feels like it can’t decide which it would like to be that results in a relatively disappointing affair.

That doesn’t mean that there aren’t positives to the film, however, as Jenkins delivers what could be an Oscar-worthy performance as Jane, never letting her character break even in the slightest and fully committing to the eccentric behaviors that come from her mental illness. She is further joined by an always-brilliant David Thewlis, whose role may prove much more minimal than some may expect or desire but is an absolute delight to watch every moment he gets on screen.

While he may struggle with the tonal balancing act of the story, Roberts’ directorial eye is nothing short of beautiful as the 29-year-old Welsh filmmaker delivers a number of stylish and compellingly shot moments throughout the film and utilizing a simple-yet-rich color palette that gives the film a vibrant look even in the most dour of scenes.

Though the film may contradict a number of its own messages and add up to practically nothing in the end in the way of character development of compelling storytelling, Roberts delivers a relatively charming atmosphere, some nice offbeat humor and a stellar performance that Jenkins that keeps Eternal Beauty from sinking entirely.

Netflix has announced the official schedule for its forthcoming summer movie slate, comprised of the highly-anticipated original films including: The…
Movies 10 months ago

Sing a Bit of Harmony Review: A Beautiful Exploration of A.I. and Happiness

Sing a Bit of Harmony is the latest anime film to hit U.S. theaters. However, Funimation’s first co-production (which was…
Anime 1 year ago

Marvel Studios’ Eternals introduced a handful of brand-new characters into the Marvel Cinematic Universe. However, during the post-credits scene for…
Movies 1 year ago