Death of Me Review: A Dull Retread of Genre Clichés 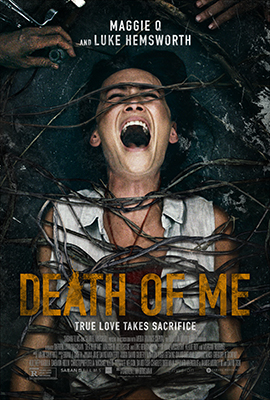 Death of Me Review:

As people sit trapped in their homes, the horror genre has offered a number of options over the past few months, with everything from the chilling Zoom séance Host to the Weird Western The Pale Door, and while we may have to wait a little longer for Darren Lynn Bousman’s return to the Saw franchise, his latest film Death of Me whisks audiences overseas for a clichéd and unscary tale of death and reanimation.

Vacationing on an island off the coast of Thailand, Christine (Maggie Q) and Neil Oliver (Luke Hemsworth) awake hungover and with no memory of the previous night. They find footage on Neil’s camera, and watch, horrified, as Neil appears to murder Christine. With twenty-four hours until the next ferry and a typhoon threatening the island, Christine andNeil attempt to reconstruct the night’s events—and are snared in a web of mystery, black magic, and murder.

One of the most disappointing things about the film is that its set up is actually a really intriguing and fairly unique one for the genre, opening almost as a horror twist on The Hangover as Christine and Neil wake up in their trashed hotel room feeling the rough night that preceded, especially when we’re treated to the footage of the suspicious-acting locals at the nearby bar and the video footage of Neil strangling Christine, snapping her neck and burying her.

The unfortunate thing is that as the film progresses with their investigation, this compelling premise quickly falls apart and becomes an over-the-top affair that can’t even deliver on some good sights with its near-frequent hallucinations. Though some disfigured faces seen near the middle of the film certainly prove to be a chilling sight, the extent of screen time they get without any real action involved results more in a failed gotcha moment than it does an unsettling confrontation. Even worse is the frequent appearance of people with what’s clearly black duct tape over their eyes, which doesn’t create a moody atmosphere or scary effect but instead makes for some unintentionally hilarious moments.

The way the plot progresses is also nothing really original, feeling a lot like Robin Hardy’s The Wicker Man — which it even makes reference to in a throwaway line of dialogue — but without any of the tense pacing or unpredictability of the British classic and a far worse ending. So much of the film just feels like it is trying to hammer audiences over the head with themes of femininity and generational community and it just becomes more and more uninteresting as it goes.

Having started his directorial career with the first three installments in the Saw franchise and delivering everything from the goth rock horror musical Repo! The Genetic Opera to the psychological thrills of the Mother’s Day remake, Bousman normally displays a strong grip on atmosphere but none of that is here. It feels so much like he is going through the motions and just churning through the script without any kind of passion or energy, only further diluting its potential and amplifying its boring nature.

It’s also a real shame to see Maggie Q, a great actress who delivers a fairly solid turn in the film, have another “trapped on an evil island” story crumble around her, especially in the same year after the atrocious Fantasy Island earlier this year. She’s an actress with so much potential as both an action star and powerful performer and yet two of her three films this year alone have just wasted really good performances from her on clichéd and unoriginal lack-of-fright fests.

Death of Me starts out with great promise of an intriguing plot and potentially creepy, or at the very least eerie, sights but all we’re given is a meandering and uninteresting series of events with overblown music, one good performance and a terrible ending that leads audiences wondering what was the point of any of it.

Death of Me is now available in select theaters and on digital platforms and VOD.

The much-anticipated Black Panther sequel is the crown jewel of the Disney+ schedule for February 2023. The streaming service (sign-up…
Movies 15 hours ago

ComingSoon is excited to debut the Death Hunt trailer for director and writer Neil Mackay’s upcoming film, which releases on DVD and Digital…
Movies 8 months ago

Marry Me Review: An Enjoyable Rom-Com

Love is in the air this Valentine’s Day as a new romantic comedy arrives in movie theaters. Marry Me follows…
Movies 12 months ago

The schedule for the new movie and TV titles coming to Hulu in October 2021 has been revealed, which you can view…
TV 1 year ago

Charlie Clouser Reveals the Secrets Behind His Exciting Score for Spiral

The horror film is now playing in theaters!
Movies 2 years ago