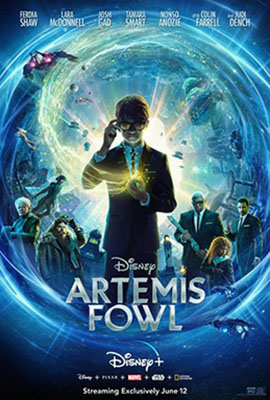 Colin Farrell as Artemis Fowl I

Eoin Colfer’s 2001 young adult fantasy novel Artemis Fowl was one of the most unique and thrilling tales in a time when J.K. Rowling’s Harry Potter series was dominating the literary world and after nearly 20 years of development hell and a theatrical release delay due to global events, Disney has finally brought their adaptation to life and if this is the standard audiences can expect for other films from the House of Mouse skipping theaters, we better start keeping our expectations low.

Based on the book series and character of the same name, the story details the adventures of Artemis Fowl II (Ferdia Shaw), a 12-year-old Irish prodigy who teams up with his family’s faithful servant and bodyguard, a kleptomaniac dwarf and a fairy reconnaissance officer looking to prove herself to help rescue his father, Artemis Fowl I, who has been kidnapped by a gang of fairies looking to reclaim a mysterious weapon known as the Aculos that the Fowl family is accused of having stolen.

Rather than strictly adhere to adapting the first novel in the series, the film attempts to blend the stories of the first and second books, but even as someone who hasn’t read the novels, there’s a lot of interesting and unique elements lost in the process. The first novel’s story may be notable for hitting convoluted plot points but still as a whole received praise for keeping things sailing smoothly for all audiences and yet in a clear ploy to try and build a franchise out of the novels, the script chooses to haphazardly throw things together and leave various elements vague for future sequels.

The supposed villain of the whole film initially appears to be the mysterious Opal Koboi, and yet we learn nothing about them or their motivations aside from a desire to acquire the also mysterious weapon stolen from the fairy world. It feels all-too-similar of a setup to Warner Bros’ Harry Potter film franchise, teasing Voldemort and his powerful wizardry throughout while keeping him in the dark, and thus marks one of the numerous elements that feels like a pale imitation of other and better franchises.

The semi-existence of Opal also connects to the bizarre balance of characters throughout the film, with many being introduced as vital to the story only to subsequently disappear for stretches of time and suddenly reappearing in others, most notable of which is Tamara Smart’s Juliet Butler, niece to Nonso Anozie’s Domovoi. When Josh Gad’s Mulch Diggums first introduces her, she appears to be a clever and frankly badass foil to the titular hero and is credited as being a major asset to him, and yet she’s tossed to the side for a majority of the story, only to pop back up again when things get dangerous for all of the group.

Alongside the major character imbalances and uninteresting plot development, the script also loses the all-ages feeling of the source material and instead feels like it’s talking down to the audience and over-explaining every little thing to excruciating levels. The sheer number of times a character said the term “Aculos” became infuriating and incredibly irritating, almost as if it was trying to set some kind of record for the most times a fake word has ever been spoken in a film or replacing every possible swear word with just Aculos. Consistently describing the Aculos as “mysterious and powerful and potentially world-threatening” felt nonsensical and over-bearing, trying to force some stakes down audiences’ throats rather than just letting them flow out naturally.

One would think given Kenneth Branagh’s talent behind the camera on a number of blockbuster projects, you would figure at the very least he could bring an energetic and stylish look to the project to keep it at least mildly entertaining, but that would be a wrong assumption. It’s certainly energetic and keeps things moving, but never truly feels gripping or fun, instead presenting everything as straightforward as possible and leaving out much of the magic of the source material. Even the visual effects themselves don’t feel very breathtaking or unique given the inventive elements of the fantasy world, the film $125 million budget and Branagh’s colorful work on the first Thor film, just adding to the blandness of the whole affair.

The performances from its minor ensemble are also nothing to truly speak about, with the only good performances coming from Lara McDonnell, Smart and Anozie. Shaw isn’t necessarily an unlikable lead, but be it the script or him as an actor, he never really taps into the witty or compelling nature of the character, instead coming off relatively uninteresting and non-compelling.

Artemis Fowl is a source material rife with potential for a franchise that rivals the wizardry-based world of J.K. Rowling and despite a few likable performances and keeping some of the novel’s structure in place, the long-awaited film adaptation falls flat with a script that is entirely devoid of the magic or originality of the novel.

Movies and TV shows that adapt books to the screen don’t always get it right. However, for some books, there…
TV 6 months ago

The long-awaited adaptation of Eoin Colfer's bestselling novel is available to stream on Disney+ now!
Movies 3 years ago

The One and Only Ivan Set for Disney+ Streaming Debut

The long-awaited adaptation of K.A. Applegate's iconic novel is set to debut on August 21
Movies 3 years ago