ComingSoon.net got the opportunity to chat with star Tamara Smart to discuss Disney’s adaptation of the beloved Eoin Colfer 2001 fantasy novel Artemis Fowl, including building an on-set family and revealing her original audition for a different role entirely.

When word came around of the project looking to build its cast, Smart recalled that “the name really piqued my interest” as she had heard of the book series around her school but had never taken the time to read them. However, after doing the first couple of auditions she decided to dive into the first novel, while also learning she was being eyed for a different role than she originally thought.

“I did my first couple of auditions and read the book and it was great, I could not put it down and I started reading some of the other ones and each of them just got better than the last one,” Smart recalled. “I said to myself, ‘Even if I don’t get the part, I am 100 percent going to watch it.’ After the audition, I found out that I didn’t get Holly, but I found out that Ken wanted me to play Juliet, which was just humbling and I felt really, really grateful for it. I think it was sort of weird but in the best way. I think it was something that was really different for me because it happens once in a blue moon where you get a different part after auditioning for one part, but it was fun. I got to adapt my own sort of character and come into a new one and I think Juliet fit my characteristics more than Holly did, so I was super happy to find out that Laura was going to be playing Holly because I knew I had a familiar face on set.”

In the film, Smart stars as Juliet, niece to Nonso Anozie’s Domovoi “Dom” Butler and best friend to the titular criminal mastermind and in looking back at building the rapport with both Anozie and newcomer Ferdia Shaw, she warmly described it as “amazing” and saying they were “a really big family on set.”

“I think it was really interesting, Ferdia is definitely a character, he is so much like his character, he’s witty, so funny, so smart and just a joy to work with,” Smart described. “With Nonso, he was like my real uncle, he was super sweet, he was a real love on set, he loved finding new things to do to make sure it’s not just a fine job.”

In a film full of explosive action set pieces and in taking on a character with lots of physicalities, Smart notes that the physical side of the production was her biggest creative challenge, with some of the set pieces being the first few things she shot while also looking back at one sequence with her on-screen uncle as her favorite to film.

“That was really, really hard and two weeks before I had to do two weeks of training for it,” Smart explained. “I think it was sort of like my first big role, so it was really important for me to show every emotion in that movie. I got to do a lot of my own stunts, I was very lucky that I did. I can not take credit for all of them, because some of them I really couldn’t do, but I’m a pretty sporty person so when I went into the first day of stunt training, I was really confident. I was like, ‘I’ve got this,’ and I was in there for five minutes and was like, ‘How do people do this for a day, let alone two weeks?’ But I did the two weeks, I got through it and seeing them on screen was so worth it. I would have to say my favorite stunt was the kendo scene with Nonso, that was my absolute favorite scene, because I think that was when we were doing most of our own stunts and we were out there for hours filming in the cold but it was super fun and definitely 100 percent worth it once I watched it.”

Though critics and audiences have not taken too kindly to the film, some are still wondering if Disney will go through with their original plans of building a franchise off of it and continue to adapt the rest of the novels in the series, to which Smart is very hopeful and ready for. 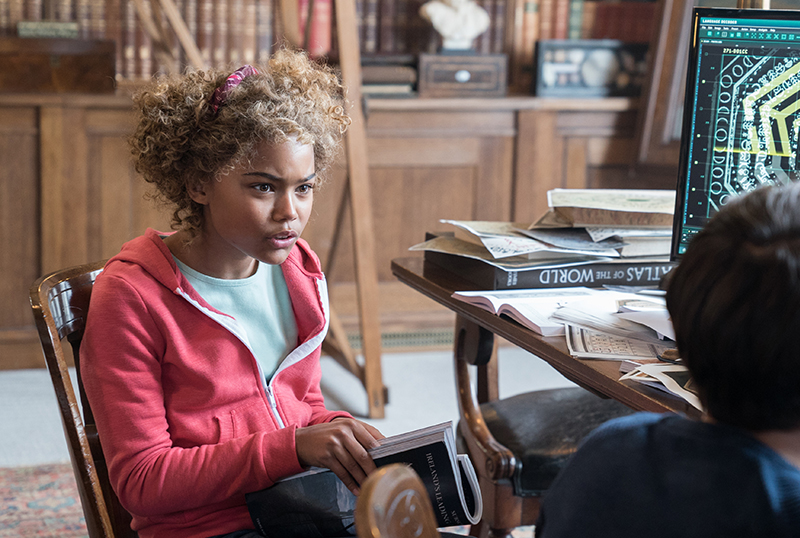 “100 percent, 100 percent, I think we got to see a bit of Juliet in this movie and I’d love to see where her part goes from here,” Smart opined. “I’ve read the books and I love where her journey goes from the second book onwards, so yeah I would love to do a second movie.”

One of the big criticisms the film has faced since its release is the deviations from the source material, despite author Colfer’s open support about some of the liberties taken with his novel, and Smart feels the same as the Irish novelist.

“I know that I love our version of the movie, because I think that every movie is different to a book in the little ways and big ways and I think that the choices that we make in this movie were maybe something that was different to the readers and what the readers would’ve liked, but I think we came with the best cast ever,” Smart noted. “I think those changes are really worth it to serve the movie.”

When looking back at her time on set working alongside director Kenneth Branagh, who has made a name for himself in the past decade in blockbuster directing on projects such as Thor, Cinderella and Murder on the Orient Express, Smart describes the five-time Oscar nominee as “a force of nature.”

“He was such an inspiring person on set and it was so interesting seeing him become his creative side and I think he really urged me to tap into my creative side and think outside of the box and do different kinds of things and let the scenes flow out,” Smart described.

Prior to the global quarantine, the House of Mouse had originally set the film for a theatrical release in May before choosing to shift the film to its fresh streaming platform Disney+, which Smart recalled feeling “very shocked” initially upon the news but found the bright side in the decision.

Having become a fan of the novels after signing on for the film, Smart initially takes a moment to think on which of the eight books she finds as her favorite, deciding on the first and fourth as her top favorites, notably the latter’s featuring a return of iconic villain Opal Kobai.

“I think I just love Opal Kobai, I love her character and I think that storyline is the funnest ones I’ve seen and I sort of love the fact that they were all grouped together,” Smart noted. “They sort of get fooled by Opal, they don’t really know that she’s back and I think that’s sort of the first time we see them be challenged by someone.”

Based on the beloved book by Eoin Colfer, Artemis Fowl is a fantastical, spellbinding adventure that follows the journey of 12-year-old genius Artemis Fowl, a descendant of a long line of criminal masterminds, as he seeks to find his father who has mysteriously disappeared. With the help of his loyal protector Butler, Artemis sets out to find him, and in doing so uncovers an ancient, underground civilization—the amazingly advanced world of fairies. Deducing that his father’s disappearance is somehow connected to the secretive, reclusive fairy world, cunning Artemis concocts a dangerous plan—so dangerous that he ultimately finds himself in a perilous war of wits with the all-powerful fairies.

Directed by Kenneth Branagh, the book was adapted for the screen by award-winning playwright Conor McPherson. Artemis Fowl is produced by Branagh and Judy Hofflund, with Matthew Jenkins and Angus More Gordon serving as executive producers.

Branagh brings back several members of his creative team, including Haris Zambarloukos, director of photography; Jim Clay, production designer; Patrick Doyle, composer; and Carol Hemming, hair and makeup designer—all of whom worked on Branagh’s 2017 directorial project, Murder on the Orient Express. The costume designer is Sammy Sheldon Differ (Assassin’s Creed), and the film will be edited by Martin Walsh (Wonder Woman).

Interview: Troy Baker on Voicing Batman in Battle of the Super Sons

ComingSoon spoke to Hypochondriac star Paget Brewster about Addison Heimann’s thriller, which is out August 4 on demand and digital. Brewster spoke…
Movies 6 months ago

The latest Liam Neeson-led action film Memory is out in theaters today. Directed by the legendary Martin Campbell, the film stars Neeson,…
Movies 9 months ago