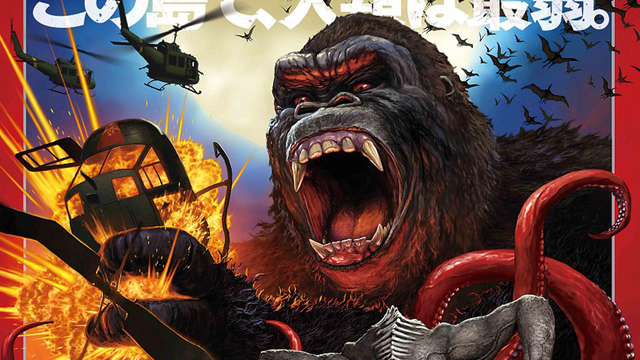 “Can we talk about how great our Japanese Kaiju poster is?” the director asks on Twitter.

Check out the Japanese Kong: Skull Island poster in full in the gallery viewer below and catch the Legendary Pictures and Warner Bros. Pictures release in regular and IMAX theaters March 10.

A trip back to the mysterious and dangerous home of the king of the apes, the new film will follow a team of explorers who venture deep inside the treacherous, primordial island to find the leader’s brother and a mythical serum, confronting extraordinary creatures along the way.

Directed by Vogt-Roberts, Kong: Skull Island is scripted by John Gatins and Max Borenstein. Legendary’s John Jashni and Thomas Tull are producing alongside Mary Parent. Legendary has promised that the story will honor the foundations of existing King Kong lore, but will place Skull Island in an entirely new, distinct timeline.

IMAX is also delivering a cool poster design domestically. Just after the new poster in the gallery viewer below, you can take a look at a special design that pays homage to Francis Ford Coppola’s Apocalypse Now.

What do you think of this Japanese Kong: Skull Island poster design? Are you planning to check out the film when it hits theaters next month? Let us know your thoughts in the comments below!

There’s no denying that Phase Four of the Marvel Cinematic Universe was a disappointment. Most of the new wave of…
Movies 4 hours ago

Legendary has finally revealed the official cast and synopsis for its upcoming Godzilla vs. Kong sequel, which will be the…
Movies 5 months ago

As part of Netflix Geeked Week 2022, Netflix and Legendary Entertainment have released the first image from the Kong: Skull Island…
Anime 8 months ago

Nearly a year after the theatrical release of Godzilla vs. Kong, it looks like Legendary has already started the pre-production…
Movies 11 months ago