Universal Pictures has officially announced that Jon M. Chu’s long-in-development film adaptation of the Broadway musical Wicked will now be divided into two parts, in order to accommodate its massive story and remain true to its source material. Both movies will have a Christmas release date, with the first one arriving on December 25, 2024, while the second hits the theaters on December 25, 2025.

Chu took to Twitter to share his statement about the announcement, where he shared the reason why the film adaptation has to be split into two parts. With this development, the In the Heights filmmaker promises to bring more depth to the beloved characters’ story.

“As we prepared this production over the last year, it became increasingly clear that it would be impossible to wrestle the story of Wicked into a single film without doing real damage to it,” Chu said in a statement. “As we tried to cut songs or trim characters, those decisions began to feel like fatal compromises to the source material that has entertained us all for so many years. So we decided to give ourselves a bigger canvas and make not just one Wicked movie but TWO!!! With more space, we can tell the story of Wicked as it was meant to be told while bringing even more depth and surprise to the journeys of these beloved characters.” 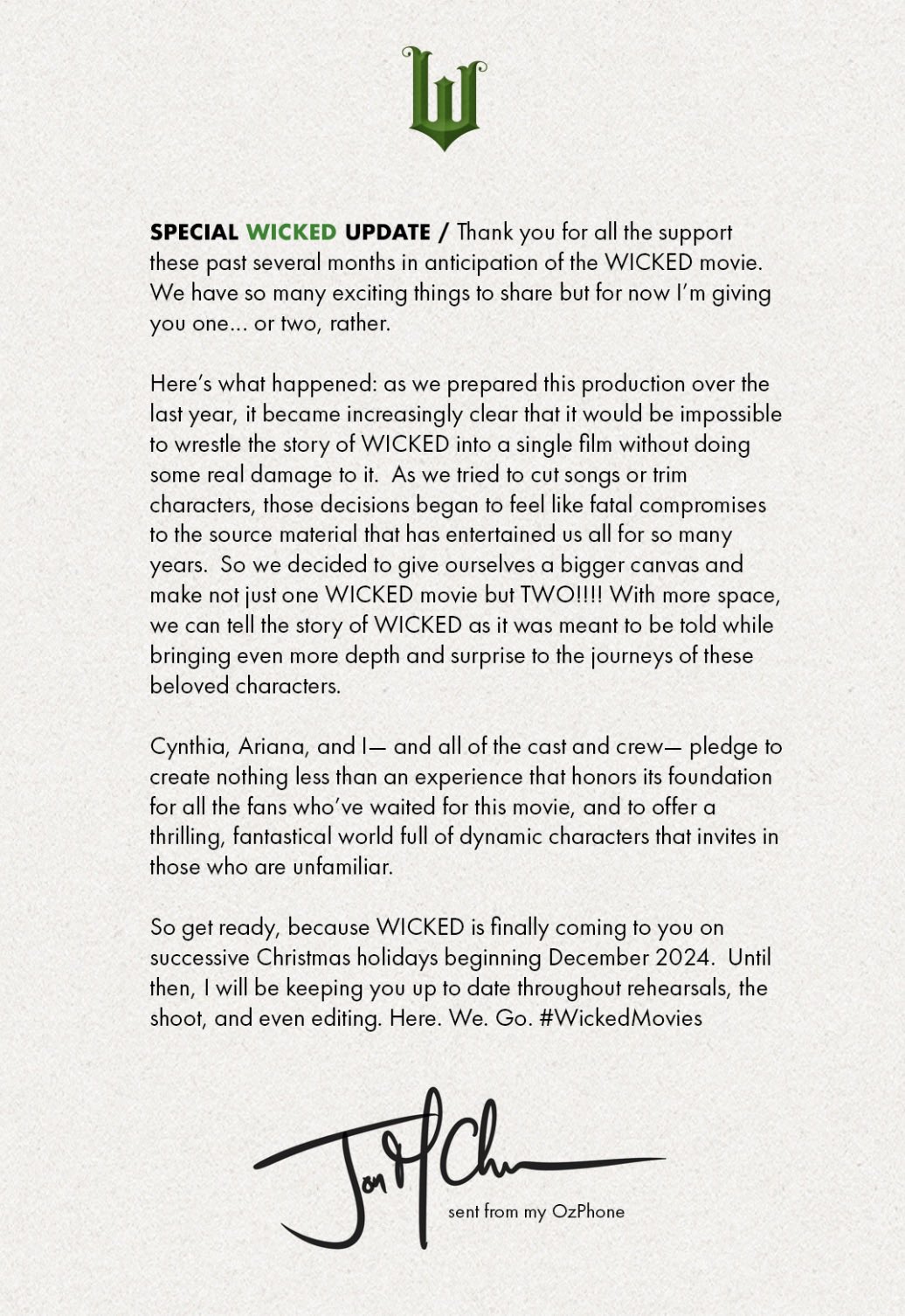 Based on Gregory Maguire’s bestselling novel and the Tony-winning stage musical, The Wicked movies will tell the untold story of the Witches of Oz be led by Cynthia Erivo as Elphaba and Ariana Grande as Glinda. It will be directed by Jon M. Chu from a screenplay written by the musical’s book writer  Winnie Holzman and three-time Oscar-winning composer and lyricist Stephen Schwartz.

Michelle Yeoh is joining the star-studded cast of the upcoming Wicked film adaptation, according to a recent report from Variety. …
Movies 2 months ago

Jeff Goldblum is in final talks to join the cast of the highly anticipated film adaptations of Wicked, with Variety…
Movies 3 months ago

According to Collider, Bridgerton breakout Jonathan Bailey has reportedly entered negotiations to star opposite Ariana Grande and Cynthia Erivo in…
Movies 4 months ago