It’s that time of the season again in which the age-old argument once again arrives: is Die Hard a Christmas movie? Well we’re not only here to confirm that yes, it is, but it lives in a special subgenre of Christmas action movies, stories set on or around the December holiday and full to the brim of pulse-pounding thrills and set pieces. To celebrate the upcoming holiday, we’ve compiled a list of the ten best Christmas action movies and yes, Shane Black gets a good amount of love here! 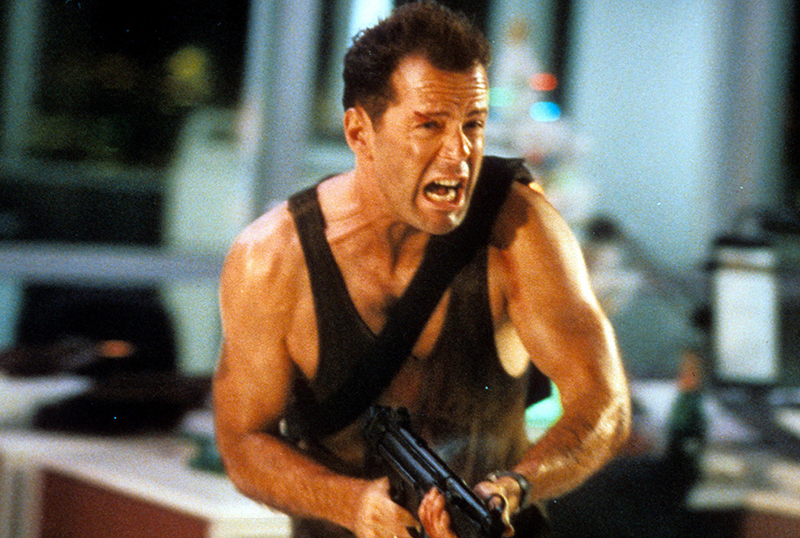 I mean, come on, it’s there in the featured image, it’s the catalyst for this list and it’s a f***ing masterpiece. People can argue all they want that given its focus on the action over everything else that it shouldn’t count as a Christmas film, but they should look at some of the key elements of the film and its story and see the truth. John McClane is at the Nakatomi Plaza building to try and reconcile with his wife Holly, but more than that, it’s Christmas Eve and Holly’s company is hosting a party to celebrate the holiday, which is subsequently broken up by Hans Gruber’s gang of thieves. From decorations strewn throughout some of the film’s locations to John dressing up a dead bad guy in a Santa hat and ending his threat to the rest of the gang with “Ho-Ho-Ho,” it’s kind of hard to argue against this film’s Christmas ties. 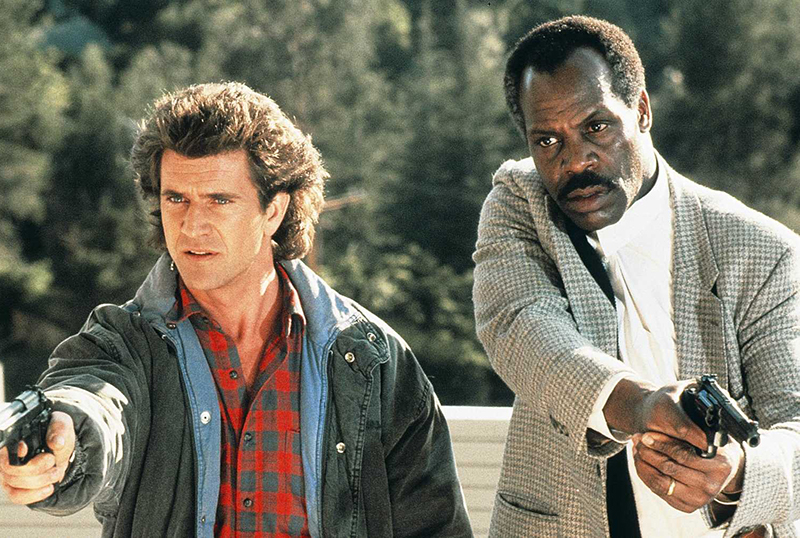 Click here to purchase the first installment in the Mel Gibson and Danny Glover-starring franchise!

With his 1987 feature scripting debut, Shane Black set a few precedents for what audiences should expect in all of his films, written or directed, in the years to come. First, there will be lots of pitch black comedy and banter between a seemingly mismatched duo; second, the action is going to be fast and exciting; and third, the story will most likely be set around Christmas, and Lethal Weapon may be one of the most festive of his filmography, and still one of his best. From holiday decorations on houses and businesses around the Los Angeles area to a shootout in a Christmas tree lot, it’s one that utilizes its time of the year appropriately and just subtle enough to not become tiresome. 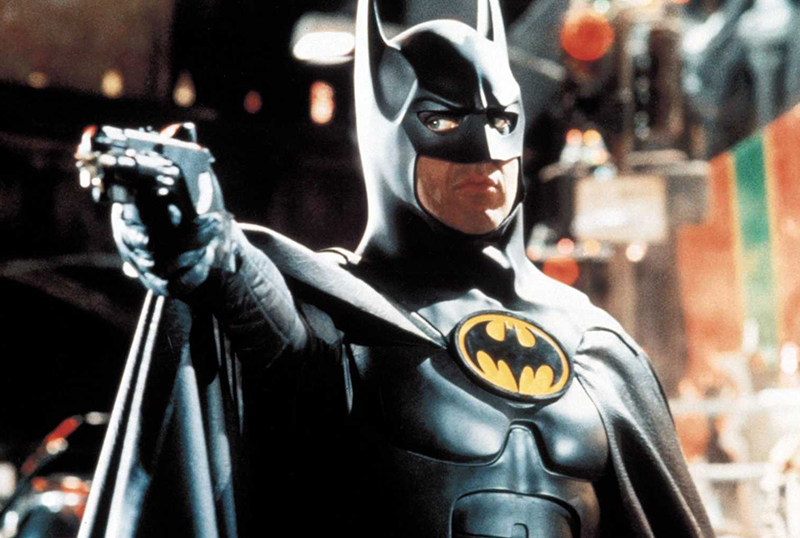 Despite his love for the macabre, Tim Burton is another director who has utilized the holiday season in multiple films and the most prevalent, and most exciting, comes in the form of the Michael Keaton-led sequel, Batman Returns. While Gotham certainly looked relatively cold in Burton and Keaton’s first outing, the arrival of snowy weather offered a more uniquely gothic and compelling look and made way for some exciting set pieces, most notably a parade in which Danny DeVito’s Penguin unleashes an army of penguins armed with bombs to destroy the city. 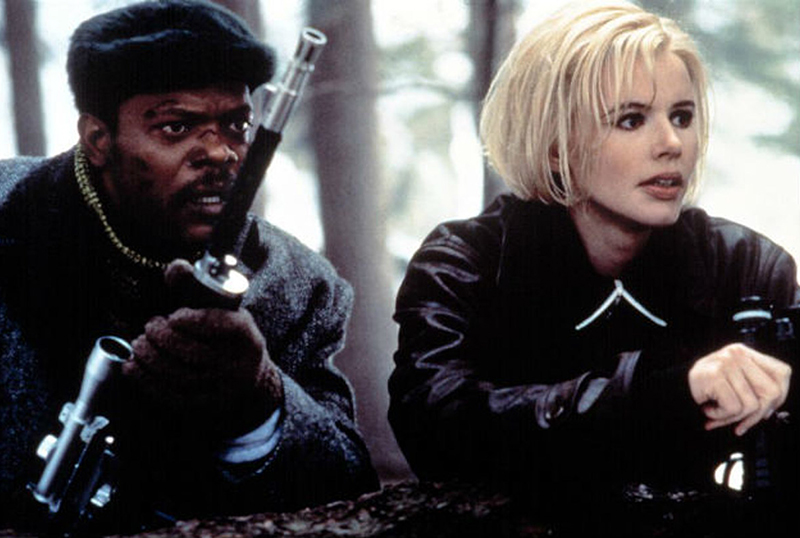 Well that didn’t take long, but we’re already back to the library of Shane Black to discuss his underrated cult classic The Long Kiss Goodnightstarring Geena Davis as an amnesiac schoolteacher with a past as an ass-kicking assassin. With both the past and present events of the story being set around Christmas, including another parade being used for a terrorist-level attack, and plenty of exciting action and killer performances from Davis and Samuel L. Jackson, it’s an underrated holiday gem. But don’t just take it from us, take it from Jackson himself. 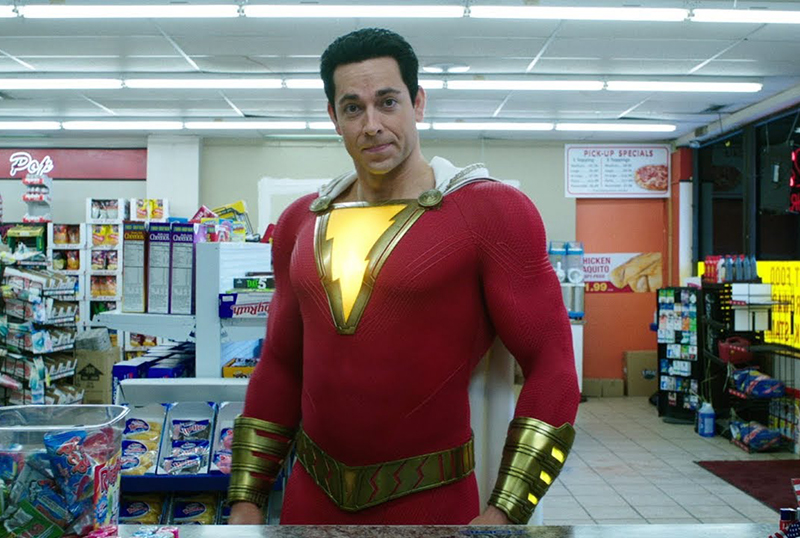 Following in the footsteps of Burton’s Batman sequel and Black’s Iron Man 3 — which just narrowly didn’t make the cut for this list, despite it being my favorite of the Robert Downey Jr.-led trilogy — David F. Sandberg’s first superhero outing not only re-introduced cinema goers to Shazam!, but it also saw its holiday setting used accordingly to tap into its central themes and messages and to deliver some exciting set pieces and gags, most notably the local winter carnival. 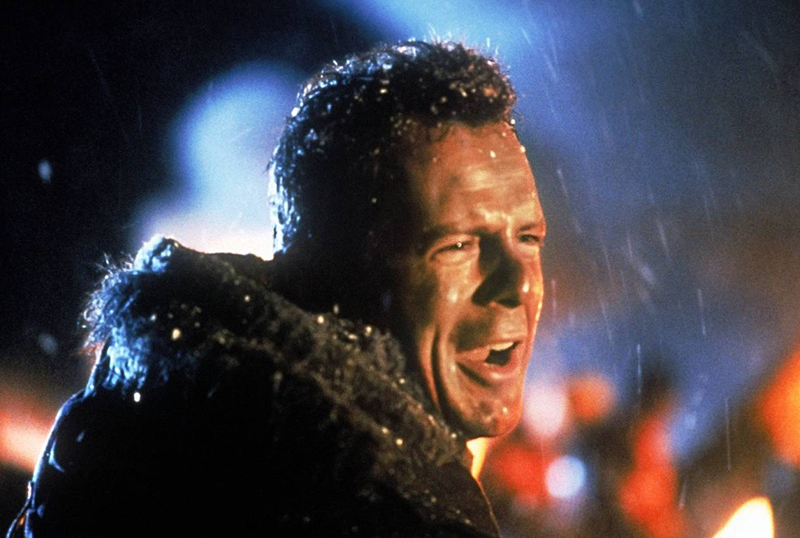 It may not be my favorite sequel of the Die Hard franchise, but there’s no denying that the 1990 follow-up Die Hard 2: Die Harder — yes, that was actually the subtitle — is a damn great action movie set around Christmas. Though on better ground with his wife than in the first movie, John once again finds himself in the wrong place at the wrong time on Christmas Eve while awaiting the arrival of Holly at the Washington Dulles International Airport, which has just had its air traffic control system hijacked by terrorists. Ramping up the holiday festivities with more dialogue and gags tied to it and loads more decorations, it may not have changed the game for the Die Hard franchise but it’s a damn entertaining Christmas action pic. 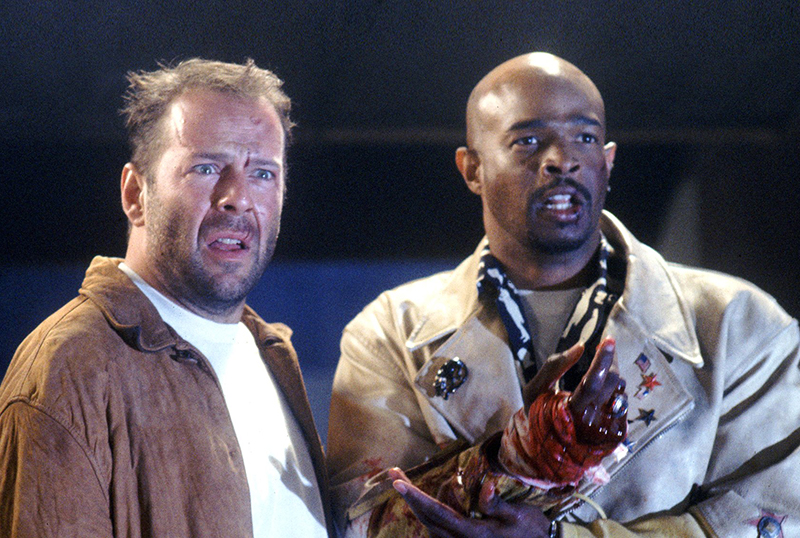 Click here to purchase the most underrated of Shane Black’s library!

Even more than The Long Kiss Goodnight that followed it, the Shane Black-penned buddy action comedy The Last Boy Scout didn’t initially get a lot of attention from critics or audiences at the time, but has since garnered a cult following and is, truly, his most underrated work. Centered on alcoholic P.I. Joe Hallenbeck as he teams with disgraced football star Jimmy Dix to solve the murder of the latter’s girlfriend and its ties to a sports gambling conspiracy, the film is technically the least Christmas-y of the bunch, but it does make a reference or two to the holiday, most notably with a drawing from Joe’s daughter showing a satanic Santa Claus, and with its exciting action and incredibly comedy, it’s a worthwhile watch in December — and every other month.

RELATED: POLL RESULTS: What 2020 Movie Are You Most Thankful For? 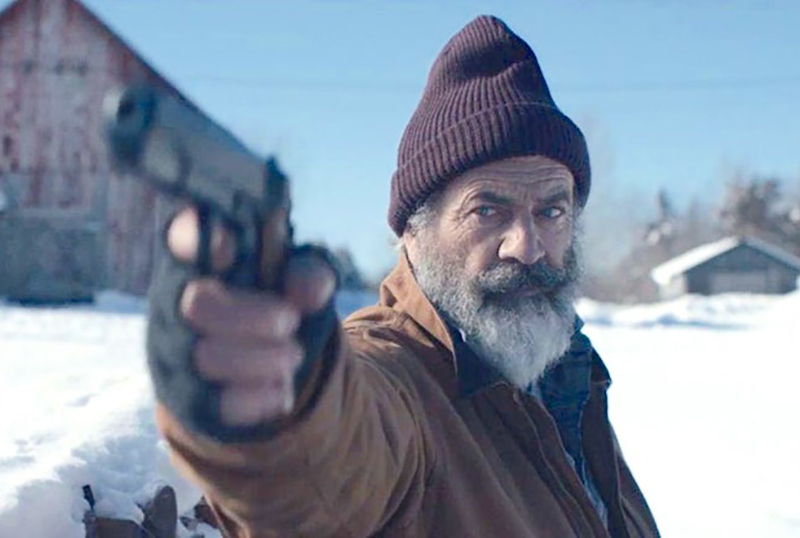 Click here to purchase the dark take on Santa Claus with Mel Gibson in the titular role!

We’ve seen everything from jolly Saint Nicks in Elf to borderline-depressing mall Santas in Bad Santa, but one of the most unique and exciting in recent years was Mel Gibson’s gun-toting Nick in the Nelms brothers’ Fatman. Though it may take some time getting to the Santa action it teases, there’s a solid amount of thrills from Walton Goggins’ Skinny Man and wonderfully offbeat humor to keep things interesting leading up to the wild and brutal final showdown between the two.

Enemy of the State 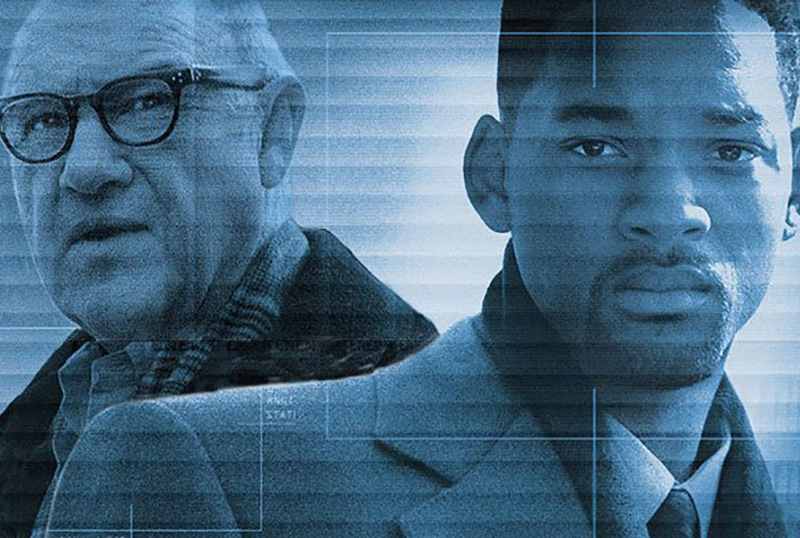 Click here to purchase the Will Smith and Gene Hackman-starring espionage thriller!

After briefly exploring the holiday season behind the camera in The Last Boy Scout, Tony Scott got another chance to get festive with his action in the Will Smith and Gene Hackman-led thriller Enemy of the State. Though not nearly as focused on the season as others on this list, it does prove to be a sort of catalyst for the story as Smith’s Bobby Dean is out lingerie shopping for his wife when he bumps into his college friend Daniel Zavitz, who happens to be on the run from corrupt government agents as he holds evidence of them conducting a murder. Leaving the evidence on an unknowing Dean, the plot takes off and thanks to some stylish direction from Scott, powerful performances from Smith and Hackman and plenty of compelling action, it’s a perfect action ride for the holiday season. 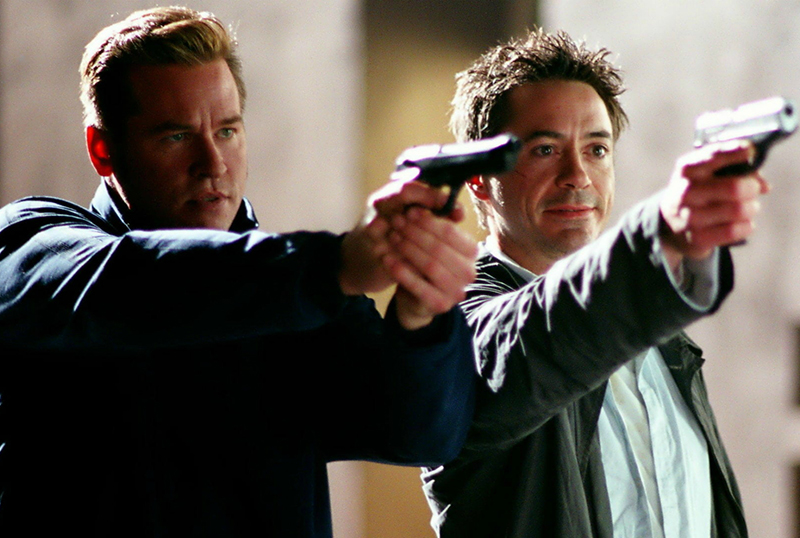 We may not have started this list with Shane Black, but we’re going to end it with his hilarious, intriguing and phenomenal directorial debut, Kiss Kiss Bang Bang. Starring Robert Downey Jr. as a New York thief who unintentionally wins a screen test and heads to Hollywood to train alongside a P.I. for his role, only to find themselves wrapped up in a hardboiled murder mystery. Starting with RDJ’s Harry robbing a toy store to find a certain item for his niece and continuing with multiple holiday parties and half-hearted wishes of “Merry Christmas, sorry I f***ed you over,” it’s not just a year-round delight, it’s a fantastic December watch and one of Black’s best to utilize the holiday season.

What’s your favorite Christmas-set action movie? Let us know in the comments below!

Last year, actor Ezra Miller was in the news seemingly all the time thanks to a variety of different controversies.…
Movies 30 mins ago

Best of 2022 is ComingSoon’s weeklong celebration of the entertainment that made this past year so memorable. Well, kids, 2022…
Movies 4 weeks ago

2022 was a good year for movies, as good as a year can be following a global pandemic. Fingers crossed,…
Movies 4 weeks ago