ComingSoon.net is debuting the exclusive Endlings Season 2 trailer ahead of the second season’s debut on Hulu on Friday, January 15, with 12 new action-packed episodes. You can check out the trailer now in the player below!

RELATED: Derek DelGaudio’s In & Of Itself Sets Hulu Premiere Date

Sometimes “the end” is just the beginning…! Set 20 years in the future, the live-action/CG series from Emmy-winning Sinking Ship Entertainment (Odd Squad, Ghostwriter) tells the empowering story of four teenagers in foster care together who discover they’re not alone in the universe, even though it can sometimes feel like they are. Together, the intrepid family is on a mission to save the “endlings” (the very last of an earthly – or intergalactic – species) and bring them back from the brink of extinction. The goal of foster care is to reunify children with their biological parents whenever possible, and this season will bring Tabby (Michela Luci; Dino Dana, Abby Hatcher: Fuzzly Catcher) back together with her mom – a moving moment rarely depicted in a kids’ show!

Picking up where Season 1 left off, the focus of Endlings Season 2 moves from saving elephants to polar bears and finds Tabby, Johnny (Edison Grant; Lockdown, Forget-Me-Not), Julia (Kamaia Fairburn; Star Falls, Holly Hobbie, Odd Squad), and Finn (Cale Thomas Ferrin; More Beautiful for Having Been Broken, Speechless) helping their extraterrestrial friend, Ling, as they get closer to saving the remaining fantastical endlings. When Ling accidentally shows Tabby a vision of their quest failing, the team learns Ling’s powers don’t just allow the alien access to their past, but also their future, kicking off a high-octane, time-bending adventure, where the teens must learn to let their hopes, not their hurts, shape the future. As they face their fears, they fight to change the future to save their lives and the planet.

To further the themes of the series and help make a difference beyond the screen, Endlings has partnered with several leading organizations, including the International Fund for Animal Welfare (IFAW) and FosterMore. In addition, Endlings is working with Lucky Fin and actor Cale Thomas Ferrin to end the stigma around limb differences.

The funny and heartfelt series showcases themes like empathy, inclusion, and the meaning of family as well as the importance of conservation and preservation. As the four kids discover the interconnectedness between themselves and the natural world, they learn being an “endling” doesn’t have to mean “the end.” It can also mean a new beginning. The new season of the groundbreaking show underscores for young viewers that they too can be agents of change and help make a meaningful impact on the world. 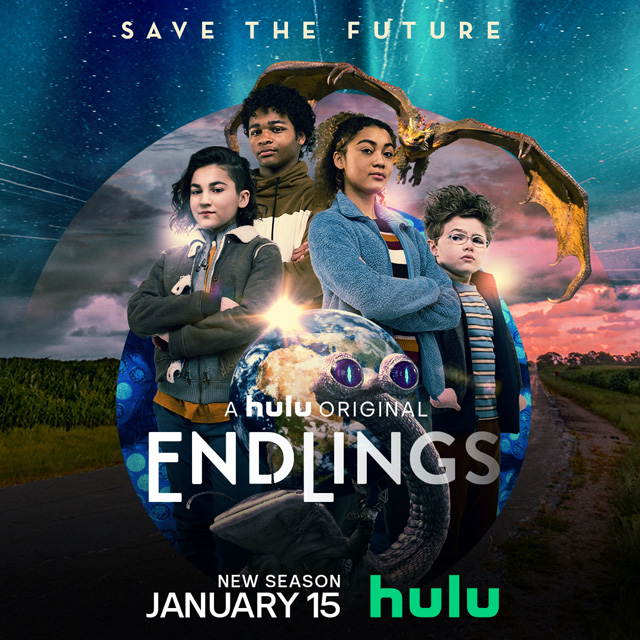 Following a similar decision from Adult Swim, Hulu and Squanch Games have cut ties with Rick and Morty co-creator Justin…
TV 2 days ago

How I Met Your Father Season 2 is among the most interesting things on the Hulu schedule for January 23-29.…
TV 5 days ago

How I Met Your Father Season 2 is finally hitting Hulu. In a matter of hours, Sophie and the rest of…
TV 5 days ago