House of the Dragon has recently wrapped up its freshman season and will soon hit the 4K and Blu-ray market.

On Sunday, House of the Dragon concluded its first run after airing “The Black Queen,” an exciting installment that ended with Rhaenyra Targaryen crowned as the queen of the Seven Kingdoms. The highly appreciated series will become available in 4K and Blu-ray starting December 20, right before Christmas. In addition to the ten episodes that aired on HBO and HBO Max, the release will include over an hour of bonus features plus two all-new, never-before-seen featurettes. Fans can choose between buying the 4K limited collectible steelbook edition at $59.99 or the standard edition at $54.97. The Blu-ray edition comes at $49.99, while the DVD at $44.98.

RELATED: Explained: What Happened in the House of the Dragon Season 1 Finale?

Take a look at the elegant House of the Dragon Season 1 steelbook here below. 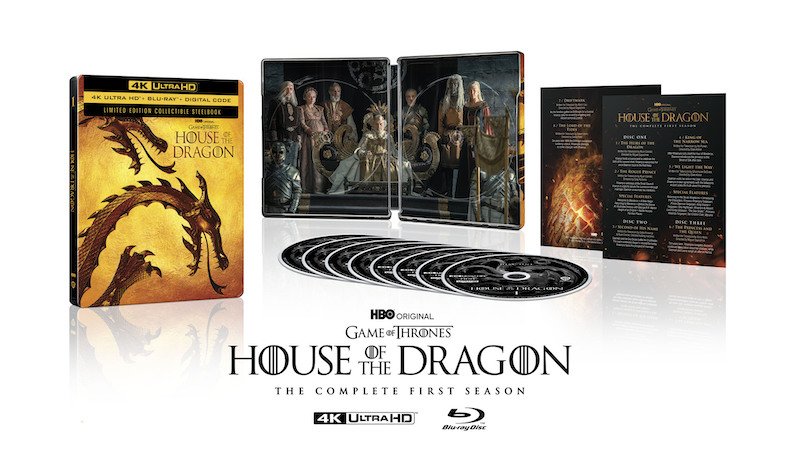 Based on George R.R. Martin’s Fire & Blood, House of the Dragon chronicles the rise and the downfall of the Targaryens, the only family of dragonlords to survive the Doom of Valyria. It takes place 200 years before the events of the award-winning series adaptation of Game of Thrones, which aired its final episode in 2019.

RELATED: George R. R. Martin: The Winds of Winter Ending Will Differ ‘A Lot’ From Game of Thrones

Game of Thrones HBO House of the Dragon TV News

Academy Award-nominated movie Babylon is finally coming to 4K, Blu-ray, and the digital market. Starting on January 31, the Damien…
Movies 1 day ago

A neo-noir anime classic is celebrating its 25th anniversary. With that, fans of Cowboy Bebop can now avail of a…
Anime 1 week ago

The intense and deadly battles between humans and gods are coming to Blu-ray. The home video release of Record of…
Anime 2 weeks ago