Cobra Kai Season 3 is arriving on Netflix a week early with the season now set to premiere globally on January 1, 2021! Additionally, the Cobra Kai cast will join hosts David Spade, Fortune Feimster, and London Hughes on The Netflix Afterparty to chat all things Season 3 on January 2, 2021, only on Netflix. You can check out the announcement video in the player below! 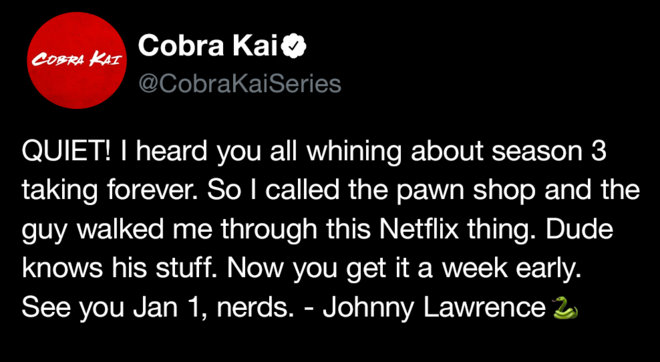 The upcoming season will see Daniel LaRusso returning to Japan in order to continue to navigate through life without the mentorship of his Karate Kid sensei, Mr. Miyagi. LaRusso fought in Japan during the events of 1986’s The Karate Kid Part II. With a new sensei at the helm of the Cobra Kai dojo, a three-way feud takes center stage. Old grudges — like Cobra Kai — never die.

Along with the announcement of the sixth and final season of the Netflix series Cobra Kai, executive producers Josh Heald,…
TV 2 weeks ago