The time has finally come for the arrival of the second season of Disney+’s hit Star Wars spin-off series The Mandalorian centered on the titular bounty hunter and his efforts to keep The Child safe, with the premiere episode, “The Marshall,” picking up from the pulse-pounding events of the season one finale.

Wherever I Go, He Goes

The episode opens with Mando and The Child arriving on an unknown planet during the night, with disturbing-eyed creatures lurking in the nearby darkness as the two casually move past them towards a building where a person stands outside as a bouncer. Mando asks to see Gor Koresh (John Leguizamo, John Wick), an underground crime lord currently attending a sort of fight club seeing two Gamorreans fighting one another using vibro blades. Mando asks for help finding other Mandalorians, being told Gor could help with the search, but after the bounty hunter proves unwilling to bet his Beskar armor on the fight at hand, Gor turns on Mando with his goons and threatens to kill him for the armor. Mando responds by utilizing his Whistling Birds to kill the goons surrounding him while defeating others in hand-to-hand combat and chasing a fleeing Gor down, hanging him from a nearby streetlight and learning of a Mandalorian located on Tatooine in the city of Mos Pelgo. As Mando turns to leave with The Child, he shoots out the light Gor is hanging from, leaving him to seemingly be devoured by the creatures lingering in the nearby dark.

Why Does Everyone Want to Go Back to Tatooine?

Mando returns to Mos Eisley to the hub station of Peli Motto (Amy Sedaris, BoJack Horseman) to have The Crest worked on while he searches for Mos Pelgo, an old mining settlement that was ravaged by bandits after the fall of the Empire. Mando takes Peli’s old speeder bike out there with The Child riding in a passenger carriage enjoying the fast breeze along the way, passing by Tusken Raiders during the night. Mando arrives in town in the morning where the streets are mostly deserted with only a few people looking out from their porches. 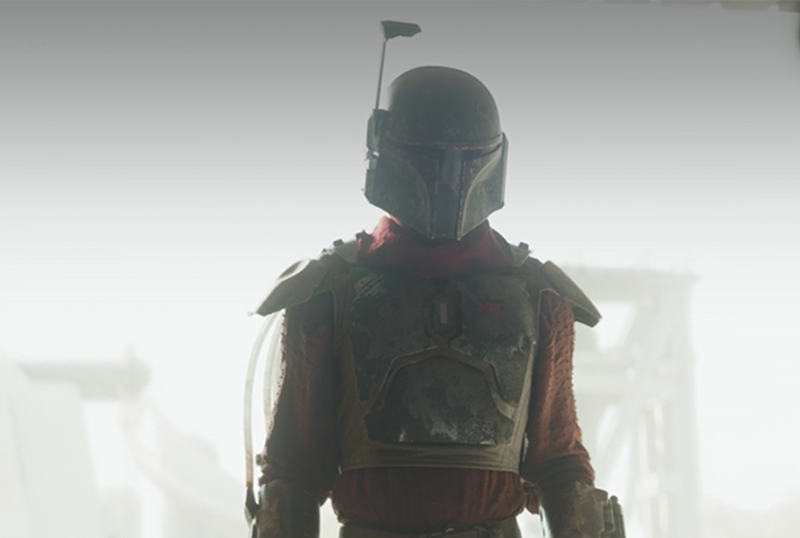 Mando heads into a local cantina and meets the bartender Weequath, asking him for the location of the other Mandalorian, though he reveals the only other person in town that looks like Mando is The Marshall, who arrives just as his name is mentioned wearing Beskar armor that looks like that of Boba Fett. The Marshall grabs a bottle of spotchka and two glasses from the bar and sits at a nearby table, removing his helmet that reveals a blaster hole in it and introduces himself as Cobb Vanth, who states he’s never met a real Mandalorian, only having heard stories and bought the armor off of some Jawas.

The Town of Perfection, Tatooine

Demanding he remove the armor, Vanth and Mando are about to have a gun duel in the cantina until they are interrupted by a large tremor in the ground and head outside, where people are frantically fleeing the streets and the local animal life are reacting in fear to the situation. Mando and Vanth watch as the sand in front of them seemingly turns into an ocean with something swimming underneath it and suddenly a nearby bantha is eaten whole by a krayt dragon, which Vanth says has been terrorizing the town for some time now. The two strike up a deal to hunt the dragon down together in exchange for Vanth turning over the armor to Mando.

A Little Bit of Backstory 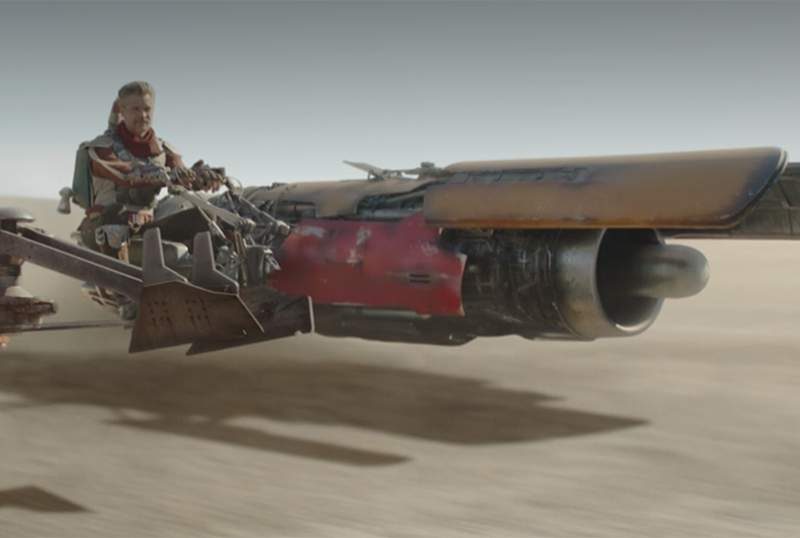 Vanth and Mando head off to the krayt dragon’s supposed living space in the desert with Mando on a speeder bike and Vanth on what appears to be one of the engines from Anakin Skywalker’s podracer from The Phantom Menace repurposed as a solo vehicle. Vanth discusses his and the town’s history, looking back at the destruction of both Death Stars and revealing that with the Empire pulling out of Tatooine, a local group known as The Mining Collective quickly moved in on the town and turned it into a slave camp overnight. Vanth escaped the attack with a camtono full of silicax crystals and wandered the desert for days until the arrival of a Jawa Sandcrawler, where he traded the crystals for what appears to be Boba Fett’s Beskar armor. Vanth then returned to the town and used his newfound armor and weapons to kill off all members of The Mining Collective and became Mos Pelgo’s guardian from attacks by any invading force.

RELATED: Jon Favreau Says The Mandalorian Season 3 is on Schedule To Film This Year

Mando and Vanth head into a canyon area where they are cornered by wolf-like creatures, though Mando speaks Tusken to them and calms them down before chatting with some local Tusken Raiders in a combination of Tusken and sign language, learning that the Raiders are also out to kill the krayt dragon and being invited back to their camp. While speaking with each other at the camp, Mando tries to establish a peace between the Raiders and Vanth, stating that if they fight amongst themselves the monster will kill everyone.

The krayt dragon is living in an abandoned sarlacc pit, with Mando saying the only things that can live in an abandoned sarlacc pit is something that eats one. A Tusken leaves a bantha out as bait for the krayt dragon, having studied its digestion cycle for ages and learning to feed the dragon to keep it asleep longer. The dragon, however, exits the pit and consumes the bait-laying Raider instead of the Bantha, leaving the group to determine a new plan. The new plan will see the Mos Pelgo townspeople used as both bait and fighters alongside Vanth, Mando and the Raiders to combat the krayt dragon and will leave the corpse and its ichor to the Raiders in exchange for them never raising a blaster to the town again. 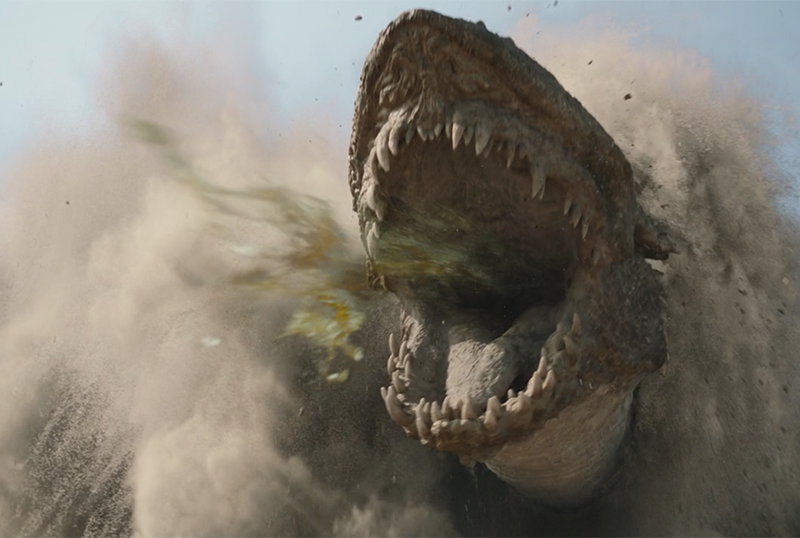 The group all return to the pit, where the krayt dragon is sleeping, and get to work on their plan. Mando explains the Tuskens studies have revealed that the belly is the weakest spot on the creature, therefore, the group will bury explosive charges used for mining at the opening of the cave then will wake it up and get it angry enough to charge at the group by using a large crossbow to hit the detonator and blow it to kingdom come. A trio of Tuskens call out to it and get it to charge from the pit with crossbows setup and used to keep it above ground, though are unsuccessful in holding it. With plenty of grenades and gunfire the group are able to lure it out just enough to seemingly kill it, but not before it spews acidic vomit that wipes out some Tuskens. However, this proves false and it reappears breaking through the peak of the mountain, spewing the venom down on the group below, with Mando and Vanth heading up to it to draw its attention while they formulate a new plan. Vanth uses the rocket launcher in the Beskar armor to draw its attention while Mando breaks his jetpack to catapult Vanth above the creature and allowing himself to be eaten by the dragon with a bantha carrying dozens of explosive charges and holding the detonator, blowing it up from the inside. 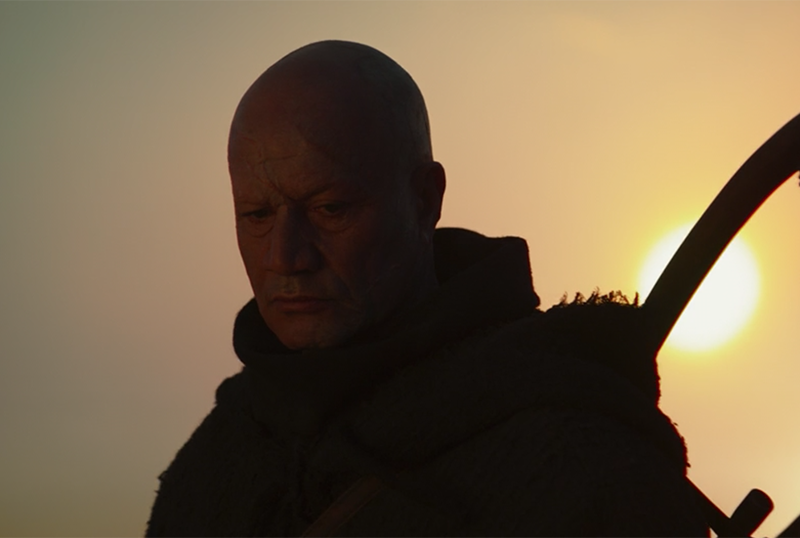 After retrieving the armor from Vanth, who makes a mention to ensure the Mandalorians know he didn’t break the jetpack of the suit, Mando takes off across the plains on his bike, watched by a cloaked figure from atop a mountain who turns around to reveal the face of actor Temuera Morrison, likely as Boba Fett.

A brand new TV spot for Lucasfilm’s highly-anticipated third season of The Mandalorian has been revealed. The video features some…
TV 7 days ago