Daredevil season 3 episode 1 picks up where The Defenders left off, with Matt Murdock and Elektra trapped beneath an exploding, crumbling building. Matt survives the destruction and is brought to Father Lantom. Rather than send Matt to a hospital where his identity as Daredevil would be discovered, he takes Matt to the nuns at the orphanage where Matt grew up after his father was murdered. Sister Maggie, in particular, sees to Matt’s recovery.

“Hands Should Be Used for God’s Work” 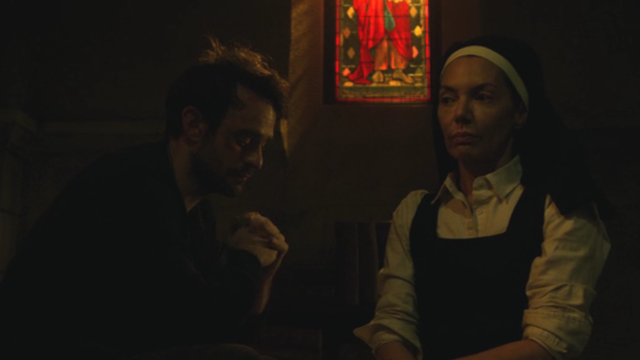 With Matt recovering physically, Sister Maggie wants him moved out of the orphanage. She and Father Lantom set Matt up in the laundry room beneath the church. Though he’s no longer in critical condition, Matt still suffers from his senses being fuzzy. He cannot hear out of his right ear. All he can taste and smell are blood and ashes. Matt stumbles around, feeling sorry for himself. Sister Maggie continues to bust Matt’s chops, telling Matt that his father got knocked down a lot as a boxer, but he never failed to get back up on his feet.

Matt finds a neti pot in the medicine cabinet and washes the blood out of his sinuses. Matt stops feeling sorry for himself long enough to realize that his sense of touch is as strong as ever. He begins to train in earnest, even participating in a sparring match in the laundry room, where Matt holds his own until he gets hit in the right ear again, which throws him off.

Sister Maggie is less concerned with Matt’s physical healing than she is with his spiritual health. Matt compares himself to Job. Matt believed himself to be God’s soldier as Daredevil, but after seeing those he cares about suffer and die, Matt has turned his back on God. Maggie places her cross around Matt’s neck and asks him to wear it for her, if not for himself.

That evening, Matt dresses back in his black suit and stops a beating. Once the father and daughter victims are safely away, Matt succumbs to the assailants. Believing he’ll never be the Daredevil he once was, Matt asks the assailants to kill him, but they run from the cops instead.

“I’m Not So Sure Daredevil Is the Problem” 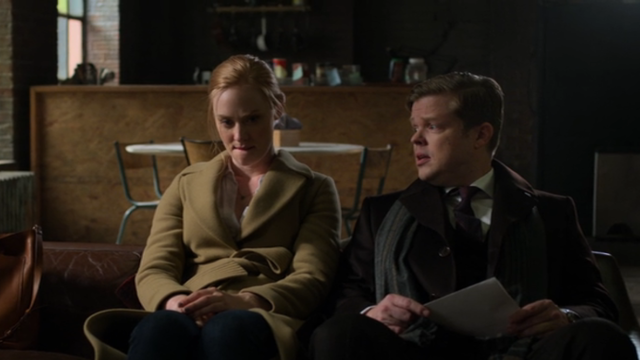 Karen has been keeping Matt’s apartment and paying his bills with the belief that someday Matt will return. She calls Foggy to help her legally stop Matt’s eviction, as she has fallen behind on some of the bills. Foggy agrees to help Karen by paying the bills 50-50 for one more month, but after that they have to let the apartment, and Matt, go.

“It’s a Nice Drive, Though” 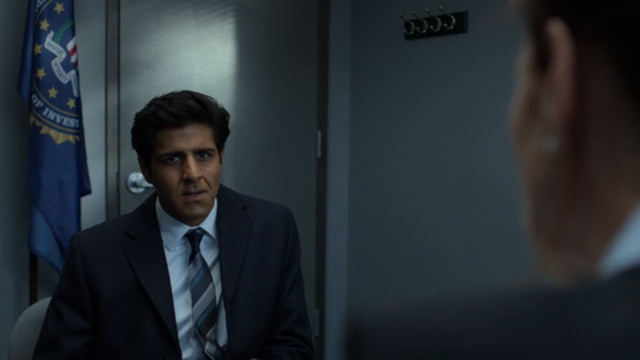 We are introduced to FBI agent Ray Nadeem. Ray’s family is broke after his sister-in-law battled cancer for three years, with Ray and his wife paying the bills when the insurance wouldn’t. Ray asks his boss at the FBI for a review and a pay raise, which is long overdue. He suspects that he keeps getting put off because he is Hindi. She tells him that his debts make him a recruitment opportunity and that the FBI will not promote him until he gets his finances in order. 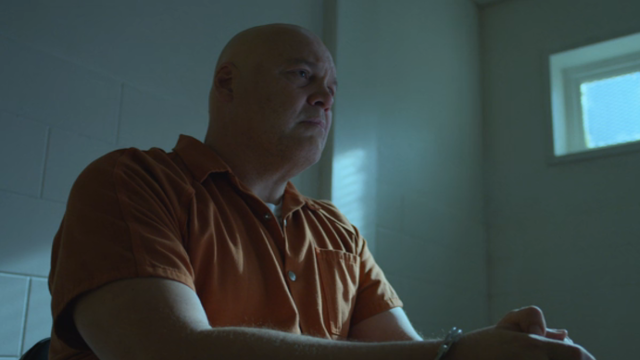 Wilson Fisk tries to create some semblance of a normal life for himself while in prison. His lawyers deliver Fisk both some good news–his appeal is moving forward–and some bad news. The FBI has labeled Vanessa an accessory to Fisk’s crimes. If she comes back to the US or is spotted overseas, she will be arrested and charged. Wanting to protect Vanessa from having to pay for his crimes, Fisk meets with Agent Nadeem and says he is willing to cooperate with the FBI in exchange for Vanessa’s protection.

What did you think of Daredevil season 3 episode 1? Let us know in the comments below!

Regardless if you view M. Night Shyamalan as a genius with a few poor outings or a lousy director with…
Movies 18 hours ago

Kit Harington has played coy about a potential Game of Thrones spin-off series about Jon Snow, and that continued during…
TV 21 hours ago

Actress Kiersey Clemons is set to star as Iris West in the upcoming DC film The Flash. During a recent…
Movies 3 hours ago

DC Studios Co-CEO James Gunn has been busy on Twitter, as the director has been debunking more Superman: Legacy rumors…
Movies 23 hours ago

The much-anticipated You Season 4 Part 1 is just a few days away from hitting Netflix. Joe Goldberg is back…
TV 1 day ago

Ahead of the highly-anticipated return of Bridgerton, series vet Phoebe Dynevor has officially confirmed that she will not be reprising…
TV 1 week ago

Watching The Last of Us TV show is a difficult task. I’ve played the game numerous times, watched others play the game,…
TV 1 week ago