The 10 Best Series on Netflix

In just a few short years, Netflix has become the dominant force in streaming programming. It’s also become one of the best places to binge-watch television series from several different eras. If you can’t find a TV show that you want to watch on Netflix, then you’re not trying hard enough.

Netflix has also been extremely aggressive about its push into original dramas, comedies, documentaries, and even feature films. The day may come when the Netflix originals outnumber the shows from other sources on the streaming service. But for the purposes of this list of best dramas on Netflix, we’re focusing on the TV shows that Netflix didn’t create. Next week, we’ll be concentrating on Netflix-created shows, so stay tuned!

Keep in mind, this list is only a subjective opinion. Your favorite series may not be the same, but we want to hear about the Netflix TV shows that you love in our comment section below!

Now, let’s go go over the best series on Netflix, in alphabetical order. 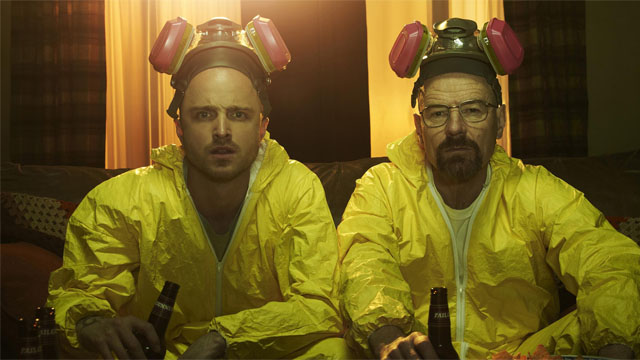 Unequivocally one of the great dramas of all time, “Breaking Bad” may owe some of its success and critical acclaim to Netflix. Series creator Vince Gilligan has credited Netflix on numerous occasions for helping to build the audience for “Breaking Bad.”

The fall of Bryan Cranston’s Walter White across 62 episodes of “Breaking Bad” is mesmerizing… and it’s a perfectly bingeable show. Charlie Booker’s “Black Mirror” was a British TV series that took off on Netflix and became so popular that Netflix is actually making it one of its original shows. But the original seasons of “Black Mirror” are still available Netflix and they are a uniquely dark experience.

Think of “Black Mirror” as the modern day “Twilight Zone,” except it holds nothing back and it can be quite disturbing. Especially that first episode. “Farscape” was widely overlooked when it was a Syfy original series 17 years ago, but Rockne S. O’Bannon and The Jim Henson Company crafted a sci-fi series that was the true successor to the original “Star Trek.” “Farscape’s” alien puppets were often inventive and far more convincing than any CGI characters. This show also had imagination to spare, but the heart of the series revolved around John Crichton, an astronaut from Earth trapped on the other side of the universe, as he tried to stay alive with a band of escaped prisoners. Crichton’s romance with Aeryn Sun was also one for the ages. Even FOX has admitted that Joss Whedon’s “Firefly” shouldn’t have been cancelled so quickly. But this sci-fi series continues to bring in new fans on Netflix, and it’s very easy to blow through all 14 episodes. Netflix has served Whedon well, as it is also the home to every episode of “Buffy the Vampire Slayer,” “Angel,” “Dollhouse,” the first two seasons of “Agents of S.H.I.E.L.D.,” and even a few episodes of “Roseanne.” Criminally under-appreciated when it was on FOX, “Fringe” was the modern day “X-Files” that created its own mythology and one of the most interesting depictions of an alternate Earth in recent memory. Anna Torv, Joshua Jackson, and John Noble had terrific chemistry as the core trio on this series, and they gave “Fringe” the heart that so many other shows lack.

“Fringe” was a truly special series, and it deserves to get the audience that it never had when it ran for five seasons. Idris Elba was already becoming a movie star when he returned to British television to star in “Luther” as John Luther, a police detective who is incredibly self-destructive. Luther could solve almost any case, but he couldn’t save his marriage. John Luther also had a particularly interesting relationship with a Alice Morgan, a killer who was even smarter than Luther.

Only the first three seasons of “Luther” are on Netflix, but the two-part finale should show up there eventually.

Another AMC original series that has found a good afterlife on Netflix. “Mad Men” is one of the rare period dramas to be widely accepted by fans and critics alike. Matthew Weiner’s creation followed the unique and compelling characters that worked at an ad agency.

Jon Hamm’s Don Draper was particularly memorable, and “Mad Man” took him on an unexpected journey of discovery through his personal highs and lows. And that’s just scratching the surface of what the show was really about. “Mad Men” earned its reputation as one of the best TV shows ever. “Doctor Who” may be off Netflix, but “Sherlock” remains! Steven Moffat and Mark Gatiss’ modernized version of Sherlock Holmes is mesmerizing and it helped make Benedict Cumberbatch and Martin Freeman into international stars. The show is so well made that the only problem is that there’s not enough of it! Only three TV movie length episodes are made each season, with several years between the seasons. If Netflix had been around in the ‘90s, then perhaps David Lynch and Mark Frost’s “Twin Peaks” wouldn’t have flamed out after two seasons on ABC. “Twin Peaks” was “Lost” before “Lost” and “The X-Files” before “The X-Files.” It was just relentlessly weird, and it quickly earned a dedicated fanbase that briefly swept the nation.

Twin Peaks is coming back to Showtime next year, so there’s still plenty of time to learn about Agent Cooper, BOB, and the Black Lodge. It’s trippy, but well worth the time. Rod Serling was just an unmatched genius. There have been attempts to remake and recapture the magic of the original version of “The Twilight Zone,” but the first series still ranks among the very best that television has to offer. Serling and several widely known sci-fi writers used “The Twilight Zone’s” science fiction anthology format to explore morality tales with twist endings that are still famous almost 60 years later. A true classic never gets old, even in “The Twilight Zone.”

What do you think are the best series on Netflix to binge watch right now? Let us know in the comments below!

Evangeline Lilly has been a mainstay in the Marvel Cinematic Universe, but now, she thinks it’s time for The Wasp…
Movies 28 mins ago

The much-anticipated You Season 4 Part 1 is just a few days away from hitting Netflix. Joe Goldberg is back…
TV 2 days ago