What would the OG “Cap” Do?

Episode 4 of The Falcon and the Winter Soldier, “The Whole World is Watching,” ends in desecration. Following the abrupt death of his brother in arms, Lemar Hoskins/Battlestar (Clé Bennett), an enraged John Walker (Wyatt Russell) chases down one of Karli Morgenthau’s Flag Smashers, Nico (the one who mentioned idolizing Captain America back in the day), and beats him to death. Surrounded by people recording on their phones, the last shot sees John holding a once-mighty, now-bloody shield—an image we wouldn’t dare associate with Steve Rogers (Chris Evans) or even Disney. #NotOurCap went on to trend in the Marvel Cinematic Universe. In episode 5, “Truth,” John is stripped of his star-spangled title for using Steve’s shield as a murder weapon—a defining moment that highlights the differences between our two Captain Americas and their approach to those who threaten their friends and philosophies. The mid-credits scene in “Truth” shows John making a cosplay shield as he gears up to murder Karli and, presumably, a whole lot of Flag Smashers.

Ironically, John’s murder of a defenseless foe mirrors the end of Steve and Tony Stark’s fight in Captain America: Civil War. In that film, Steve refuses to sign the Sokovia Accords, a piece of legislation that would put the government in control of the Avengers. This, along with Baron Zemo’s framing of Bucky Barnes and the revelation that Bucky (as the Winter Soldier) killed Tony’s parents, leads to that heartbreaking showdown with Iron Man. Tony is ultimately rendered defenseless as Captain America raises his shield and crushes his chest. Unfortunately for Nico, Cap 2.0’s aim isn’t an arc reactor. 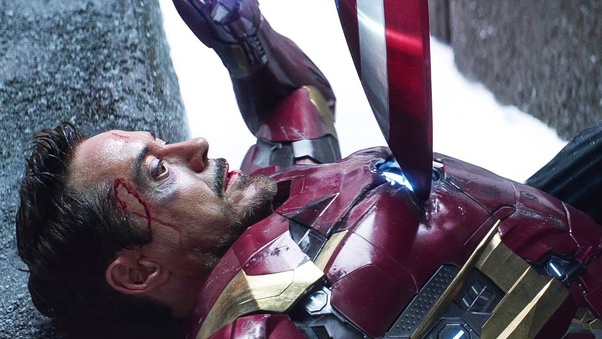 In Civil War, Tony’s last words to Steve are, “you don’t deserve it! My father made that shield!” Steve casts the shield aside because, for him, it’s not about the mantel. Unlike John, Steve is willing to question both himself and his country. It’s safe to say that if Tony were around in The Falcon and the Winter Soldier (whelp), devoid of anger, he’d have said the same thing to John. The show itself is set around the battle for the shield and is consumed by Steve’s absence; his looming legacy motivating Sam Wilson/The Falcon (Anthony Mackie) to give up the shield, the anointment of Walker as the new Captain America, and the Flag Smashers’ desire to debunk nationalist propaganda like “Captain America”—which they succeeded in doing without ever actually killing John. All of this begs the question: if Steve was still active as Captain America, how would he handle the Flag Smashers and their particular agenda?

In episode 4 of The Falcon and the Winter Soldier, Sam talks about life during the Blip, empathizing with the Flag Smashers’ plight:

For five years, people have been welcomed into countries that have kept them out using barbwire. There were houses and jobs. Folks were happy to have people around to help them rebuild. It wasn’t just one community coming together. It was the entire world coming together. And then, boom. Just like that, it goes right back to the way it used to be. To them, at least Karli’s doin’ something.

The Falcon and the Winter Soldier’s Global Repatriation Committee (GRC) seeks to “restore traditional border regulations and fast-track the return to normalcy.” Their solution: legislation known as The Patch Act and a new “hero.” In this way, The Falcon and the Winter Soldier is very much an inverse continuation of Civil War; instead of the Sokovia Accords and a disapproving Cap, you have The Patch Act and a gung-ho one. Where Steve was about freedom and fighting as a last resort, John thinks people should fall in line, representing order and an oppressive police state.

Comic-book John Walker was conceived in 1986 as Steve’s polar opposite, representing everything wrong with patriotism. A byproduct of nationalism and its precarious moral compass. In the series, John begins his tenure as Captain America the same way Steve did as propaganda. Instead of punching Hitler, he’s doing interviews with Good Morning America reassuring the country of its security and superiority. As we head into The Falcon and the Winter Soldier’s finale, John will likely take on the moniker of “US Agent,” a less-heroic (and much angrier) version of Captain America. This naturally leads into Zemo’s supremacy argument regarding super soldiers – power that has corrupted pretty much everyone besides Steve. Acknowledging this, even John (despite feeling entitled at times) questions whether or not he should take the Super Soldier Serum. Ultimately he does so because he’s desperate to live up to expectations and save lives. Inevitably, the serum makes bad worse…dramatically. When asked by Zemo whether he would ever take the serum, Sam flat-out says no.

In Captain America: The First Avenger, Steve doesn’t necessarily want to be a super-soldier. Wanting to do his part and motivated by his physical limitations, he becomes a science project for the same reason George Washington became president: someone had to. Like George (who could’ve been king), Steve was never one to dismiss other people’s opinions. Our star-spangled man was an ethical god (Steve, not George), worthy of Mjolnir. However, as Karli puts it, Steve and his shield are symbols of a “bygone era.” With The Falcon and the Winter Soldier, Marvel Studios is dissecting idealism, reframing Captain America’s legacy by introducing characters like Isaiah Bradley—heroes/leaders who were cast aside in twisted fidelity to an archetype. The contemporary answer to Steve is Sam, even if he couldn’t possibly understand what it would feel like for a Black man to be handed the shield. 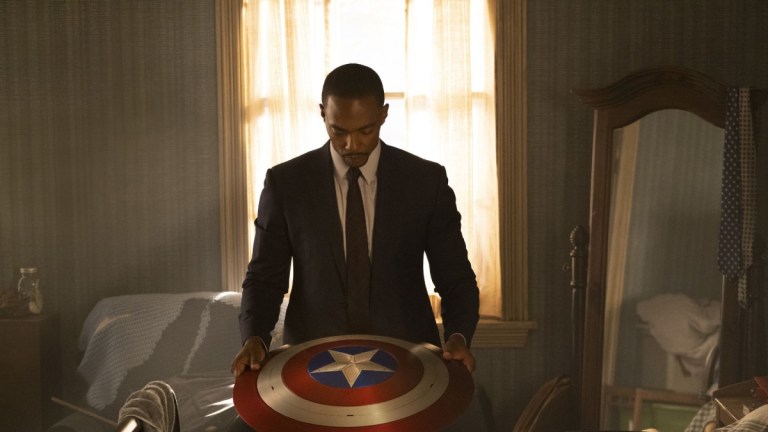 Steve’s answer to a new, divided world (full of Flag Smashers) is Sam.

Sam tries to talk to Karli and appeals to her humanity, saying the world “[isn’t] a better place if you’re killing people. It’s just different.” It’s not hard to imagine Steve saying the same thing. Steve may have even talked to her about the serum, relating to how it has changed her and amplified everything that makes a person themselves. In John’s position, he would’ve let Sam handle it. In fact, that’s exactly what he’s doing.

At the end of Avengers: Endgame, an elderly Steve passes the shield to Sam, who tries it on. Steve then asks, “how does it feel?” To which Sam replies, “like it belongs to someone else.” Sam recalls this moment in The Falcon and the Winter Soldier’s pilot, citing it as the reason he donated the shield to the Smithsonian because there has never been and will never be another Steve Rogers. The funny thing is, if their positions were reversed, Steve would’ve also considered himself unworthy of the shield. That’s why it belongs to Sam. 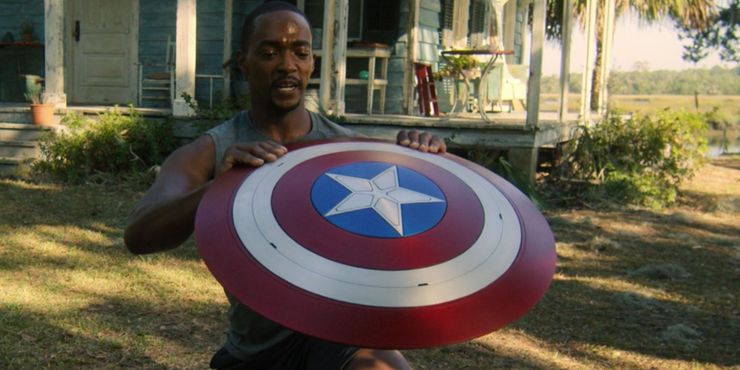 Steve’s way of handling all future threats was to anoint Sam. As Sam puts it in the penultimate episode, “Steve is gone. And this might be a surprise, but it doesn’t matter what Steve thought.” Therefore, in a sense, he’s already handled the Flag Smashers. Whether he’s on the moon, another timeline, or just hiding out sipping whiskey, OG Cap is gone. We’re dealing with a new-school MCU, one that enjoys blood-drenched shields and moral ambiguity.

The Falcon and the Winter Soldier will conclude its riveting take on an eerie political climate by having Sam fly in with Vibranium wings and a once-bloody shield. He’ll defuse the situation with the Flag Smashers and likely address the world in a similar fashion to Steve in The Winter Soldier, disapproving of The Patch Act and promoting not the old way or a different world, but a better one.

“A friend of mine once said, ‘the price of freedom is high’…it always will be.”