The Walking Dead: World Beyond Episode 2 Recap: The Blaze of Gory

In the second episode of The Walking Dead: World Beyond, the group adjusts to the reality of life beyond their community’s walls. Iris attempts to take charge, in spite of Hope’s reservations, while Felix and Huck trail the teens and Felix is forced to confront unwanted memories. 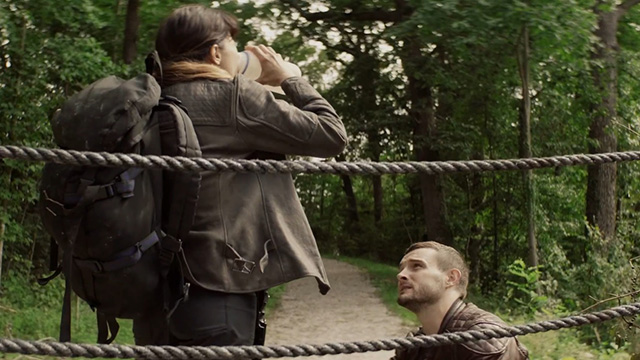 After Hope experiences a couple of flashbacks involving her and Iris’ mother, the episode picks up where the kids left off as Iris attempts to take down her first empty. She tries to remember Felix’s lessons on how to kill one of the undead, but things don’t go smoothly. After a fall leaves the walker incapacitated, Iris goes to finish it off but throws up instead, unable to.

The four of them continue on their journey as Felix and Huck work to catch up to the kids, talking about the messages Hope and Iris’ father Leo has been sending and the mysterious but efficient Civic Republic. Felix flashes back to a painful time before the apocalypse when he was a teenager and his father kicked him out of the house for being gay. Elsewhere, the kids take a break and Iris gets to know Silas more as Hope speaks to Elton, who is taking photos of a dead empty, fascinated by their physiology. He brings up his mother and mentions how he believes they are in an extinction-event, theorizing they have about 15 years until the human race is wiped out completely, something he’s accepted.

The group spots thick smoke in the distance, and they explain to Silas that it’s the Blaze of Gory, or B.O.G., that people have been talking about since everything fell apart. Elton explains the predominant theory is that it’s a lot of tires that are ablaze, which can burn for years. The smoke plume and firelight after night falls draw in empties and has been attracting the undead there for years. The more that gather, the louder it gets, attracting even more. Iris believes they can get through it, but Hope wants to go around. Iris argues they’ll save 60 miles if they go straight through, and says they should at least see if it’s doable. 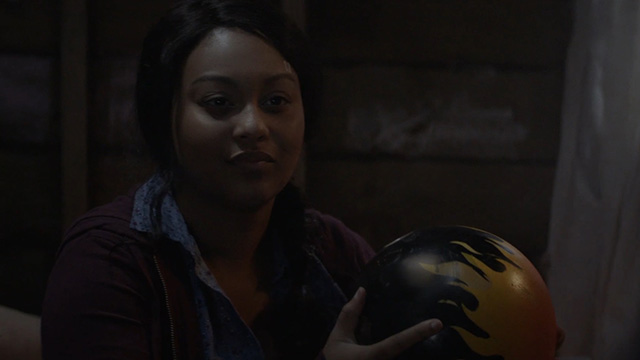 Felix and Huck come across Iris’ empty that the kids left behind, knowing they’re on the right trail. Felix blames Hope for this crazy plan, having a hard time believing it was Iris’ idea but Huck isn’t so sure. Felix briefly flashes back to the night everything went to hell, remembering that he was alone and trying to call his parents while running through the chaotic streets as explosions go off in the distance, but his phone was unable to connect.

Elton pulls out a can of spray paint, telling the others that he wants to continue Dr. Bavolar’s migration experiments while on their journey to track how the empties move or break off from each other, saying Silas could help. Suddenly, Elton comes face-to-face with an empty who has bees spilling out of its mouth. Elton sprays the empty in the face and falls to the ground. Silas runs up but freezes, unable to kill the empty and choosing to pick Elton up off the ground instead so they can make a run for it. Later, the four come across a nearby treehouse they can sleep in for the night, and bond over rolling around the bowling ball Hope found and named Big Mo. The noise attracts the attention of the empty Elton spray-painted, who growls at them from below. Hope tries to drop Big Mo on the empty but only manages to take part of its face off. They decide to worry about it in the morning and play Monopoly after Elton finds the game in the treehouse.

When everyone else is asleep, Hope decides to get rid of the empty herself. Silas wakes up when Hope comes back and thanks her, still feeling guilty that he should have killed it when he had the chance. Hope asks him to keep this their secret, not wanting Iris or Elton to know she dealt with the empty. Meanwhile, as Felix and Huck continue searching for the kids, Felix is stuck remembering the night everything changed. 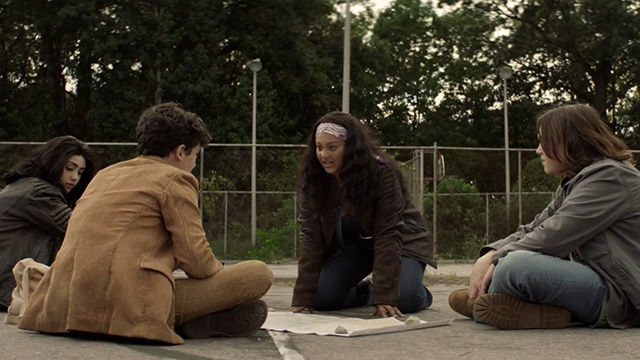 The next day, the kids get close enough to see that there are a bunch of empties surrounding the B.O.G. Iris thinks they can use an airfield to get through, and Elton says the key isn’t fighting, it’s avoiding, explaining they can use the lot of broken-down buses for cover but Hope disagrees. Silas says if they go around, they’ll probably get caught, voting to go through the B.O.G. along with Elton and Iris, making the decision for Hope. Elsewhere, Huck forces Felix to make camp for the night and get some rest because he’s been going nonstop and wearing himself out.

After finding shelter, Felix tells Huck he was at the University the Night the Sky Fell and when things got bad, he tried to get back to his family, wanting to see if they were okay and if he could be with them at the end. It took him two days to reach them mostly on foot. When Huck asks if he reached them, Felix says the past is the past, but in his mind he flashes back to when he finally reached his parents’ house and we learn his dad refused to let him in saying they didn’t need his help, leaving Felix by himself on the porch and in tears.

Elsewhere, Hope and Elton talk about the end of the world. Hope calls them the last generation, but Elton says they’re “the endlings,” as the last of a species is called, which makes them special and he feels lucky to know that, that he needs to make his life count and that it’s all he, or anyone, can do. Elton then corrects himself and says that the very last of a species is the endling, and in their faux species consisting of the four of them, the last one of them to live will be the endling of their little group, and it’s their life or death that “defines us all.” 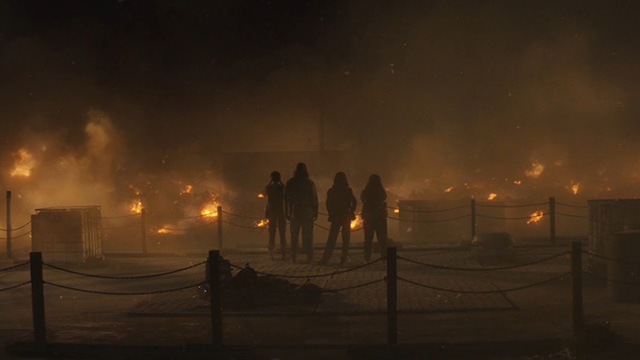 Before the kids take off, Elton and Hope spray paint a nearby tennis court sign “WE WERE HERE – THE ENDLINGS” and Felix sneaks out in the middle of the night while Huck sleeps. We find out later Felix went to his parents’ house to kill their reanimated corpses, but the door was locked and he didn’t go inside. In the morning, Felix is back and waits for Huck to wake up so they can get back on the road. Elsewhere, the kids make their way through the B.O.G., walking through the smoke using the buses to avoid the empties. Iris knows they need to keep moving east, but then the sun disappears from view through the thick smoke.

After a close call, Iris thinks they’ve made it through but they then come across the rest of the blaze with more tires burning and more empties in the way. Elton suggests that one of them set off an old tornado siren on a nearby roof to create a diversion. Iris rejects the idea of using someone as bait and begins to wonder if she made the wrong choice coming up with this entire plan. Hope tells her sister she should be proud, though, and suggests they all sleep for the night before continuing. As everyone else rests, Hope makes her way alone through the B.O.G.

AMC has dropped the promo trailer for the upcoming seventh season finale of Fear the Walking Dead titled “Gone,” which…
TV 8 months ago

What did you think of the first few episodes?
TV 9 months ago

Fear the Walking Dead Season 7B Trailer: Building a Better World Has a Price