In the sixth episode of TNT’s Snowpiercer, Layton lays tracks for revolution while Melanie faces an engineering emergency that threatens every soul on Snowpiercer. 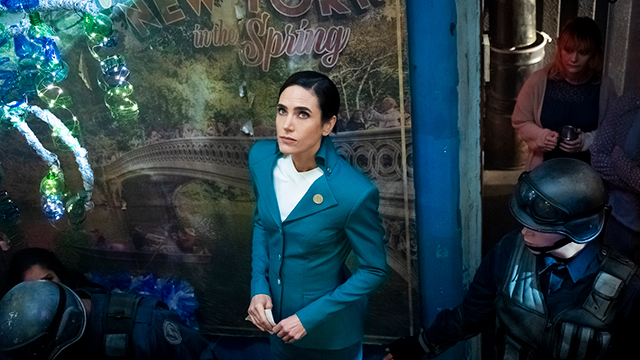 Osweiller takes over narrating duties in this episode, talking about life before the freeze but how he may prefer this life better as he had a rough history before becoming a Brakeman on Snowpiercer. Along the train, papers are being passed for a Tools Down protest in honor of Nikki, demanding justice for the murdered and falsely accused Third Class member.

In her quarters, Melanie is led through meditation by Jinju, but Melanie can’t focus because of Third’s strike. It’s a huge problem, as Third “can cripple every system on the train.” Melanie promises to crush it and then asks about Till. Jinju says that Till never showed up. Meanwhile, Till finally finds Osweiller and tries to apologize for knocking him out in order to help Layton and Josie, but he pushes that aside, saying they have work to do regarding the strike.

Layton is still struggling with the effects of being put in the drawers. He asks Zarah if she’s going to turn him in, and she says no. Meanwhile, Melanie, escorted by Commander Grey’s unit, addresses Third about the planned work stoppage. Melanie says Mr. Wilford wants to remind them that their “labor is sacred” and as “non-paying passengers” their labor is their ticket aboard Snowpiercer. She warns if the strike happens, Wilford will seize 10 striking workers randomly and will send them to the Tail and 10 Tailies would take their place. 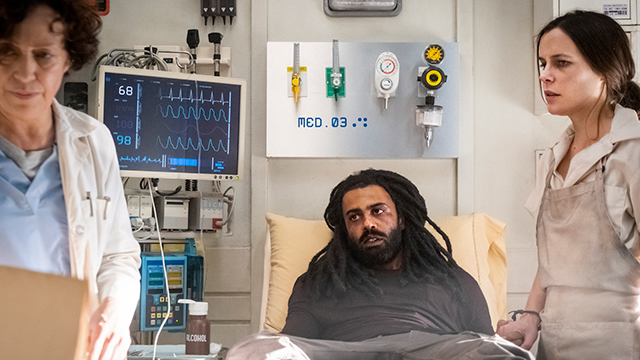 Josie returns to help rescue Layton before it’s discovered he’s no longer in the drawers. Zarah asks if she’ll see Layton again, but Josie says that there won’t be any more contact and it’s for Zarah’s own good. As they stumble through Third, Layton tells Josie the truth about Melanie being in charge and Wilford not being on the train, how she uses him as an illusion to maintain control. He tells Josie they can’t tell anyone else until they can figure out how to use this information.

Josie gets Layton to Dr. Pelton, who has agreed to help. Pelton says it could be days before his head clears but that he has little tissue damage. Pelton doesn’t know much about what’s being done to the people in the drawers but reveals there are 12 carts holding hundreds of people in suspended-animation for mass incarceration, experiments, extrajudicial imprisonment, all in Second Class.

Osweiller decides to use Till’s actions as a way to blackmail her into getting anything he wants. The two Brakeman begin questioning citizens and Osweiller becomes violent with one of the passengers, Till powerless to stop him. In the Tail, after the loss of one of their own, grief and tensions are rising. Meanwhile, Melanie meets up with Ben to discuss an electrical short that has caused the brakes to seize. Melanie says they’ll need the Breach team to swap the motor out.

Enemies of the State 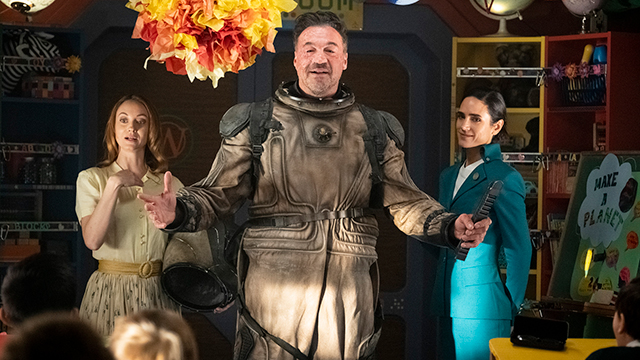 Breachman Boscovic is giving a presentation about Breach workers to the students before Melanie comes to collect him — but not before checking up on young Miles, who is excelling in his schoolwork and exercises. In Third, Zarah warns Miss Audrey that if she goes forward with the strike, she could end up in the Tail. Audrey says that they are fighters and they protect the things they love. Zarah reveals that she’s pregnant.

Dr. Pelton reveals to Layton and Josie that everyone onboard has a file, and that roughly every 1 in 10 passengers has an X marked in their file, blacklisting them as enemies of the state. Layton and Josie are both on that list, and as of two weeks ago, so is Dr. Pelton. Layton, still overly aggressive and not in his right mind due to the drawers and the chemicals they pumped him with, takes off with Josie’s chip and a scalpel to track down Melanie and kill her. Elsewhere, Ruth begins to complain about Wilford to Melanie, but Melanie quickly shuts her down.

Layton finds Melanie at the engine and grabs her, telling her he knows about the files and the carts of drawers and how he wants her to know it was a Tailie that killed her. Nearby, the Breachman attempt to address the brakes but there’s an explosion that sends everyone on the train flying as Snowpiercer struggles to stay on track as the locomotive rocks back and forth. Once they get back their footing, Melanie tells Layton that the drawers are not meant to be a prison, but a lifeboat. She anticipates that at any moment they could face an extinction event, and the best hope for the survival of humanity is to keep 400 people in suspension to ride out the freeze that were specifically selected for diversity, health, and skills to give them a fighting chance. She begs Layton to let her fix the train, and Layton drops the scalpel, letting her go. 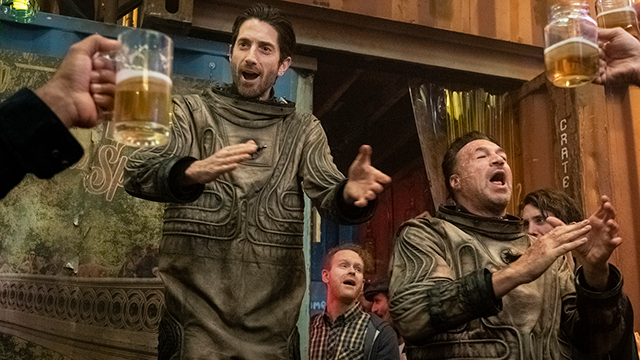 Melanie, Ben, and the Brakeman work to save the train, which will derail soon if they can’t get it fixed. Melanie tells Ben that since she designed her, she’ll fix her. As they brace for whatever comes next, Till tells Osweiller she won’t stand for his blackmail and his behavior. The two begin to slightly reform their bond due to facing their possible deaths together. Ruth races to the intercom to try and reassure the passengers, reminding them that if they derail, they need to brace in place and to try and remain calm.

The passengers prepare for death as Melanie fights to prevent the derailment. Layton rushes back to Josie and Dr. Pelton, telling Josie he didn’t kill Melanie and all he could think was that he wanted to see Josie and be with her. Right before the trail can derail, Melanie manages to reconnect the hydraulics, saving everyone. Osweiller backs off Till, essentially saying he won’t tell on her about Layton and encourages her to go find Jinju. The two share an emotional reunion and Till apologizes for not being there sooner.

Ben and Breachman Boscovic are met with applause by the passengers who are unaware that Melanie is the one who saved the train (which she prefers). Ben gives a speech that results in the crowd chanting Wilford’s name. When Melanie tells Audrey that Third seems to have had a change of heart, Audrey replies that the celebration will end but their grievances won’t, and next time Wilford won’t have a disaster to save him. Melanie tells Audrey to read the room. “We’re alive.”

Later, Dr. Pelton gives Josie and Layton her room, saying she’ll bunk with someone else. After she leaves, the two make love. In the hospitality office, Melanie has Miles brought in so that she can give him a caliper. She says that every engineer needs one and that Mr. Wilford gave it to her, but she wants Miles to have it. She then says that there’s something Wilford needs from Miles.

What did you think of the sixth episode of Snowpiercer? Let us know in the comment section below!

After previously announcing that Snowpiercer would be ending its run with the upcoming fourth season, TNT has officially cut ties…
TV 3 weeks ago

Dabi shares a shocking revelation about his family background. Meanwhile, Best Jeanist arrives to help the heroes. Here are the…
Anime 2 months ago

The fight against Shigaraki continues. Meanwhile, Toga targets Ochaco. Here is the information for My Hero Academia Season 6 Episode…
Anime 2 months ago

Dabi is ready to kill Hawks. Elsewhere, Endeavor and the others finally catch up to Mirko. Here are the details…
Anime 3 months ago