Despite what the movie’s title advises, audiences had every reason to worry about Don’t Worry Darling. This movie faced a never-ending onslaught of controversies surrounding a fired lead actor, on-set conflicts between the director and star, and a piece of spit allegedly sent in Chris Pine’s direction. Of course, with a story like that, a movie about the making of this film would be much better than what we got. However, putting aside the never-ending headlines surrounding this psychological thriller, the final product is a decently enjoyable ride that offers enough of the genre thrills to be watchable while not doing much more.

Director Olivia Wilde pulls us back into the 1950s with vibrancy and deliberate color choices that feel like a product of their time. This is an upper-class society where women are stay-at-home wives who send their successful husbands off to work with a kiss while they cook, clean, and attend dance practice. They learn about beauty in symmetry and they move as one. With this concept, Wilde and writer Katie Silberman craft a fascinating world that feels slightly off-kilter.

There are many themes in this film surrounding feminism, though Don’t Worry Darling doesn’t exactly beat you over the head with it. Still, it’s pretty clear what Wilde and Silberman wanted to say about how women are expected to stay within the safety of the men who provide for them rather than question authority. The movie has real-world parallels surrounding women being silenced as men gaslight them while also using a character portrayed by Gemma Chan as a symbol of the women who stand idly by and allow men to get away with this behavior. They’re all interesting concepts to explore in a horror film. Just as Jordan Peele uses horror to depict racial issues in Get Out, Wilde attempts the same with gender issues. 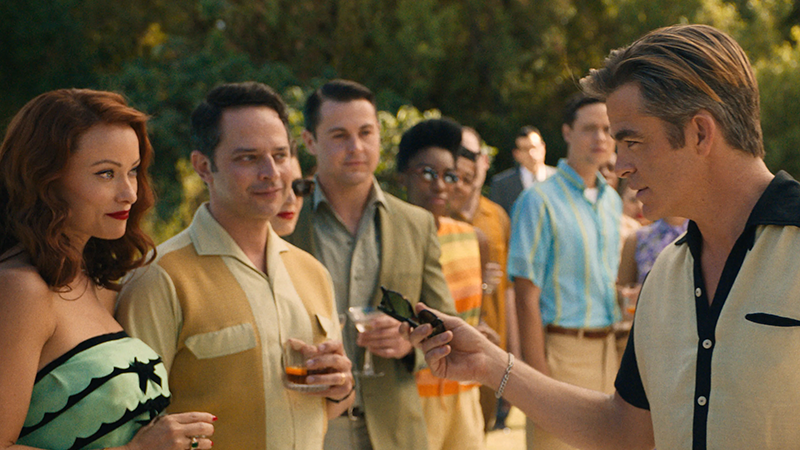 Does it work as well? Not exactly. Wilde’s themes and depictions of it feel like they have already been handled by The Stepford Wives. Sometimes it seems as though Don’t Worry Darling has nothing new to add to the conversation surrounding gender roles. That being said, it’s challenging to write societal issues into a genre film without coming off as preachy. This movie tries to avoid that, but the message is clear — especially in the film’s final act, which pulls back the curtain on what is happening behind the scenes.

This is a mystery thriller with some steamy moments. It can be jarring to cut between scenes of Harry Styles going down on Florence Pugh and strange, haunting ballet imagery. The imagery can sometimes feel scattered and there is little context for all of it, even after the movie gives you its explanation. Furthermore, whenever something scary happens, the film will generally cut to Alice (Pugh) waking up with a start. As a result, it only sometimes feels like she is in imminent real-world danger because all the threats occur in her mind.

Pugh acts circles around everyone else in this film. Styles is acceptable for most of the movie, but his performance elicited a few giggles from my audience during his more intense scenes. Despite its issues and occasional laughable moment, Don’t Worry Darling does what it sets out to do. Unfortunately, this is less strong than Wilde’s directorial debut Booksmart. Still, there is superb sound design and an action-packed finale sequence that feels mostly satisfying, even if the resolution could be better than you’d hope for. It’s a watchable film, but don’t worry if you miss it in theaters.

A much-talked-about thriller is hitting HBO Max this week. On Monday, November 7, the streaming service will add Don’t Worry Darling to its…
Movies 3 months ago

The Don’t Worry Darling release date on streaming is near. The much-talked-about thriller has ended its theatrical run and is now hitting…
Movies 3 months ago

What did you see this weekend?
Movies 4 months ago