Six months after the release of Ti West’s elderly slasher movie, X, West gives us a prequel centered around the villain of that film. Pearl is a not-so-long-awaited slasher film set in 1918 against the backdrop of World War I and the Spanish Flu pandemic. Mia Goth reprises her role as Pearl in her origin story. She’s a young woman trying to be a Hollywood star but she comes into conflict with her devout mother and ailing father. West delivers another shocking slasher, as Pearl is a decently crafted film that goes into a killer’s backstory.

West successfully updates his cinematic universe for the times. While X was set in 1979 and looked like it was made in that era of 20th-century slashers, Pearl is set a century in the past. The visual aesthetic matches that step decades prior, with the movie offering a Technicolor style along the lines of The Wizard of Oz. The opening credits and title card are a product of this era, allowing for a jarring contrast from the style of X, which made full use of the ’70s pornographic premise.

This movie begins with a Disney-style opening, with deceptively orchestral music that would almost have you believe you’re in for an age-old family film. Everything feels happy and whimsical as we are introduced to our young protagonist, who dreams of getting off her farm and becoming an actress in Hollywood. However, the cute, bright-eyed nature of the film does not last long. You’re not seated for this origin story to see a happy-go-lucky, heartwarming tale. Once the movie takes a dark turn, it commits to it and we get the heart-stopping kills that the film promises.

But this movie’s key risk is not focusing on the kills very much. While they’re there, Pearl is much more of a family melodrama that takes a shocking twist. Sometimes, it feels like the viewing experience would be better if you were expecting no kills at all so that once it happens, it becomes a shock. The movie pulls a lot of drama out of Pearl’s relationship with her family. She has a strict, disapproving mother named Ruth (Tandi Wright), with whom she shares a lot of tension as they both have to care for Pearl’s father (Matthew Sunderland). 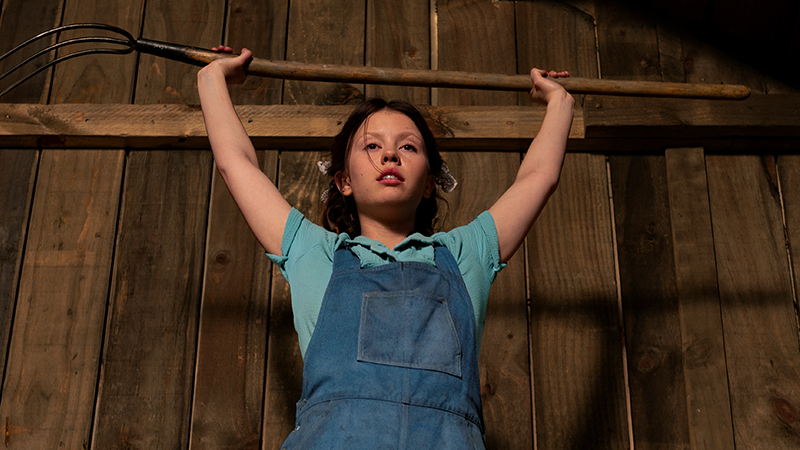 The film uses family drama as much as possible while sometimes feeling a bit conventional and familiar in how it tells that story. The family dynamics don’t offer much originality, but they do an excellent job filling in some holes in Pearl’s backstory. There are nods to X, but the film tells its own story and knows how to cater to its audience. This is more of a drama with slasher elements, but that can sometimes hurt the movie, as it’s not as gripping, suspenseful, or exciting as X was due to their differing ambitions.

But the selling point here is Mia Goth. She did an excellent job with her dual role as Max and Pearl in X, so much so that I did not know the same person played them. This time, Goth gets free reign as an unhinged killer while nailing her emotional scenes. She delivers a long monologue in one take and her co-writing credit on this film shows her creative influence and passion for bringing this project to life. She is the selling point for this movie, especially in Pearl‘s haunting final shot.

Overall, West doesn’t deliver the way he did with X, but he manages to do a lot. This film was written during the production of its predecessor and he already has another movie in this series planned called MaXXXine, set in 1985. However, before we get there, it is worth it for X fans to check out this prequel with a lot of dark ideas — many of which are executed superbly. Between the two movies, this is the one you’ll be less likely to rewatch, but it works as a decent prequel.

On the official DC blog, DC Studios Co-CEO James Gunn spoke about he and fellow Co-CEO Peter Safran’s ambition to…
Movies 18 hours ago

With Marvel Studios’ Fantastic Four set for release in 2025, director Matt Shakman recently revealed that filming on the project…
Movies 16 hours ago

The Sword Art Online franchise is one with many peaks and valleys. While I’m fond of the “trapped in a…
Anime 6 days ago

Few directors have been as revered and reviled as M. Night Shyamalan. His career has seen the highs of The Sixth…
Movies 7 days ago

Movies are attractive. Sometimes, it’s the fresh premise. Other times, it’s the esteemed director behind the wheel. However, nothing is…
Movies 1 week ago

Square Enix’s fantasies take different forms, but none are quite like Forspoken. This action RPG’s fantasy isn’t final and blends…
Games 2 weeks ago