Vampire films have gone out of style. The concept of a creature with fangs sucking the blood out of people’s necks while being killed by garlic and sunlight is so absurd that they have primarily been used in comedy recently, as seen in films like Hotel Transylvania and What We Do In the Shadows. However, the newest Netflix original dares to bring serious vampires back with Day Shift, an action comedy about a blue-collar pool cleaner named Bud Jablonski (Jamie Foxx) working to provide for his family the only way he knows how: by killing vampires and selling their teeth.

Day Shift is a strangely entertaining vampire movie that may not be a good film in the traditional sense but offers quite a viewing experience on its own. The screenplay, written by Tyler Tice and Shay Hatten, does an excellent job of establishing the character of Bud, showing him as a well-meaning father working hard to provide for his daughter. However, he needs $10,000 in less than a week, or his family will move to Florida to save money. This sets up strong emotional stakes and a ticking clock for Bud to make money — no matter the cost.

This film is helmed by J.J. Perry, who has spent decades working in Hollywood as a stuntman, making this his directorial debut. This is a similar step taken by John Wick director Chad Stahelski, and they both use their background to create some excellent action sequences. This movie has a fair share of fights and chases, and at times, it feels like there should have been more of them, if only because the film is never as entertaining as it probably could have been. The concept of hunting vampires is excellent, but the movie never sees that through to its full potential.

At the center of Day Shift are Bud and Seth (Dave Franco), a mismatched duo where Bud is a badass vampire hunter and Seth is a by-the-numbers accountant forced into the field. The juxtaposition of a hardcore action hero and a desk jockey is cliché buddy cop territory. Still, it’s a formula that works because of how funny it is to see these personalities clash. Foxx and Franco play off each other very well, and they have great chemistry, screen presence, and star power. They don’t have the makings of an iconic duo like Lee and Carter in Rush Hour, but the film takes their relationship into unexpected places. 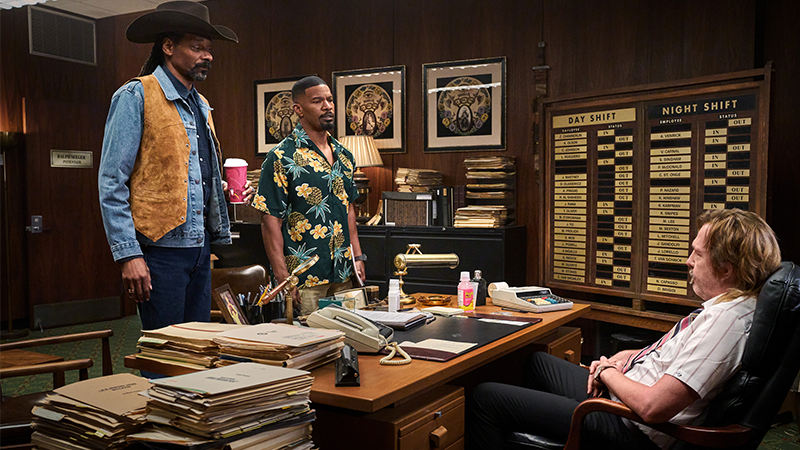 This is a prime throwback movie. Everything about Day Shift feels like it was made in the early 2000s, with a tone similar to Blade and Underworld. There’s a comedic spin on everything, but this movie revels in the absurdity of its action sequences, which require a suspension of disbelief. While the film offers the more current drone shots seen in movies like Ambulance and The Gray Man, everything feels like a product of days gone by and offers more entertainment value than I’m willing to admit. It’s a movie that’s very easy to hate, but one that you secretly enjoy.

Regarding actual issues, the villain, Audrey San Fernando (Karla Souza), is extremely weak and forgettable. Her motivations are established, but there is nothing to put her above generic action movie villain territory. Furthermore, Heather (Natasha Liu Bordizzo) gets a significant role in the final act that doesn’t feel earned due to a lack of screentime before it. It feels as if she appeared in a few deleted scenes, as her involvement in the plot is sudden and strange. There are moments where the dialogue can be terrible, and the writing is never strong enough to make this better than the average Netflix original.

However even with that in mind, Day Shift remains a lot of fun. The characters are generally established and there are a few humorous moments. While the movie can sometimes feel like it loses sight of Bud’s financial goal to go down a more conventional story route, it’s never dull. Every once in a while, it’s nice to sit back and enjoy a good ol’ guilty pleasure, and you’re going to find that with all the blood, guts, and body parts this movie has to offer — maybe even more than you’re willing to admit.

Marvel Studios has released a new behind-the-scenes video taking a look at how the Black Panther: Wakanda Forever underwater sequences…
Movies 46 mins ago

Everyone loves Eddie Murphy. His foul-mouthed shenanigans have delighted audiences since he first stormed onto Saturday Night Live in a…
Movies 3 days ago

Gerard Butler’s career as an action hero continues. Since his iconic Spartan role in 300, his filmography has seen the (mild)…
Movies 2 weeks ago

Many Disney animated classics have retained immense relevance in the years since their release. Films like Aladdin, Beauty and the…
Movies 3 weeks ago