Not Okay opens with a content warning, alerting audience members of its unlikable female protagonist. That is one hell of a way to kick off this satirical black comedy about the most hated woman in America. Her name is Danni Sanders (Zoey Deutch), and the opening montage begins with a series of hateful tweets and videos about her. So how did she gain this level of notoriety? That is the question that writer/director Quinn Shephard spends an hour and 40 minutes answering in a film that has a lot to like, but ultimately never meets its lofty ambitions.

This movie takes a considerable risk with its premise. In an age of internet hate, where it’s so easy to jump on the bandwagon and send hateful comments directly to some of the most famous figures ever, Shephard has decided to make that hated public figure the protagonist of her film. Danni is a clout-chasing wannabe social media influencer working at a magazine. She is superficial, tone-deaf, and embodies the character who is typically the antagonist in many high school comedies. A person you would want to get hit by a bus is hardly the protagonist you would expect, but here she is, front and center.

As she struggles to get the fame she is looking for, she Photoshops a few pictures of herself pretending to be on a writer’s retreat in Paris. Her attempt at fame ends up victorious, but not in the way she had hoped. A surprising inciting event kicks off a long series of lies, deceptions, and acts of activism. The setup is outrageous, but the movie doesn’t always commit to that nature, creating a tonally inconsistent experience. A film with a fun first act filled with 2022 lingo ultimately does not amount to something worthwhile.

This is a black comedy that deals with real-life issues. While many filmmakers have taken their shot at the genre before, Shephard does it in a way that feels more puzzling than entertaining. Many scenes in the second act miss the opportunity for all the comedy, irony, and tension that comes out of a movie where the protagonist lies in almost every scene she’s in. The dialogue doesn’t always pop the way it should, and the movie isn’t nearly as funny as it could be. Part of this is a result of the film trying to be too many things simultaneously. 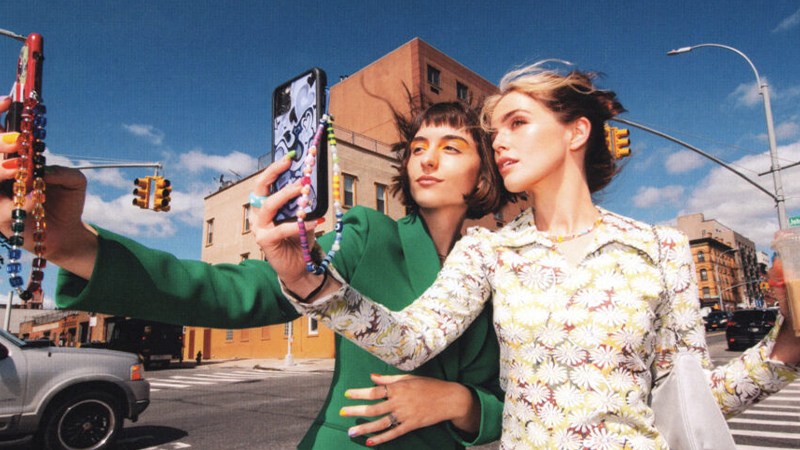 Not Okay can be a strange tonal balance between a lighthearted comedy and a piercing drama about real-life American politics. This is exemplified the most by the two supporting characters of the film. One of them is Colin (Dylan O’Brien), a successful influencer whom Danni takes an interest in. His performance, complete with vape and an interesting speaking pattern, is straight out of a comedy and proves to be entertaining in all the right ways. However, Danni befriends another character named Rowan (Mia Isaac), a young activist who survived a school shooting. She provides much of the film’s dramatic weight with her tragic backstory and the growing relationship between Rowan and Danni.

While both supporting performances are phenomenal, they feel like they belong in different movies. Colin would be great in a stoner comedy, and Rowan would be great in a political drama. Regardless, they are both excellent in their roles. Deutch is also pitch-perfect as her character, who gets the audience behind her despite being so unlikable. As this is Deutch and O’Brien’s second paired on-screen outing this year after The Outfit, these two bring chemistry into the film, and their characters’ relationship is fun.

Not Okay ultimately would have benefitted from picking one lane and sticking with it. Many scenes feel out of place, such a recurring idea where Danni is haunted by visions of an antagonist, which almost feels like a psychological thriller. There were many different routes for Shephard to take, and she did all of them. The movie smashes to credits earlier than you would expect, and the ultimate result is an occasionally entertaining movie that never quite succeeds at everything it wants to be.

Disclosure: The critic attended a press screening for ComingSoon’s Not Okay review

ComingSoon Editor-in-Chief Tyler Treese spoke to The Drop stars Anna Konkle and Jermaine Fowler about their hilarious Hulu comedy, which…
Movies 2 weeks ago

ComingSoon spoke to The Drop stars Jillian Bell and Joshua Leonard, who also co-wrote the movie, about Hulu’s hilarious comedy…
Movies 3 weeks ago

Darren Aronofsky (Requiem for a Dream, Black Swan) graces the big screen again with The Whale, his newest psychological drama based on…
Movies 1 month ago

Hulu has dropped the official trailer for The Drop, the upcoming dark comedy starring PEN15‘s Anna Konkle and Coming 2…
Movies 2 months ago