The 355 Review: An Unimaginative Thriller With Mediocre Action

The 2022 movie slate is kicked off with The 355, an action spy thriller that follows CIA agent Mace Brown (Jessica Chastain) as she teams up with other international agents. They have to retrieve a drive that can wreak havoc with the press of a few buttons before it gets into the wrong hands. While the male-dominated spy genre has delivered with the Mission: Impossible and James Bond series, the prospect of an original all-female spy film was alluring. Unfortunately, the movie fails to deliver on the concept’s promise, fumbling its execution on nearly every level.

It feels as if this movie began with people coming up with an excellent idea of assembling a diverse group of female agents to work together and kick ass. Unfortunately, when it came time for these people to come up with another interesting idea, they gave up, and the result was a generic, forgettable action movie with nothing new to offer beyond that one novel idea. The film is co-written and directed by Simon Kinberg, who recently wrote and directed the critically panned Dark Phoenix. While Kinberg has written a few hits in the past, this was another failed directorial attempt as he has made a movie lacking in any personality.

The 355 tells a remarkably conventional story for a spy thriller, and it does so without an ounce of charm. The premise surrounding good guys and bad guys chasing after a MacGuffin has never been less interesting because while the stakes are high, the movie does a terrible job of putting the characters in danger. Much of the film doesn’t have a villain; instead, the movie has a few goons chasing after the drive, and they don’t have much of a presence. Although we know what the villains will be capable of if they have the drive, we don’t understand their motivations or precisely what they will do if they succeed.
It’s a frustratingly predictable film, setting up a storyline in the opening act where Kinberg expects to surprise you later on with a plot twist. However, it’s the most obvious revelation that anyone who has watched a spy movie will see coming from miles away. 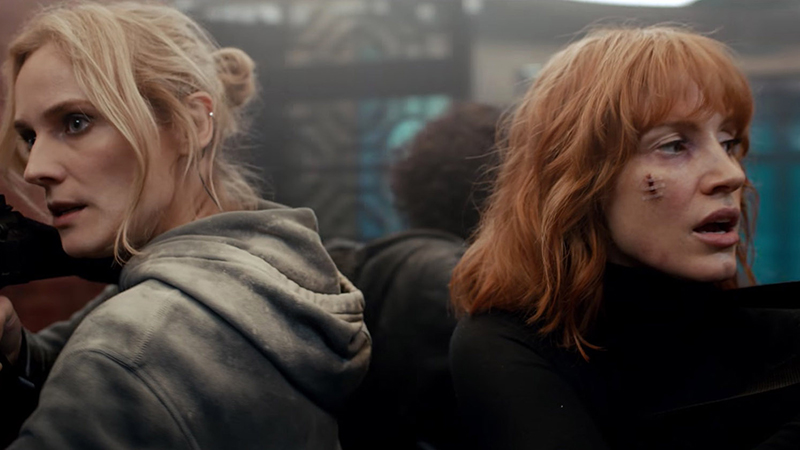 Unfortunately, the screenplay lacks anything inventive to the point where if it weren’t for the prowess and bankability of our leading ladies, the movie would have easily gone direct-to-video. But the movie squanders the talent of the main actresses. None of them have any chemistry with each other, all of them feeling as if a committee assembled them to stand on screen together and shoot guns. Penélope Cruz comes the closest to having a personality as Graciela, a psychologist out of her depth in the world of international espionage who wants to return to her husband and sons. She spends most of the movie whimpering about her situation and comes the closest to having an arc. Unfortunately, every other character has interchangeable personalities, all sounding the same.

The movie’s characterization attempts come in a brief moment where we feel a history between Mace and her colleague, Nick (Sebastian Stan). But their emotional moments are rushed, and all we get beyond that is a scene where our heroes sit at a table and verbally state their backstories. There is little room for an emotional connection to any of these characters as the dialogue in this film is either heavily clichéd or riddled with exposition. None of them are likable enough to become a fan favorite, all serving as one-dimensional spies that you don’t get invested in.

But is this the entertaining action thriller that it could have been? Unfortunately not. The action sequences are remarkably unremarkable, with Kinberg’s forgettable camera choices and basic handheld coverage. The 355 contains several shootouts, and none of them stand out above the rest, not even the finale. The film’s conviction to take itself seriously with nothing to offer is its ultimate downfall. It feels like the movie was made for the sake of having an all-female spy movie rather than to tell a good story with compelling characters. This movie could have been a show-stopping globetrotting spy film but is instead an unimaginative thriller that wastes its star talents on a bland script, mediocre action, and underbaked themes.

As ComingSoon’s review policy explains, a score of 4 equates to “Poor.” The negatives overweigh the positive aspects making it a struggle to get through.

Disclosure: The critic watched a screener for ComingSoon’s The 355 review.

Manners maketh man for the third time in The King’s Man, the newest installment in the Kingsman spy action franchise…
Movies 1 year ago

The 355 Trailer: Five Badass Spies Must Work Together or Die Alone

Universal Pushes Simon Kinberg’s The 355 Back a Year