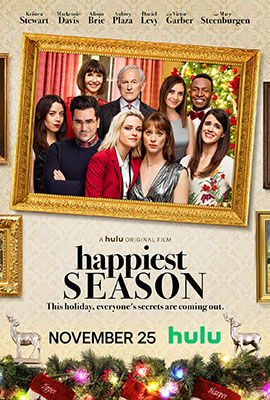 Before I begin, I want to throw myself under the bus on two facts that used to be true about me: I was not a fan of romantic comedies and I would give every movie I liked a perfect 10-star rating. The former has changed over the past few years as the genre has seen a resurgence with brilliant new and heartwarming stories while the latter has changed somewhat slightly as I find I still try to enjoy every movie I see, though now rarely handing out the 10-out-of-10s I used to, so when I tell you that Happiest Season is the quintessential holiday rom-com sure to be revisited for decades to come, please believe me as I don’t deliver that lightly.

Meeting your girlfriend’s family for the first time can be tough. Planning to propose at her family’s annual Christmas dinner — until you realize that they don’t even know she’s gay — is even harder. When Abby (Kristen Stewart) learns that Harper (Mackenzie Davis) has kept their relationship a secret from her family, she begins to question the girlfriend she thought she knew.

There’s been plenty of holiday and gay rom-coms over the years, but the two have never come together for a major studio production and co-writer/director Clea DuVall and co-writer Mary Holland not only do a fantastic job of playing into each subgenre’s strengths, they also don’t fall short of the expectations set for the film in its groundbreaking nature. One of the things that really works best about the story itself is that, though there’s the “home for the holidays” and “keep it secret” sense of humor running throughout the film, it never feels as though it’s forcing its timely themes of gay acceptance down viewers’ throats but is rather treating them with an organic feeling.

There are no stereotypically flamboyant or egregiously-conservative personas present in the film, but rather real people living their lives and allowing their characters to just feel wholly authentic in every moment they’re on screen. Dan Levy’s John and Aubrey Plaza’s Riley are two of the best examples of representation in the story, as the former may have a little outrageousness to his actions but yet never feels like a poorly-written or overly-acted caricature but rather an outright funny and kind-hearted supporting character while the latter is depicted so charismatically and so neutrally that she almost feels as though she could be played by any gender or sexual identity and that feels so true to the film’s message.

That being said, the film isn’t afraid to use its gay sensibilities for both gut-busting comedy and some truly powerful moments throughout, namely in Abby and Harper’s struggles with keeping their relationship a secret and Abby learning new things about the love of her life. Utilizing a beautifully-drawn art montage for its opening credits sequence, audiences instantly fall in love with the couple that it seems as though nothing can act as a road bump for their happy ending, but the hurdles DuVall and Holland present are very real for those in Abby, Harper and DuVall’s situation and are depicted in very moving and honest ways that doesn’t prevent anyone from getting a redemption by the end of the story. As the story progresses and we learn about the rest of the family’s own internal struggles, we come to have a better appreciation for them and the actions they take towards the end is the heartwarming tale of acceptance and love we could all use in our lives, especially this year.

Happiest Season‘s heartwarming and moving story is further bolstered by the stellar performances from its breathtaking ensemble of both LGBTQ+ and straight performers, with the shining lights coming from Stewart, Davis and Levy. The chemistry between Stewart and Davis feels so natural and marvelous to watch, Levy not only taps into the sassy nature of the quick-witted John but also the sweet-natured desire of seeing his friend be happy, even if her desire for a heteronormative title on her relationship with Harper isn’t something he’s fully behind.

Clea DuVall’s second directorial effort not only further establishes her as a powerhouse talent behind the camera, but also delivers arguably the best holiday rom-com of the millennium and one of the best Christmas films of all-time that is sure to become a part of many viewers’ tradition watchlists for years to come.

Marry Me Review: An Enjoyable Rom-Com

Love is in the air this Valentine’s Day as a new romantic comedy arrives in movie theaters. Marry Me follows…
Movies 12 months ago

Mandatory Streamers Special Edition Highlighting the Best Movies to Stream Over the Holiday!

What are you streaming over the holidays?
Movies 2 years ago

Despite many films getting pushed to 2021, there were still plenty of worthy 2020 entries!
Movies 2 years ago