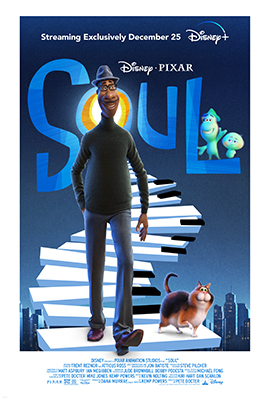 Pixar for years has explored the concept of loss and the very nature of life and existence in their films, but the studio has rarely full-on touched up on the themes of death and what comes next and with their latest effort, Soul, the Oscar-winning animation house has delivered another beautifully animated and emotionally powerful tale full of unique and compelling thoughts on the afterlife, even if a fairly familiar formula and rushed pacing occasionally hamper the experience.

Joe Gardner, a middle school music teacher, has long dreamed of performing jazz music onstage, and finally gets a chance after impressing other jazz musicians during an opening act at the Half Note Club. However, an untimely accident causes Gardner’s soul to be separated from his body and begin to proceed to the Great Beyond, and Gardner escapes to the Great Before, a world where souls develop personalities, quirks, and traits before being sent off to Earth. There, Gardner must work with souls in training at the Great Before, such as 22, a soul with a dim view on the concept of life, in order to return to Earth before his body dies.

It’s not often films in general, especially animated films, have been willing to examine existentialism and what happens in life after death, with Pixar’s Coco being one of the most notable and recent, but unlike the Mexican culture-inspired adventure through the Land of the Dead, the world of the afterlife established in Soul may be one of the most fascinating and original to date, even if it feels as though the filmmakers are unwilling to go one step further and establish what the “end” may entail. The Great Beyond feels a little underwhelming as not only are we offered any kind of explanation of what comes from going there, but its design also feels a little too simple, appearing as one giant light for souls to head towards akin to what everyone supposedly sees whilst dying.

The land of The Great Before and the job of the mentors is such a captivating and spellbinding idea with beautiful areas to look at, including the enthralling Hall of You, in which mentors can share their past experiences with their new souls, the magical Hall of Everything, in which new souls can find what their creative spark is to head down to Earth, and the colorful and vibrant Personality Pavilions, where new souls are given their various character traits. The problem with them, however, is that despite the amount of thought and creativity clearly poured into these areas and the potential hijinks to be had here, as well as the mesmerizing Astral Plane where souls when they’re “in the zone,” we race through these worlds to get back to Earth for a fairly predictable fish-out-of-water-meets-Freaky-Friday adventure.

Granted, this formula is a necessity for the film’s themes and offers a lot of great gags and powerful moments, from Joe learning he doesn’t know the closest people in his life as well as he thinks to finally being able to have an honest conversation with his dream-critiquing mother. The problem with this, though, is that it’s a story that we’ve seen time and again in countless body swap films and feels like a waste of originality that the film established in its opening act.

Some story problems aside, however, the film is an absolute thrill and full of emotional gut punches that Pixar knows how to do best, but it also offers one of its most refreshing and entertaining protagonist in Joe and the world of jazz he’s so attracted to in New York City, as well as everything from his local barber to his mom’s tailor shop. Every moment on Earth feels like a fully-realized and thoroughly-authentic depiction of many of its cultural touchstones, cementing Pixar’s first African-American protagonist as a very real and grounded portrayal rather than a failed attempt at offering a diverse story and character that some blockbuster studios still have problems depicting (cough, cough, Star Wars).

In addition to the beautiful animation, compelling story concepts and powerful voice cast, the film thoroughly shines thanks to its hypnotic soundtrack from Trent Reznor and Atticus Ross and exciting jazz compositions from John Batiste. The Nine Inch Nails founder and frontmen bring their distinctive ethereal sounds to the soul worlds while Batiste brings appropriately dazzling jazz notes to the mix, all of which helps add to the excitement of the story without ever distracting from the character moments or voice acting throughout.

Pixar rarely delivers a miss and Soul certainly keeps their winning streak alive thanks to its compelling themes and story, stellar animation, brilliant voice cast and captivating music, delivering one of its most mature and emotional films to date from the studio that mostly overcomes its rushed ending and poor pacing.

After listening to James Gunn’s plans for the DC Universe, I can only thank the superhero gods. This comic book…
Movies 28 mins ago

What did you think of Episode 2?
TV 3 months ago

In 2022, filmmakers decided it was time to make something personal and semi-autobiographical. James Gray made Armageddon Time, Alejandro G. Iñarritu…
Movies 3 months ago