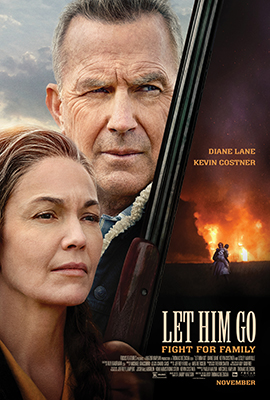 Will Brittain as Donnie Weboy

Written and Directed by Thomas Bezucha

After finding success early in his career both in front of and behind the camera in the genre, Kevin Costner has been slowly making his return to the world of Westerns and its various subgenres with everything from History’s Hatfields & McCoys to Paramount Network’s Yellowstone and now he’s exploring a different kind of Western with the crime drama Let Him Go and it has set itself up as one of the best outings in years for both he and his radiant costar Diane Lane.

Following the loss of their son, retired sheriff George Blackledge (Kevin Costner) and his wife Margaret (Diane Lane) leave their Montana ranch to rescue their young grandson from the clutches of a dangerous family living off the grid in the Dakotas, headed by matriarch Blanche Weboy. When they discover the Weboys have no intention of letting the child go, George and Margaret are left with no choice but to fight for their family.

Based on Larry Watson’s novel of the same name, the story features a lot of really original and compelling elements right form the start while also utilizing a number of major tropes of the genre, but mostly in a meaningful way for the characters and their respective journeys. Without anymore children under their roof, George and Margaret have slipped into a life of near absolute silence around one another in their later years, but Costner and Lane bring a quiet warmth and resignation to their protagonists that allows the audiences to still feel the love coming from the two, even if they still don’t always see eye-to-eye on life decisions.

As the plot progresses and disaster strikes, the story has every opportunity to dovetail into a generic action thriller, but writer/director Thomas Bezucha displays a strong grip on avoiding this path and choosing to deliver a more mature and emotional tale of revenge and reflection on past choices that mostly proves compelling to watch. There are some moments that feel a little too-on-the-nose or underwhelming in comparison to the plot as a whole, namely the side story involving runaway Native American drifter Peter Dragswolf, though Booboo Stewart does a solid enough job at offering a sympathetic new take on typically well-worn character tropes.

In addition to crafting a mostly balanced script, Bezucha offers the best visual direction of his career thus far, utilizing a color palette that is just muted enough to tap into the serious nature of the story’s thematics and also allows some beautiful contrasts in certain moments, namely its meditative driving sequences. Even in some of the film’s more lackluster moments, especially its fairly disappointing final act, Bezucha composes the scenes in such a compelling manner that it keeps audiences eyed glued to the screen.

Of the few things Zack Snyder got right during his DC Extended Universe tenure, casting was one of them and pairing Costner and Lane as Ma and Pa Kent was sublime, even if the films didn’t allow audiences to enjoy their natural chemistry long enough, but Bezucha clearly had the same thought as his reuniting of the two-time Oscar and Golden Globe winner and Oscar and Golden Globe nominee was superb. Costner and Lane’s connection to George and Margaret, both individually and as a couple, is thoroughly authentic and believable and the two just carry the film on their shoulders with ease as the camera rarely, if ever, leaves their sides. Alongside Costner and Lane is another deliciously wicked turn from Lesley Manville as the Weboy matriarch and a charming-yet-menacing supporting performance from Jeffrey Donovan as son Bill, both creating personas so easy to distrust and dislike yet whose performances make it so hard to want to see them leave the screen once introduced.

There may be some uneven pacing in its story and a few on-the-nose beats, but thanks to a fitting usage of the neo-Western genre’s tropes, a quiet and beautiful period setting, fantastic direction and phenomenal performances from its two leads and supporting cast, Let Him Go is an emotional and compelling piece that mostly overcomes its flaws.

The Kevin Costner and Diane Lane-starring pic is now in theaters!
Movies 2 years ago

Let Him Go collected $4.3M to claim the top spot
Movies 2 years ago