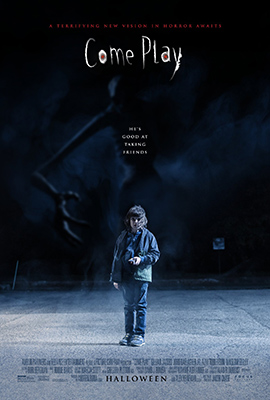 Written and Directed by Jacob Chase

“The American version of [insert title here]” can either be the biggest praise or the the harshest critique for a film in any genre, but especially in the horror genre, which has a fanbase that ranges from hungry solely for unique new stories to loving trips down nostalgia lane. With Amblin Partners joined in on the feature, Jacob Chase’s Come Play is certainly a mishmash of parts tapping into the feel of the latter, but thanks to some effective shocks and emotional storytelling, it still proves to be one of the better horror outings of recent years.

The story of Come Play, a feature length adaptation of Chase’s horror short Larry, focuses on Oliver, a lonely young boy who feels different from everyone else. Desperate for a friend, he seeks solace and refuge in his ever-present cell phone and tablet. When a mysterious creature uses Oliver’s devices against him to break into our world, Oliver’s parents (Gillian Jacobs and John Gallagher Jr.) must fight to save their son from the monster beyond the screen.

For those who it wasn’t apparent, the story is a clear borrowing of elements from Jennifer Kent’s The Babadook, although there are enough elements in Chase’s film to set itself apart from the 2014 masterpiece, including actually diagnosing its child protagonist with a specific disability instead of just an ambiguous placing on the spectrum and having the father alive and in the story. Granted with Kent’s film, the father’s absence is a key driving force for the story’s thematics, but the inclusion of the father feels much more resonant for the story of young Oliver.

As the story progresses and shows the various parts of Oliver’s life, including his visits to his therapist and troubles at school with other children, it becomes clear Chase has done a lot of research into how his character would move through the world and the struggles he’d face in connecting with both family and peers. This early establishment of a well-rounded and interesting portrayal of Oliver makes the emotional connection all that much easier for audiences as the terror slowly works its way into the story.

Much like Kent’s Babadook or even David F. Sandberg’s Lights Out, Chase does a nice job of taking his time to build the suspense surrounding the malevolent Larry before going a little heavy on the jump scares. Granted, many of the jump scares are very effective and expertly crafted, the writer/director clearly having a grasp on the nature of building the tension in a scene and offering fake-outs before suddenly pulling the rug out from audiences and sending their heart rates spiking.

One of the key ingredients that makes so many of the scares, both jump and atmospheric, so effective is the film’s incredible sound design throughout. While there is an emotional musical score from the always-great Roque Baños present in the film, Chase smartly chooses to keep it either low in the background or keep scenes quiet to keep audiences guessing as to whether something is about to happen or elevate much of the powerful dialogue scenes from the incredible performers Gillian Jacobs and John Gallagher Jr.’s Sarah and Marty. Like the best films full of jump scares from recent years, Chase’s decision to keep much of the film quieter allows for all of the air to be sucked out of viewers’ lungs as little hints and subtle appearances are on display in scenes of terror, followed by a horrific shock or a gotcha moment that allows the audience to chuckle at the fact they got got.

Come Play may feel like an assortment of pieces from other, better horror films, namely The Babadook, but thanks to some emotional storytelling, effective scares, wonderful performances from its cast and a downright shocker of an ending, it proves to be a plenty entertaining entry into the family horror genre.

With Marvel Studios’ Fantastic Four set for release in 2025, director Matt Shakman recently revealed that filming on the project…
Movies 7 hours ago

The first clip from Marvel Studios’ upcoming Ant-Man and The Wasp: Quantumania has been released featuring Scott Lang meeting Kang…
Movies 8 hours ago

On the official DC blog, DC Studios Co-CEO James Gunn spoke about he and fellow Co-CEO Peter Safran’s ambition to…
Movies 9 hours ago

Resident Evil: Welcome to Raccoon City Review: A Misfire of a Movie

The massively popular video game franchise that has spawned six movies (no, seriously) gets its seventh installment in a reboot…
Movies 1 year ago