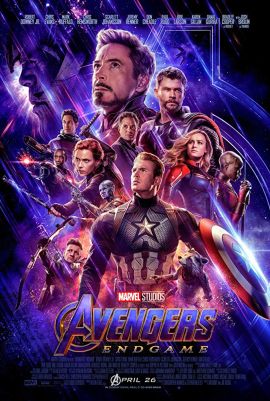 Directed by Anthony and Joe Russo

Summary:
After the events of Avengers: Infinity War, the world is left reeling. With half of all living things turned to dust, civilization has ground to a halt. People mourn the loss of loved ones, governments collapse, and survivors find themselves utterly lost.

The surviving Avengers don’t fare much better. Wracked with guilt over their defeat at the hands of Thanos, they feel personally responsible for the deaths. Each of the Avengers deals with the loss in unexpected ways.

Avengers: Endgame is rated PG-13 for sequences of sci-fi violence and action, and some language.

What Worked:
Eleven years of Marvel movies finally culminate in Avengers: Endgame, arguably one of the biggest movies of all time. Is it worth the wait? For the most part, yes.

First off, I have to give the Russos credit for taking the time to deal with the aftermath of the “snappening.” If half of all living things disappeared from the universe, it would have an unfathomable impact. This story allows screentime to explore how everyone reacts to it. We see abandoned cities. We see people falling into depression. But we also see people pulling themselves together and moving on. It’s an interesting look at post-traumatic stress and how everybody deals with it differently.

Along that train of thought, our heroes deal with the loss in unexpected ways. Thor handles it in a way that nobody sees coming yet is one of the highlights of the film. Hulk is also affected in a way that is very surprising yet is in line with the comics. But Hawkeye’s response is one of the more compelling of the numerous story threads. We see how the loss of his family utterly destroys him, yet also drives him the most when the opportunity arises to undo the damage. In fact, you could argue Hawkeye’s storyline is the core one of Avengers: Endgame. If you thought Jeremy Renner was shortchanged in Infinity War, this should make up for that.

This sequel continues one of the big appealing things from the previous films – the unexpected team-ups and battles. I won’t spoil them here, but we get to see Hulk face off with a familiar character from Doctor Strange, Captain America do battle with a character from his past, Rocket Raccoon trade barbs with Ant-Man, and more. It’s a lot of fun to see unfold before you.

While Spider-Man: Far From Home is technically the last film in this phase of Marvel movies, Avengers: Endgame neatly wraps up all of the lingering character threads from most of the previous films. We finally get payoffs from relationships and conflicts established in Iron Man, Captain America, Guardians of the Galaxy, Thor: Ragnarok, and others. Some of these threads are neatly wrapped while others are set up for new and interesting stories in the future.

Marvel Studios have always had tips of the hat to Marvel Comics readers and they do so again in Endgame. There are visual cues that come straight from the comic covers (I recognized one in particular from “Secret Wars” which made me happy). There are nods to recent stories in Hulk, Captain America, and Guardians of the Galaxy. But if you watched the Marvel TV shows, there are a couple of nods to you as well. “Peggy Carter” fans, take note. And in the finale, a character was shown that I thought was a new surprise but was actually a character from Iron Man 3 who I did not recognize. In short, if you followed the movies, TV shows, or comics over the years, there’s something that will make you happy.

Finally, I must mention the epic final battle. It’s a fun treat on every level. We see characters combine power moves for combos worthy of a video game. We see characters pair up in unexpected ways. And at one point a number of the team members form up in a way that will inevitably make audiences cheer. The final battle could have easily turned into a CGI free-for-all blur, but there are enough pauses and highlights that allow you to catch your breath and take it all in. Overall, it’s a satisfying culmination of all of the films.

What Didn’t Work:
As much as Avengers: Endgame  is enjoyable, it’s not flawless. First of all, the plan that the Avengers unfold will require charts and graphs to understand. After the movie, we all sat in the audience trying to understand what had just unfolded and what the implications were for the story going forward. Maybe that’s part of the fun, but it does seem to create new plot holes.

In a cast this big, some characters are inevitably shortchanged. One of them is Captain Marvel which is disappointing considering her recent successful film. She’s largely not present in the movie and when she eventually shows up, she’s so overpowered that her presence becomes anti-climactic. And her explanation for not being present in the previous events in the film is deeply dissatisfying.

While my next point isn’t necessarily a problem for me, it was a problem for my kids. Avengers: Endgame is pretty light on action for the first half to three quarters of the film. The early part of the story is a character drama dealing with loss, depression, and mourning. While those are interesting for adults, it tends to bore kids who are there to see Hulk smash. And with a 3 hour running time, that’s a lot of time to see your heroes mope before heading into action. This tone is apparent in the end credits music as it features a light, airy music rather than the big, bombastic score you might expect from a summer superhero film. While on the topic of kids, as a parent I was a little surprised by the amount of language in the film. Profanities come from young children and even Captain America despite his admonition of “language” in Avengers: Age of Ultron. Considering this is a Disney film that a lot of kids will be watching and imitating, I was a little surprised.

One final note – there was no end scene at the press screening I attended. While they could potentially add one later, I’ve been told the version we saw was the final theatrical version. So a lot of fans may be disappointed. But there is a Stan Lee cameo, so that should help.

Avengers: Endgame is a solid ending to 11 years of Marvel movies. It has been quite a ride and fans should leave the theater satisfied. But it also sets up an interesting future for our heroes and it will be fun to see where things go from here. Be sure to see it on the big screen with as many fans as possible.

The Fast & Furious franchise is celebrating its history during the lead-up to the debut of the Fast X trailer.…
Movies 5 days ago