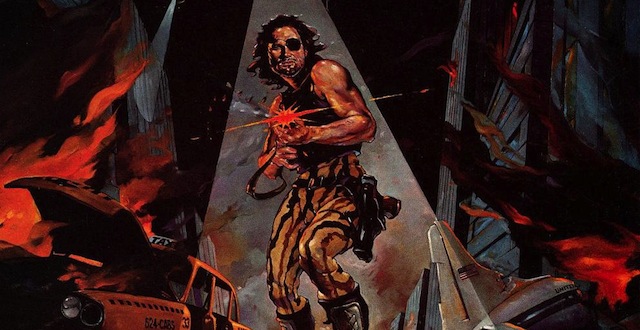 For some time, 20th Century Fox has been trying to bring Snake Plissken back to the big screen. Today, The Hollywood Reporter has an update on the status of the proposed Escape From New York remake, bringing word that Luther creator Neil Cross has today signed on to provide the screenplay. As previously reported, John Carpenter himself is set to serve as executive producer.

Set in a dystopian future in the year 1997, the 1981 original stars Kurt Russell as Snake Plissken, an eyed-patched convict sent into a maximum security prison (formerly the island of Manhattan) to rescue the President.

Carpenter directed his own sequel to the original, Escape From L.A., in 1996, although that film is decidedly less-beloved by fans of the original.

It has been over two years since the idea of rebooting the property made headlines with an attempt by Joel Silver and StudioCanal. Before that, New Line Cinema had been planning a remake for some time with The Crazies director Breck Eisner attached to helm. Before that, Len Wiseman was planning a version that would have starred Gerard Butler in the Plissken role.

According to today’s update, 20th Century Fox is aiming to reboot Escape From New York as a franchise in the same way that they rebooted Planet of the Apes with Rupert Wyatt’s 2011 Rise of the Planet of the Apes. What that means for any potential continuity with the previous films remains to be seen.

Carpenter, who, before this year was never involved in any of the reboot plans, last directed 2010’s The Ward, a horror thriller starring Amber Heard.

The new Escape From New York does not yet have a director, but Alex Heineman and Andrew Rona of The Picture Company are attached to serve as producers.

What do you think about Neil Cross’ involvement with Escape From New York? Are you looking forward to the remake? Let us known in the comments below!

New Escape From New York Movie Won’t Be a Remake

The British psychological crime thriller Luther premiered in 2010 and quickly became a hit, running for a total of 20 episodes.…
Movies 2 months ago

According to Bloody Disgusting, the directing team Radio Silence — made up of Matt Bettinelli-Olpin, Tyler Gillett, and Chad Villella —…
Movies 3 months ago