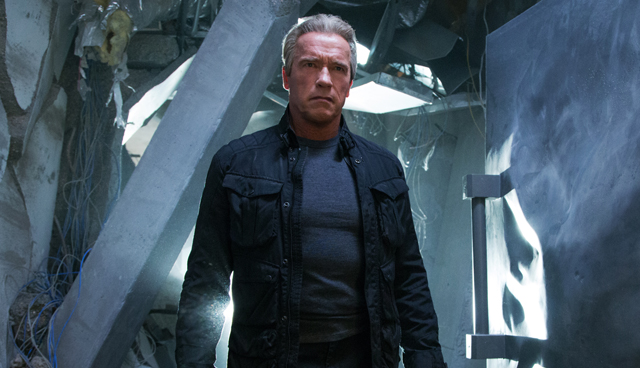 Paramount Pictures and Skydance Productions have just debuted a new behind-the-scenes featurette for their upcoming franchise reboot, Terminator Genisys. This one focuses on the relationship between Sarah Connor (Emilia Clarke) and “Guardian,” the aged T-800 played by Arnold Schwarzenegger. Check it out in the player below!

In the film, John Connor (Jason Clarke), the leader of the human resistance, sends Sgt. Kyle Reese (Jai Courtney) back to 1984 to protect Sarah Connor and safeguard the future, but an unexpected turn of events creates a fractured timeline. Now, Sgt. Reese finds himself in a new and unfamiliar version of the past, where he is faced with unlikely allies, including the Guardian, dangerous new enemies, and an unexpected new mission: To reset the future…

Also starring J.K. Simmons, Dayo Okeniyi, Matthew Smith, Courtney B. Vance and Byung-Hun Lee, Terminator Genisys is directed by Thor: The Dark World‘s Alan Taylor from a screenplay by Laeta Kalogridis and Patrick Lussier. The movie will hit theaters on July 1, 2015 and is the first in a planned trilogy of films.

Paramount also recently released a video of James Cameron himself reacting to having seen Terminator Genisys. You can check it out right here.

"Maybe one day they’ll release it as a comic or something."
Movies 3 years ago

The film debuts on November 1
Movies 3 years ago

The sci-fi action blockbuster is set to hit theaters on November 1!
Movies 4 years ago