With all the publicity surrounding the new Dune movie, including McFarlane Toys‘ first reveals, one major character mostly remained hidden until now. Baron Vladimir Harkonnen, memorably portrayed as a human blimp with a skin condition in the David Lynch version. The trailer offered a hint of Stellan Skarsgard‘s version in what looked like a mud bath, but now McFarlane Toys’ action figure gives us a full look at his outfit from the film (via SuperHeroHype). 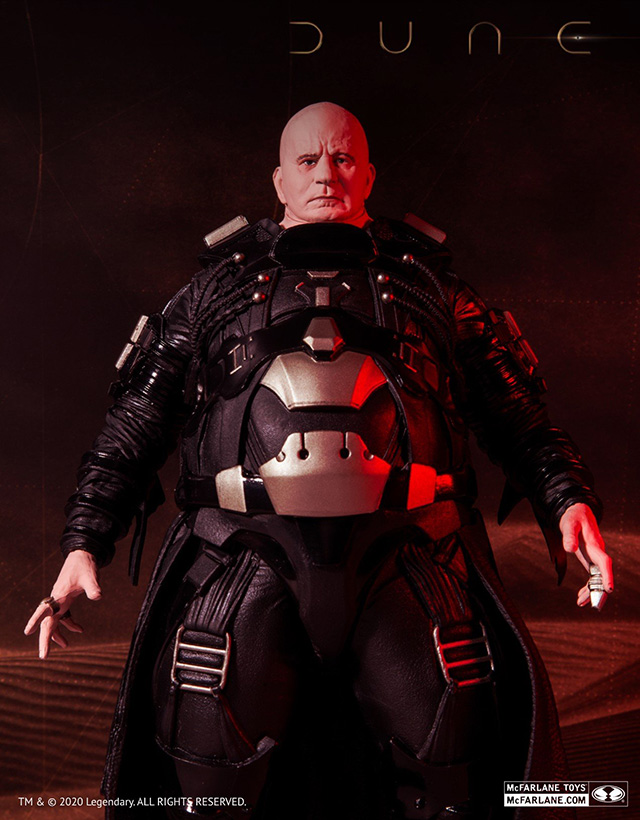 His skin may be cleaner, but the villainous head of House Harkonnen looks just as morbidly obese. Not one to get his hands dirty in the action himself, the Baron likely leaves most of the active evildoing to his nephew Glossu Rabban.

RELATED: POLL RESULTS: What Did You Think of the Dune Trailer?

The figure depicted is a 12-inch figure, which most likely means a larger scale than the others, and barely articulated. McFarlane Toys knows the market prefers poseable characters in the six to seven-inch scale, but their Witcher and Cyberpunk 2077 lines recently included more dynamically posed, fixed-position 12-inchers.

Could we see him in a smaller scale as well? Assuming the other figures sell, it seems likely. We still haven’t seen the Baron’s archrival Duke Leto in plastic form yet, and the Dune toy universe would feel incomplete without them.

The Baron hits stores this fall. Whether or not the movie opens on schedule, we shall see.

Will you make this bloated baddie part of your toy roster? Let us know in comments.

Just in time to celebrate the release of Zack Snyder's Justice League!
Movies 2 years ago

“The lessons hidden inside the books have changed my life in ways that have made me more difficult to love."
Movies 2 years ago

Gift ideas from some of our favorite companies like Sideshow Collectibles, Mondo, Hasbro & more!
Movies 2 years ago