ComingSoon spoke with actor Douglas Booth about his role as Red Bill in AMC’s western series That Dirty Black Bag. Booth talked about balancing Bill’s intensity and vulnerability, and what other historical figures he’d be interested in playing.

“In the debut season of That Dirty Black Bag, in a town full of bounty hunters, bandits, and bloody vendettas, Arthur McCoy is the incorruptible sheriff who’s trying to overcome his troubled past to bring law and order to this new frontier,” reads the series’ synopsis. “On the other side of things is Red Bill, an infamous solitary bounty hunter known for decapitating his victims and stuffing their heads into a dirty black bag. When the paths of these two men collide, they both learn that in the wild west, there are no heroes, nobody is invincible, and the predators may become the prey.”

The first season of That Dirty Black Bag will be available on Blu-ray and DVD on July 26.

Spencer Legacy: What stood out to you about Bill’s character when you were pitched this project?

Douglas Booth: Well, I think I’d never played anything like him before in my career, so it was something new for me — that character. I had always wanted to be in a Western. I used to ride as a kid, I used to love riding, and the idea of being in a Western was just a bit of a dream for me. Then I just think I liked the story. I loved how complicated these characters were. They were all living in contentment. No one was fully satisfied and no one was wholly good and no one was wholly bad. It wasn’t black and white, and I found that interesting as an actor.

How did you find the balance between Bill’s aggressive nature and his vulnerability?

I found it interesting to explore. I started [at] the beginning, which was, what made him this person when we meet him? What’s happened to him before this story for him to be this person that he is. I started with him as a child and he clearly lost his mother at a young age. I’m a mother’s boy. I’m very close to my mother. I used to have nightmares when I was a young child about losing my mother, which was always horrible. So that was kind of a place … that was my access point, I guess, starting from that place of pain. Seeing how when trauma isn’t dealt with in the right way, how that can mutate into something quite horrific.

And as someone that’s very unhappy, balancing his, his aggressiveness and his vulnerability … I think vulnerability always comes slightly easier to me to play. So that was always there, and it was about holding that back for as long as possible in the show. To really keep that in and keep him this bottled-up ball of hate and anger, then as the show goes on, some of my favorite stuff is in episode six, when he goes into the Red Lantern. He goes in and he plays, I think, Chopin on the piano. Just him doing that, one thing tells you so much about this character there. There’s this softness, there’s this educated side to him. You can feel his mother’s influence over that. You can always imagine him sat there next to his mom playing that on the piano. Then he goes, and he touches the dresses in the Red Lantern and the material and the softness and the bed, the things that he hasn’t experienced for a long time. I love the, the gradual reveal of his vulnerabilities, I found that interesting, and it was a joy to play.

You mentioned that you and Dominic are close friends, so did that chemistry or rivalry come naturally?

His mother was my nursery school teacher, so I’ve known him for a long time. Yeah, we wind each other up so much. Part of the reason we knew this was going to work for us [is that] we know how to push each other’s buttons in the best way, and we are great friends. We have a lot of fun. We knew we could play this rivalry just right.

Your accent was fantastic. Was it difficult to master that?

Not so much … a little bit. Obviously it’s not my own accent, but as actors, even just auditioning over a 12 year career, you’re doing an American accent all the time. I played Americans before in shows, but yeah, I played around with a different couple of ways to play it. I dropped his pitch and made him feel a little gnarly. That’s always fun. That’s the fun part of a job, you know? Finding how your character walks, how your character speaks, how your character interacts and stuff. That’s all the fun of equity. 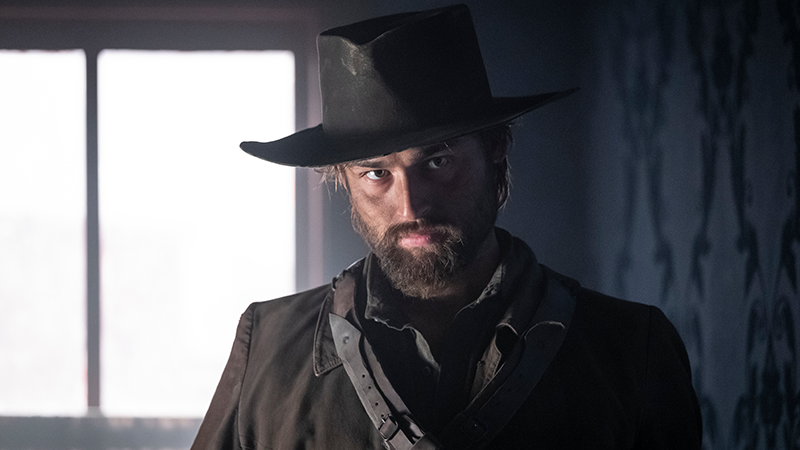 For the more intense scenes, how did you get into that head space?

You just find yourself there. We started by shooting the stuff with Aidan Gillen in his dungeon. It’s kind of done for you. I mean, you’re tied up — literally tied up — hung upside down, you get the shit kicked out of you, literally. You come away battered and bruised and you just go to these places … you’re covered in real maggots. And suddenly, your desperation feels real, as your blood’s popping outta your eyeballs and stuff.

As I said, you fall back on your own personal experience and what it would feel like to lose your mother at such a young age. And it would torment me, and this is before people had therapists, and you go along those trains of thought until it feels completely rotten and you’re miserable and you’re just playing and having … I don’t know, having fun sounds wrong, but it is as an act. I find I don’t hang onto it too much. I find the heaviest stuff that really interesting to delve into.

What are your thoughts on working with a visionary director like Terrence Malick on Way of the Wind?

It’s a complete honor. When my agent called me and said Terrence Malick would love to off your a part in his film, I nearly fell off my chair. Then I had a call with Terrence the next day, and I was like, “hi Terrence, it’s Douglas here.” And he was like, “oh, I loved you in that play back in something with Ian McKellen.” And I’m like, “I wasn’t in that play with Ian McKellen. Oh my God, is this a hoax? Is this a joke?” His next call after me was with Douglas Hodge, another actor. He’d got those two phone calls confused. And then we had a great chat and he’d seen me in a movie, which … I can’t give anything way about the movie he’s making now, but he’d seen me in a part, which he felt that meant I was right for this part in his film.

He’s just so warm and gracious and brilliant. I was shooting a movie in Montreal, and I’d get off set every couple of days and have a voicemail from Terrence Malick. It was a “pinch me” moment, but he has a very specific way of working. He is full of energy and he’s very passionate about this film and I can’t wait to see how he’s edited it and what he’s done.

You’ve played some musicians and historical figures. Are there that you’d really like to play in a biopic?

I’m sure there are lots. I remember one of my first auditions when I was a kid. I remember having to dance with the National Ballet in England. I’m not a very good dancer to play Rudolf Nureyev, and it was for a small BBC film. I would love to make a movie to tell that story, him and Margot Fonteyn. I think that would be very interesting and something I could physically … a role I could play. I love playing real people. I love being a bit of a comedian. I love trying to transform into them. I haven’t got anyone specific right now, apart from Nureyev maybe, but I need some ballet lessons. That’s something I’d like to keep doing in my career. I really enjoy playing these real life characters, something about it just feels like I’m transporting into another time and it’s hugely, hugely fulfilling, and a great honor to play these great iconic characters. So awesome. There’ll be more, yeah.

The Merc with a Mouth has officially entered the world of Midnight Suns. Firaxis Games is celebrating the occasion by…
Games 10 hours ago

Everyone loves Eddie Murphy. His foul-mouthed shenanigans have delighted audiences since he first stormed onto Saturday Night Live in a…
Movies 1 day ago