Once regarded as one of the most prominent names in Hollywood, Winona Ryder enjoyed a new surge in popularity thanks to Netflix’s Stranger Things. After Ryder endured some rough times at the beginning of the new millennium, her role as Joyce Byers allowed new generations of fans to discover the skills of the highly-touted actress. After watching 1986’s Lucas, Tim Burton was the first director who understood Ryder’s on-screen potential. The actress was 17 when she obtained her breakout role in the story by Michael McDowell and Larry Wilson. Lydia Deetz (Ryder) is a goth teenager who aspires to become a photographer. When she moves with her parents to New York, Lydia discovers that the house her family bought is infested with the ghosts of their former inhabitants. The project also involved Alec Baldwin, Geena Davis, Jeffrey Jones, Catherine O’Hara, and Michael Keaton. The ending opens the door to a sequel that has been teased for many years and might have come to a turning point as of 2022. Ryder and Keaton are expected to join the project and reprise their characters. Kim Boggs (Ryder) is stupefied when her parents announce that a humanoid with scissors blades for hands will live with them. Edward (Johnny Depp) madly falls in love with Kim, teaching the girl to look beyond appearances. While it never took over the box office, the movie became a cult, much appreciated by critics and fans alike. The real-life relationship between Ryder and Depp gave the most authentic charm to the gothic romance. Ryder and Burton joined forces for the second time before teaming up again in 2012’s Frankenweenie. When acclaimed director Martin Scorsese put gangster movies aside for a while to approach the historical romantic drama, the result was a graceful little gem. The film elegantly adapts Edith Wharton’s novel by the same name and features Ryder as May Welland, Daniel Day-Lewis as Newland Archer, and Michelle Pfeiffer as Ellen Olenska. The three main characters are involved in the most classic of love triangles, with unusual developments. Ryder’s cunning performance earned her an Academy Awards nomination for Best Supporting Actress. The film was also nominated for Best Adapted Screenplay, Best Art Direction, and Best Original Score but only won the one for Best Costume Design. 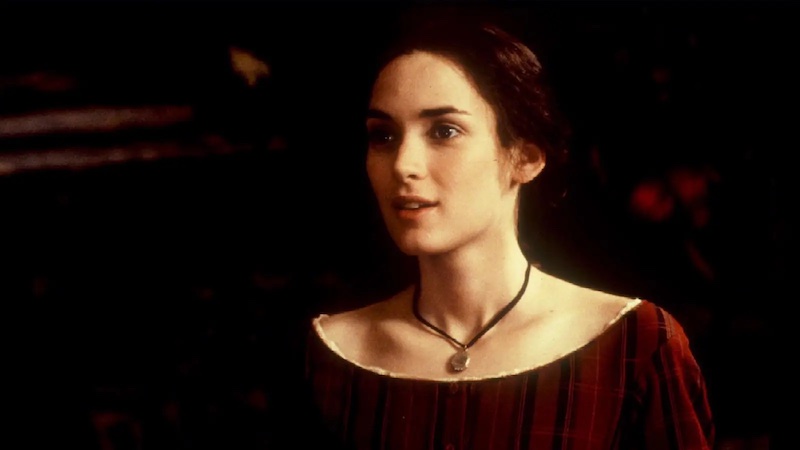 The classic story penned by Louisa May Alcott always fascinated Hollywood, and it probably always will. Gillian Armstrong directed the fifth adaptation of the two-volume novel with an ensemble that featured many up-and-coming actors of the Nineties, including Claire Danes, Christian Bale, Samantha Mathis, and Kirsten Dunst. Out of the four March sisters, the passionate Josephine (Ryder) follows her dream to become a successful author. Ryder’s interpretation of the ideal family member didn’t pass unnoticed, and the actress received a nomination for Best Actress by the Academy. Following a four-year hiatus and some unsuccessful roles in the 2000s, Ryder proved that she still has much to offer in Darren Aronofsky’s psychological thriller. Prima ballerina Beth MacIntyre (Ryder) is on the verge of a nervous breakdown after the much younger Nina Sayers (Natalie Portman) captured the attention of artistic director Thomas Leroy (Vincent Cassel). In addition to meeting the critics’ favor, the original story by Mark Heyman, Andres Heinz, and John McLaughlin was much appreciated by fans, resulting in a surprising box office success. The film piled up nominations for Best Picture, Best Director, Best Cinematography, and Best Film Editing from the Academy, but the lone Natalie Portman took home the award for Best Actress.

Which do you think are Winona Ryder’s most iconic roles in Hollywood? Let us know your list in the comments section below.

During the unveiling of the future of the DC Universe slate, co-CEO of DC Studios Peter Safran commented on the…
Movies 2 hours ago