This weekend, The Batman’s funeral scene clip, the first of likely many clips from Matt Reeves’ upcoming superhero flick, was unleashed, and it was great. Packed with atmosphere, subtle character bits, and an extremely somber (and eerie) tone, the two-minute clip left me pretty pumped for the movie.

There’s a lot to unpack with this one, so let’s get to all the things I loved about the first official clip from The Batman, which you can watch below if you missed it:

In a recent interview with Premiere France, Robert Pattinson had this to say about his take on the Caped Crusader:

I sincerely believe that the tone of The Batman has nothing to do (opposed to the previous movies), it feels new. In the comics, Batman is someone more… unstable. If you read between the lines, it’s actually very sad. Whereas in the cinema, it is always his heroic side that is put forward. The Batman does the opposite, we capture the inner bubbling of the character. In my opinion, the only other to achieve this is the animated film Batman: Mask Of The Phantasm. When I saw it, it clicked: being Batman is a kind of curse, it’s a burden. But hey man, you decided that, right? “No no no, I HAVE to be Batman. I was chosen, not the other way around.” I don’t think we’ve ever really seen that in a live film.

Judging from the clip, he’s not kidding. (Also, shout out to Pattinson for mentioning Mask of the Phantasm, one of the absolute best Batman films around.)

Throughout the extended funeral scene, Bruce doesn’t say a word. Rather, he seems completely transfixed at the sight of a young child seated next to what appears to be the casket of a parent — presumably his father, assuming that’s his mother beside him. Obviously, Bruce is experiencing flashbacks from his own tragic past, and working through a range of emotions.

Or maybe he’s preparing to recruit Dick Grayson as Robin! A guy can dream, right?

At any rate, this certainly isn’t the typical Bruce Wayne, billionaire playboy we’re accustomed to seeing on the big screen. Rather, this iteration of the character looks absolutely broken in a manner similar to the one we saw early in Batman Begins. Except, at this stage, Bruce is already Batman — a gig that clearly hasn’t moved the needle on his mental state all that much.

It’ll be interesting to see if Reeves allows Bruce Wayne to overcome his demons through Batman, or goes in the opposite direction and allows us to witness a broken man’s psychological self-destruction.

As an aside, I love the choir playing in the background. I know it’s a bunch of kids, but holy smokes does it lend an eerie tune to the proceedings. RELATED: The Batman and Little Caesars Partner for Riddle Challenge

There’s a great bit in which one of Gordon’s officers recognizes Bruce Wayne and gives him a shoutout, much to the chagrin of his superior officers who aren’t much impressed by the billionaire. In the section above, I stated that this version of Bruce doesn’t appear to be similar to his big-screen counterparts, but this moment certainly makes it clear that he is definitely famous enough to cause a tough city cop to briefly transform into a full-on fanboy — in the middle of a funeral, no less.

We don’t typically get a lot of Bruce Wayne fans in our Bat flicks. In Tim Burton’s Batman, no one — including a Gotham City reporter and a prize-winning photojournalist — seems to know (or care) who he is, even during a party at his mansion; the Joel Schumacher films posit Bruce in expensive galas, but no one makes much of his presence outside of a few reporters. Christopher Nolan’s Bruce raises a few eyebrows when he returns from the grave, but is mostly ignored throughout the rest of the series (aside from a brief bit in The Dark Knight Rises where his appearance shocks a couple of reporters), and Zack Snyder’s take on the character was more deadbeat drunk (one who had worn out his welcome) than prized celebrity.

So, it was cool to see a character, particularly a cop, show the guy some love. Especially since, I assume, at some point the cops will turn against Batman.

The Batman gives us our fourth big screen, live-action iteration of Commissioner Gordon and from everything I’ve seen thus far, Jeffrey Wright is perfectly cast in the role. The actor portrays the Dark Knight’s ally as a world-weary, soft-spoken, stern individual, and it will be interesting to see how his low-key personality meshes (or doesn’t mesh) with Batman. I love how quickly he takes control — or, at least, tries to take control — of the situation once that car comes roaring into the picture.

Though, it sure does take him a hot minute to identify Coulson.

We still haven’t seen much from Paul Dano’s Riddler, and by the look of the clip, it seems the famed villain will linger from a distance during the first act of the film like a friggin’ weirdo. At least until he allows himself to be taken captive, as seen in the trailer. It’s creepy as Hell how the man watches the chaos unfold from afar, standing in broad daylight surrounded by potential victims — but, man, what a shot!

Later, there’s another shot of the runaway car slamming into some pillars and you can clearly see The Riddler standing alone on the balcony, surveying the wreckage.

Of all the characters introduced thus far, Dano’s Riddler is the one I’m most excited to see.

The clip also shows off Riddler’s willingness to put innocent bystanders in harm’s way in order to ensure Batman receives his message. That’s some next level, Heath Ledger-Joker s— right there!

Another thing I absolutely loved about the clip was how composer Michael Giacchino cues his score to coincide with the rising panic. The music kicks in just as Bruce realizes what’s about to happen, a bit that felt very reminiscent of this scene in Christopher Nolan’s The Dark Knight, a good way.

If you haven’t already, check out the recently released track to The Batman soundtrack, which shows off Giacchino’s haunting theme in all of its glory.

Reeves does an excellent job establishing where everyone is situated in the scene via a number of carefully framed shots. After the car crashes, we get an over-the-shoulder shot from The Riddler’s perspective, followed immediately by a similar shot of Bruce looking up at The Riddler’s perch from the ground. From another angle, this one almost from the car’s perspective, we see Bruce rise, followed by a reverse shot of the young man staring at the vehicle, which allows us to see just how close he is to danger.

Then we get this amazing over-head perspective: 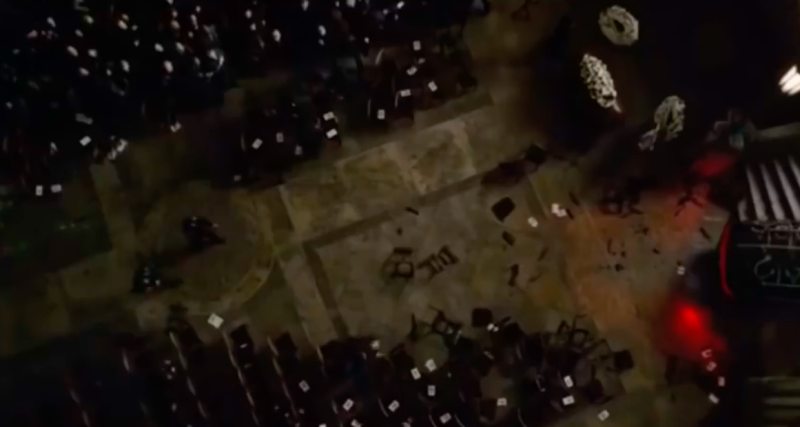 Seeing how Bruce rose from behind the flowers, we get a real good look at the location between him and the wrecked vehicle.

Oh, and the whole bird’s eye perspective of the actual car wreck reminded me of this shot in David Fincher’s Zodiac — coincidence?

As the scene continues, the cuts between shots are quicker, tightening the tension. Gordon and his men draw their weapons and surround the vehicle. Naturally, a man climbs out of the vehicle, his neck fixed with a bomb. So, not only are Bruce and, by extension, Gordon, standing very close to the wrecked vehicle, their heroic actions have put them in close proximity to a bomb.

Naturally, the clip ends before we see what befalls our protagonists, but considering the Riddler really wanted Batman to receive the note taped to the victim’s chest, it’s likely this scene doesn’t end with too many fireworks.

Finally, as Riddler’s victim draws closer to the police, a cell phone goes off causing the entire audience to duck for cover — well, everyone but Batman. My man stands his ground, clearly unafraid of bombs or cell phones. Or, the World’s Greatest Detective has quickly decided the threat is minimal seeing as the note strapped to the victim’s chest needs to be seen by Batman. Hence, his lack of reaction.

It’s likely that, had Coulson emerged from the car packing heat, Bruce would’ve ducked along with the rest of the folks. Or, at the very least, covertly tossed an all-purpose batarang capable of jamming weapons.

No one gets the jump on Batman. 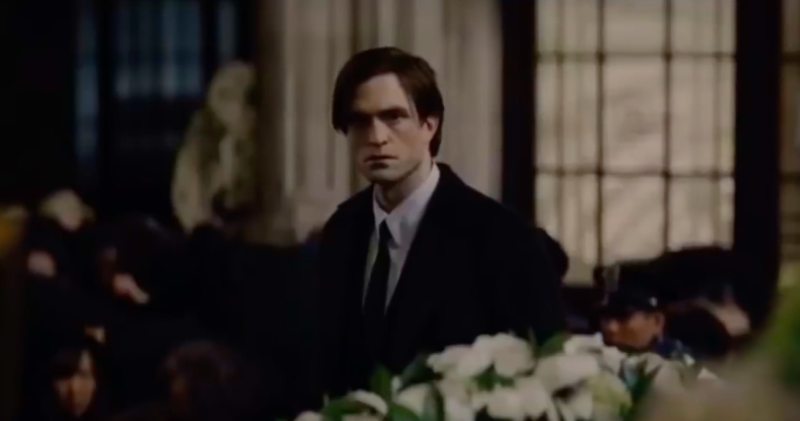 A sequel to Matt Reeves’ The Batman was announced last year, but little information involving the sequel has been released.…
Movies 2 weeks ago

The Batman Sequel Finds Its Writers