Saban Films will release the horror/supernatural thriller Warhunt in theaters, on digital and demand on January 21, 2022. The film stars Mickey Rourke, Jackson Rathbone

“1945. A US military cargo plane loses control and violently crashes behind enemy lines in the middle of the German black forest. Immediately ruthless Major Johnson (Mickey Rourke) sends a squad of his bravest soldiers on a rescue mission to retrieve the top secret material the plane was carrying. Led by Sergeant Brewer (Robert Knepper) and Walsh (Jackson Rathbone), the soldiers venture deep into the forest near the crash site,” says the official synopsis. “They soon discover hanged Nazi soldiers and other dead bodies bearing ancient, magical symbols. Suddenly their compasses fail, their perceptions twist and straying from the group leads to profound horror as they are attacked by a powerful, supernatural force. Fighting for the dainty and struggling to survive they must uncover the shocking truth behind the force before the Nazis and do everything they can to remove all evidence it ever existed, even at the cost of their own lives.”

ComingSoon Editor-in-Chief spoke with Warhunt star Jackson Rathbone about the film, its supernatural elements, and his love for the Twilight fanbase.

Tyler Treese: In Warhunt, your character is dealing with a lot going on. There are illusions, voices, all kinds of supernatural stuff. Can you discuss your approach to portraying this character that’s kind of unprepared for the situation and is dealing with so much?

Jackson Rathbone: I play Walsh, who is a special operative that is sent behind enemy lines during World War II to presumably fight the Nazis. However, there’s a certain supernatural element that rears its head that the squad is not quite prepared for. However, the more we see of Walsh, the more we realize that he maybe knows a bit more than he is letting on. So it was fun to play a character with a certain sense of mystique and maybe against type a little bit.

This is kind of a natural spin on war films because Nazis were doing so much crazy research into the occult and stuff like that. What did you find most interesting about that aspect for Warhunt?

That’s what I loved the most about Warhunt. The idea of kicking some Nazi ass. That was great. Then to imbue it with a supernatural element, which is true. Hitler was obsessed with the occult as were certain members of his inner circle, the higher-ups, and I think to kind of explore that within the realms of historical fiction was fun. I think it leads to a fun movie.

That’s certainly a rabbit hole you can go down. What kind of preparation did you do for this role?

I’ve been lucky enough in my life to have my closest friends be stunt performers at the highest caliber, and I’ve spent years training with them in hand-to-hand combat and stage combat. So I kind of have that in my back pocket at all times. So when it came time to do set fights and everything, I was able to work with the choreographers and gun performers and really try to craft something visceral with the limited resources we had making this film.

Then also, I’m from the south and I grew up with guns, so I know gun safety. It was drilled into me ever since I was a young boy scout and I remember day one, when they handed out the guns to the actors, we have a lot of European actors, who’ve never really seen a gun before, except for a prop on stage. They started playing around with them, like just silly kids to be honest. I had to kinda like whip out the dad voice like, “Nope, nope. We’re not doing that. Do not point the gun at your own head. Do not point the gun at the other actors.” Then I called together a safety meeting and I was like, “This is how will we will be holding our guns. We hold them, we point them up or we point them down. We never point them at each other unless we’re in the middle of a take and we understand that it’s safe and we’ve checked everything. I’m a bit of a stickler for set safety, especially when it comes to firearms. I grew up with that training. So that would be my background for Walsh.

That’s great, especially with recent events. Safety is so paramount, so that’s great you did that and everybody adhered to it after that.

Yeah. We had an amazing weapons handler and our team on that side. They made sure everything was safe. Like I said, it was just that first moment when the guns were handed out with that. There needs to be that come to Jesus moment where it’s like, listen here, this is what we’re doing, we’re making a story. We’re making believe, and we need to be safe about it, you know? Because safety is paramount and yeah, we have seen this in recent times where if you cut corners, awful tragedies can’t happen. I don’t wanna go too far into that, but that’s a shame.

You mentioned bringing out the dad voice and I saw you did this really EP with your son Monroe a few years back and I was listening to your album American Spirit Blues. How do you balance your musician aspirations with acting and are you working on any new music currently?

Yeah, I’m always working on music. It’s funny because my musician aspirations are nothing more than just I have to write music and I love to do it. Back in my band days with 100 Monkeys, we toured internationally and we’d tour about 200 days we would play shows out of the year and it’s a lot of work and I love it. I love it. But acting is my bread and butter. That’s my first passion and music is something that if I can release an album every couple of years, that’s all I really want. It’s to put music out there, and to be able to work with my kids and jam with them.

So the other day it was funny. My daughter, I have a full band set up in my basement, drums, keyboards, microphones, guitars, bass, and everything’s hooked up, ready to go at all times. My daughter is like, “Can we go jam?” She’s five years old, and so I set up the microphone for her. My nine-year-old’s like, “I wanna play the drums,” and so he gets on the drums and I’m playing guitar. My two-year-old’s running around dancing and we’re just jamming out. To me, nothing is [comparable], even like the biggest sold-out shows I did in Europe. I did a back-to-back London performance and we sold it out and it was such an incredible feeling, but nothing’s better than just looking someone you love in the eyes and jamming.

That’s very wholesome. The first role I ever saw you in was Justin in The O.C. That was one of your early TV roles. How exciting was it to be a part of such an established series at that point, and what are your memories of that role?

That’s so funny, man. Yeah, you’re taking me back. Honestly, I think at that point I was young and green enough to where I didn’t really understand that The O.C. Was such a big show or the cultural impact that it had. For me, it was just an audition that I booked and I was young and excited. I had fun with it, getting to come onto a set like that. But it was definitely one of those sets where it was kind of a learning experience.

I’ve done it a few times recently where I’ll come in for a season of a show and usually to play the bad guy. I did it on Finding Carter for MTV and The Last Ship with TNT. What’s fun about being a guest star, especially for a season, is you kind of get to go in there and they have everything established. Then you just get to shake things up a little bit, it’s like finding a snow globe on someone’s desk, and just giving it a quick shake and seeing what happens. 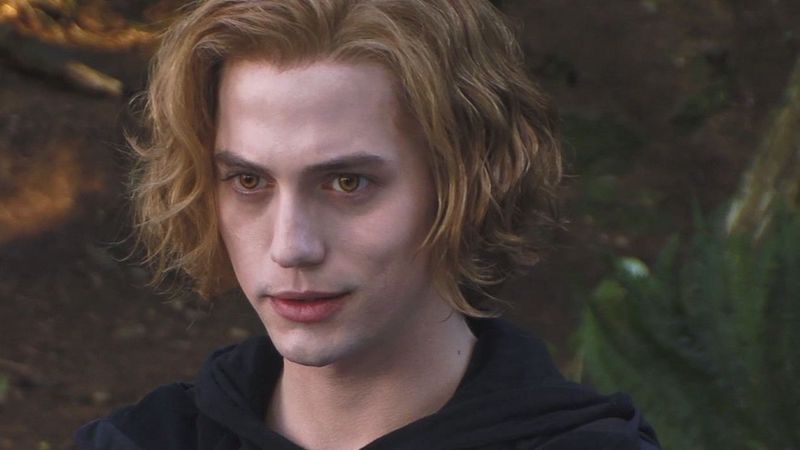 Twilight was your big breakthrough. When you first got that role, did you ever think that fans would still be having such a connection to where they’re still supporting you a decade after the series has ended, and how amazing is just that fanbase for you?

Oh, man, the fanbase for Twilight is something extraordinary. When I originally received the offer to play Jasper, I said, no because I was like, “The weird guy in the background who doesn’t do anything? Yeah. I don’t know about that,” and then Catherine Hardwicke called me into the production office and she literally basically read me Eclipse and I got to really see that there’s a character with depth, who has great regrets over his involvement with the Civil War, fighting for the Confederacy, and how he went on lamb for so long, and then was finally saved by love and essentially redeemed through the eyes of his paramour, played by Ashley Green.

For the fans to love the performance that I gave and the character, that’s, I don’t know, man, that’s unexpected. I could never have said to you in a million years that this was something that I’d be a part of, and it’s an honor to be a part of it. It really is because of the fanbase. They’re so kind, It’s crazy. I don’t like doing fan conventions, to be honest, but I’ve done a few recently and it’s blown away my perceptions of what a fanbase is and can be. Because the Twilight fans, they love each other to support each other and they’re so kind to us as actors

After listening to James Gunn’s plans for the DC Universe, I can only thank the superhero gods. This comic book…
Movies 4 days ago