HBO Max has released the Harry Potter 20th Anniversary: Return to Hogwarts special to celebrate the milestone of the blockbuster Harry Potter film series. Since its debut, it was clear that the adaptations of J.K. Rowling’s books were something special, quickly touching the hearts of thousands of fans across the globe. Over eight movies, the story followed the adventures of the titular character portrayed by Daniel Radcliffe. Sided by his best friends, Ron (Rupert Grint) and Hermione (Emma Watson), Harry stops Voldemort (Ralph Fiennes) from taking over the world. Overall, the film series’ quality is good even though it loses some of that initial magical feeling towards its conclusion.

To continue the 20th Anniversary celebration of the first film’s release, we ranked all of the Harry Potter movies, from the worst to the best. Let us know your own rankings in the comments below! 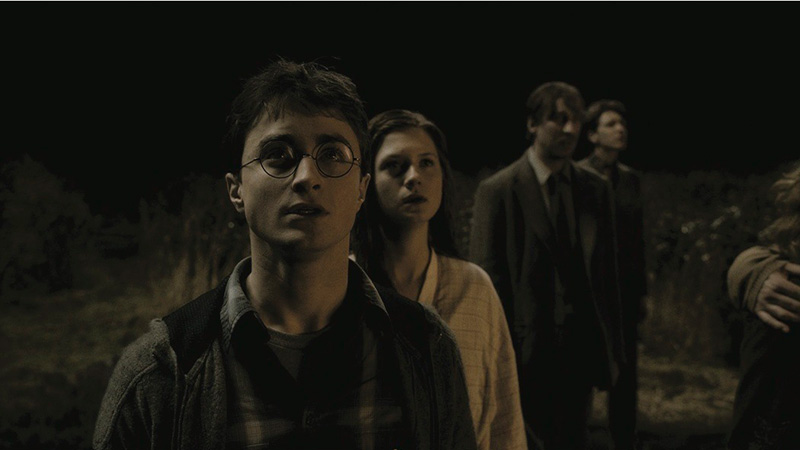 Voldemort’s failed attempt to kill Harry at the Ministry of Magic revealed the Dark Lord’s return to the magical community. In his sixth year at Hogwarts, Harry works closely with Albus Dumbledore (Michael Gambon) to unveil some dark secrets about Tom Riddle’s past. They discover Voldemort split his soul into seven pieces and hid those fragments in magical objects called Horcruxes. Before the end of the year, Harry and Dumbledore leave Hogwarts to retrieve a Horcrux in an effort to destroy it. In their absence, some Death Eaters storm into the school. Shortly after returning to the school grounds, Dumbledore confronts Voldemort’s followers, and Severus Snape (Alan Rickman) kills him.

The Half-Blood Prince is the second movie helmed by David Yates, and it’s the less entertaining of the four by the British director. The story feels too stretched, especially the attack at the Burrow that leads to nowhere. One of its most significant flaws is the desaturated color that makes this movie look like a never-ending flashback. Even the cast seems a bit tired at times. The final 20 minutes are entertaining, but they fail to save a mediocre film. 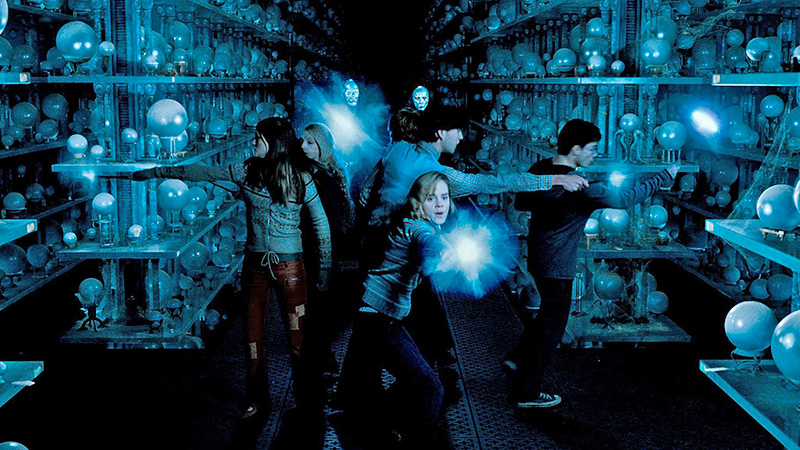 Harry announces the return of Voldemort to the wizarding world, but nobody believes him. A strange attack by a couple of Dementors forces Harry to use magic in front of Muggles, for which he goes inches away from being expelled from Hogwarts. When he returns to the school, he discovers that the Ministry of Magic imposed Dolores Umbridge (Imelda Staunton) as a teacher. Harry and his friends team up to work against the establishment and teach themselves self-defense chants. Voldemort takes advantage of his connection with Harry to lure him into the Department of Mysteries in London, where Harry and his friends face the Death Eaters led by Bellatrix Lestrange (Helena Bonham Carter).

After three directors alternated on the previous installments, Warner Bros. entrusted the final movies to Yates. Both the script and the directing are too intricate at times. Still, some great performances by the actors —Staunton and Bonham Carter in front of all — make this movie more enjoyable. For the first time, Dumbledore looks powerless against someone else’s initiative. However, he redeems himself by putting on a pretty epic duel with Voldemort. 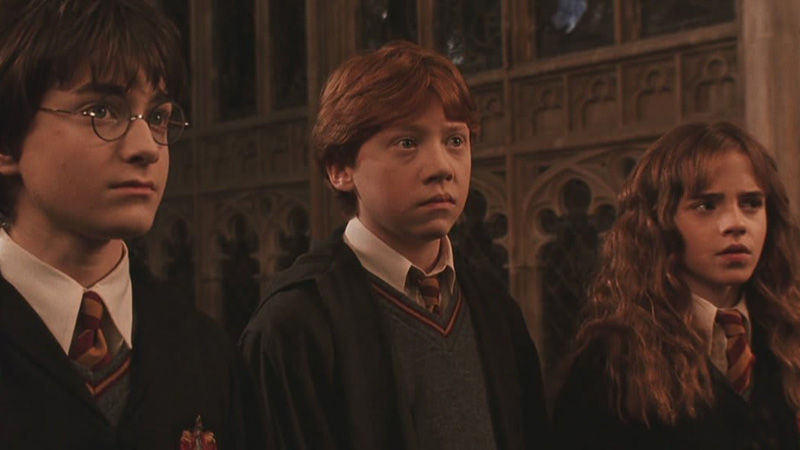 Strange things are happening during Harry’s second year at Hogwarts. First, someone attempts to prevent him from returning to the wizardry school. Then, many students are found petrified, including Hermione herself. Working to solve the mystery and save their friend, Harry and Ron find the Chamber of Secrets, where Harry faces the memory of the young Tom Riddle and Salazar Slytherin’s monster.

Director Chris Columbus’ second movie in the series couldn’t stand up to the first. The script expanded on the Malfoys and the Wesleys of the magical community. However, 161 minutes — the longest movie in the series — felt a bit too much at times. On the other hand, the lengthy story cast a different light on the wizarding world and its serious problem with racism towards people coming from non-magical families. 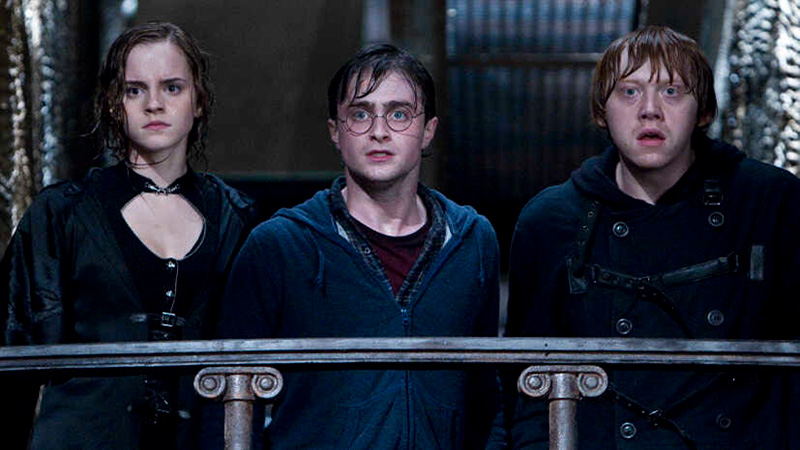 While technically they are two different movies, the Deathly Hallows duology has been shot simultaneously and shares the same key people. Harry, Ron, and Hermione leave Hogwarts to find and destroy Voldemort’s Horcruxes. They undergo plenty of perils, including a daring robbery at Gringotts Bank that involves a nasty dragon. Their mission leads them to pursue the mythological Deathly Hallows. The final part of their mission takes place at Hogwarts, where Voldemort hid most of the Horcruxes. Ultimately, Harry and Tom Riddle have their showdown.

The cast delivers memorable performances for the movie series’ finale, and even Yates’ directing looks better than usual. Snape’s plot twist and his famous line, “Always,” still stand as some of the best moments in the series. Composer Alexandre Desplat reinvents the static soundtrack and comes up with a few gems, including the touching “Lily’s Theme.” 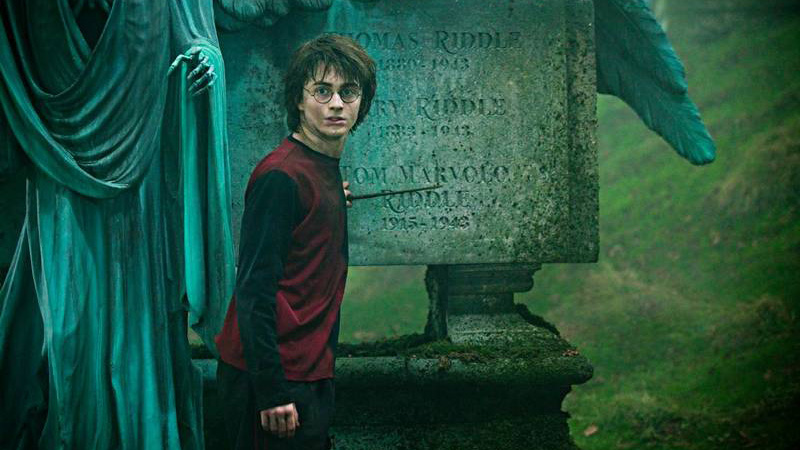 In his fourth year at Hogwarts, Harry participates in the Triwizard Tournament, which pits the champions of three magical schools in a series of tasks. During the competition, Harry faces a dragon and saves his friends from the Black Lake’s creatures. Shortly after finishing the third task, Harry is transported to a graveyard where he witnesses Voldemort’s return.

With director Mike Newell, the scale of the wizarding world grows significantly. The story introduces new students from different wizardry schools, monsters, charms, and intriguing characters like “Mad-Eye” Moody (Brendan Gleeson). The return of Voldemort is impressive as Fiennes takes the villain’s viciousness to the limits. Also, death feels closer than ever for the first time following the murder of Cedric Diggory (Robert Pattinson) in cold blood. 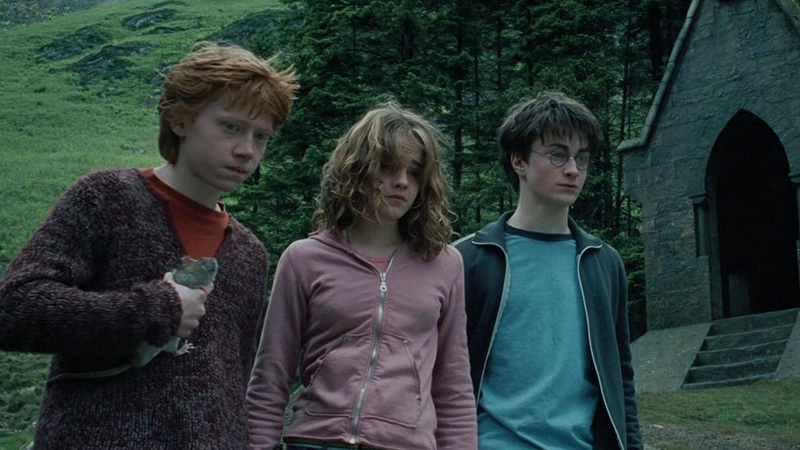 The wizarding world is on alert after the notorious killer Sirius Black (Gary Oldman) evades Azkaban, the wizarding prison. During his third year at Hogwarts, Harry finds out that Black was a close friend of Harry’s parents before selling them to Voldemort. After meeting Black in person, he learns the truth about the real culprit, Peter Pettigrew (Timothy Spall).

After taking over from Columbus, director Alfonso Cuarón made a clean break with the past. Directing-wise, this movie is the most sophisticated and well-executed one in the series. However, most fans don’t appreciate Cuarón’s choice to change the Harry Potter imagery as almost everything feels different (and this movie ultimately performed the worst at the box office). At the same time, the rest of the saga relied more on Cuarón’s legacy than on Columbus’ work. 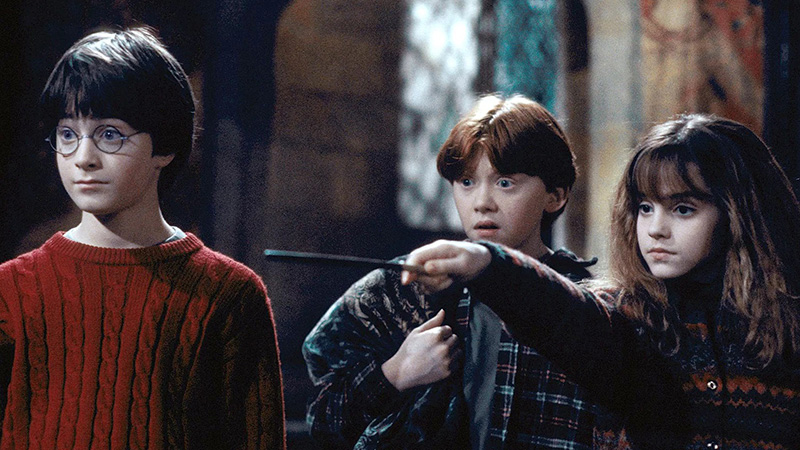 Harry is an orphan who lives a miserable life with his uncle and aunt. At the age of 11, he discovers that he is a wizard and that his parents died while protecting him from Voldemort, the evilest wizard ever. On the same night that Voldemort killed his parents, Harry involuntarily destroyed Voldemort’s body thanks to the protection that his mother’s sacrifice offered him, but You-Know-Who’s spirit endured. After joining the wizarding school Hogwarts to develop his skills, Harry discovers a dark plot to steal the Sorcerer’s Stone and allow Voldemort to get back his body.

Director Columbus’ vision was a great introduction to the wizarding world. The sets, the makeup, and the practical effects still stand 20 years later. The young Radcliffe, Watson, and Grint perfectly fit the roles of Harry, Hermione, and Ron, and they shared a good synergy. The warm atmosphere created by Columbus feels like a fable inviting the watchers to join the magical world hidden from the Muggles’ eyes. The movie is an instant classic, helped by an iconic opening theme. It grossed more than $1 billion at the box office.

Speaking to Marvel ahead of Titan Books’ release of the Spider-Man No Way Home: The Official Movie Special Book, Andrew Garfield reflected on…
Movies 1 hour ago

According to a recent report from The Cosmic Circus, actress Jona Xiao is set to join the Marvel Cinematic Universe…
TV 23 hours ago

On this day 20 years ago, Harry Potter and the Chamber of Secrets hit theaters in the United States. After the incredible…
Movies 3 months ago

What will WB do with the declining Potter brand?
Movies 10 months ago