Just in time for the film’s theatrical and digital debut, ComingSoon.net got the opportunity to chat with horror genre vet Larry Fessenden (The Dead Don’t Die) to discuss his role in the Barbara Crampton-led chiller Jakob’s Wife, which is out now!

ComingSoon.net: So Jakob’s Wife is an absolute blast of a movie. I got to check it out before South by Southwest and then at SXSW, and I just love it so much, but what about it really like drew you to the project?

Larry Fessenden: Well, I have a relationship with Barbara, we’ve done radio plays together and two movies, though I didn’t see her on the first, on You’re Next, but she’s just fantastic, and I guess we’re a little bit older than the kids out there, so there’s sort of a camaraderie of being middle-aged. I liked the script a great deal, and then I had also known Travis for some years, so it was a great combination of personalities behind the camera, and it was a great role for me to do something a little different, as a man of the cloth.

CS: I was gonna say, that was one thing I talked about a little bit with Barbara as well was that it was a very different role than what we’re used to seeing you in where you’re more rambunctious of sorts, but in this one, you’re a little more timid. You’re a man of the cloth! What was it like exploring this different personality for you?

LF: Well, I like that, you know, I am interested in philosophy and some sort of thoughtful things of how do you get along in life and how are you a good leader, so there’s some sort of aspects of the character that I related to, maybe not religion, but the idea of having responsibility in a community. Then I just think it’s funny to play an uptight, older white guy [laughs] who’s sort of oppressive to his wife, so I was able to access all of my grumpy attitude. It was fun.

CS: Would you say that you had any sort of creative challenges than going into the role?

LF: No, the way I approach acting is you try to find some empathy with the character and understand where he’s coming from, and then you just bring that to each scene. Then, of course, the director makes adjustments, and you have the other actor to play off, which was a great privilege to work with Barbara. She’s so lively, always just really jams with anything. So that combination is really a winning one.

CS: It was interesting to hear Barbara talk about how long she had been trying to get this project off the ground, so I’m curious for you what was it like working with her where she’s acting in both the producer and actor’s chair? 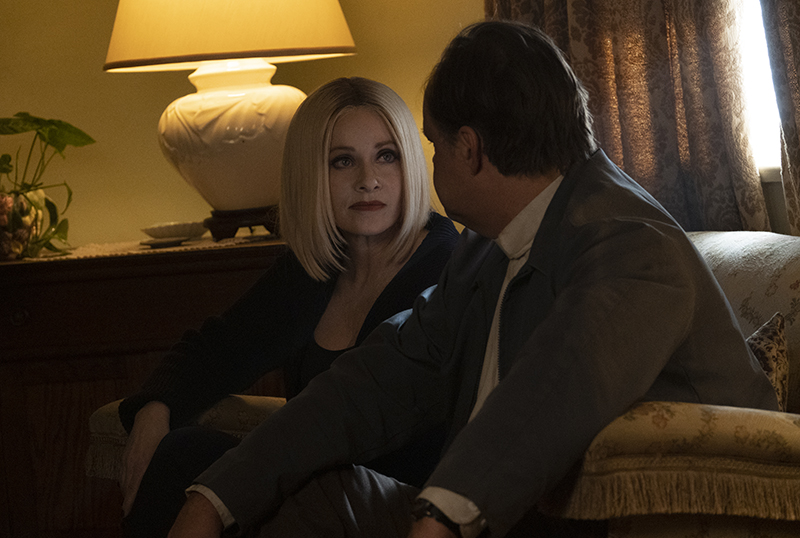 LF: At this level of filmmaking, you’re all working together to make the movie. It was very natural to hear her concerns as a producer, she had ideas about casting, you know, Travis had written the scripts after the other writers he had done a pass, so it was fun to watch her dealing with her fellow producer Bob Portal, Travis and then me as an actor, but also as a filmmaker. It all seemed very natural to me. I often wear many hats, and it was great to see her really flexing her muscles as a producer, and she enjoys filmmaking and the genre.

CS: Since you mentioned that you’d worn different hats as well, what was it like for you working with Travis to sort of help further flesh out your character, given that you know you’ve worked as well as both a writer and director in the past?

LF: He had a nice idea, he asked us to fill out some sort of questionnaire for our characters, and it’s one of those things where I don’t think he was trying to learn what our answers were, but gave us the opportunity to sort of think about how our characters would answer the questions. Like one of them was “Who was my favorite president?” as my character, and that was sort of cool. It was fun to just come up with an answer. It forced you to give a backstory and all kinds of other things about our relationship, what was her first boyfriend, and what was my first girlfriend and all these kind of things. So I thought that was really inventive of Travis. There were other times on set when I might sometimes suggest a way to do something, but he had a strong vision. It’s all collaboration, and, you know, the actors are in the service of the director, so I only gave advice if he seemed overwrought.

CS: You and Barbara have worked plenty of times before, but what was it like building the chemistry for your character-specific relationship before bringing it in front of the camera?

LF: Well, the cool thing is that we filmed in Mississippi, but we all went down there, and we never went home, that’s where we lived for the month. Barbara and I lived in a house together, so we sort of lived the married life. Someone would make the coffee in the morning, etc., and we hung out both before and after shooting. So that was nice. I think we both knew that not only were we enjoying each other as actors and as fellow artists, but we also were sort of logging in the time together, which gives you a more naturalistic character. We just like talking. We talked about our own marriages. It was cool. It’s very not always what happens to a lot of movies. You walk on set, and you just start working, and it’s very disorienting.

CS: I can only imagine, especially if it’s like, ‘Hey, we got to go be a married couple in five minutes.’

LF: I mean, that would be a badly-directed movie. [laughs]

CS: You’ve had plenty of movies that you’ve been a part of that have gotten into South by, but what was it like hearing that this had gotten into it and then seeing this outpour of love from the horror community upon its premiere?

LF: Well, the outpour of love was so wonderful, and it was so great to see Barbara, who did work long and hard on this movie, just getting props. It really felt like it was a culmination of her hopes and dreams for the piece because it’d been through a lot of iterations. It’s always satisfying to see that, and for myself, I was very happy to be part of it, and I enjoyed that people chuckled at my whole look in the movie, all cleaned up. You don’t realize how people think of you until you change up, and then everybody’s in shock, so that was fun. For me, it was pretty torturous because I looked like I’m 20 pounds heavier just because of those. But that’s the joy of acting. You throw away any kind of vanity and really become the character to whatever degree one is in the method. That’s the job. It’s a fun, fun job.

CS: This isn’t the first time in a horror movie either where you’ve had to get bloody, but what was it like filming some of the more gory or practical effects-heavy sequences in the film.

LF: I’m always very at home with all that ever since I was a kid, you know, I’d put bullet wounds all over myself. And real blood too. I’ve always been prone to helping myself and living on the edge [chuckles]. So it was all fun, it was cold, so some of the geysers of blood got a little icky, but it’s all part of the gig. I enjoy it. In horror, you’re shocking people in one way or another, and that’s sort of been my M.O. [laughs], make people feel uncomfortable, that’s my jam. 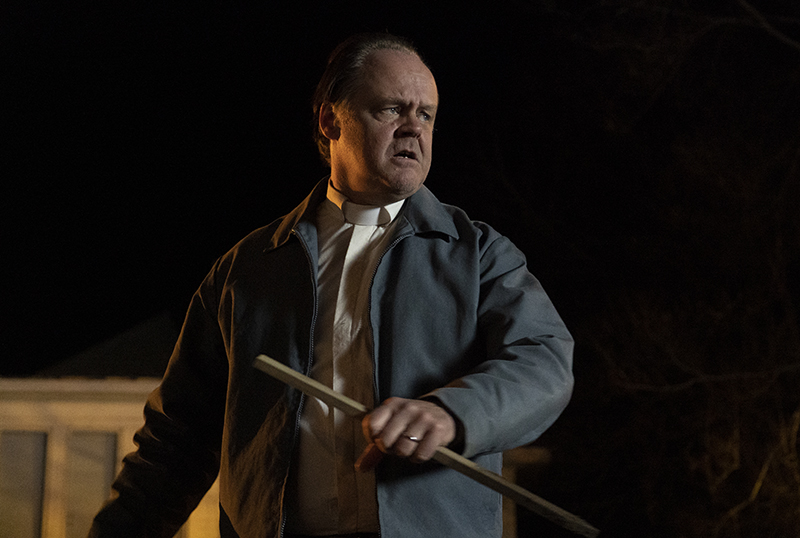 CS: So what was it then like for you getting to see Bonnie in the full Master wardrobe and makeup?

LF: Well, Bonnie is so cool. She’s such a big character anyway as a person. She’d show up and do a couple days and then disappear, but I think design is fantastic. It obviously references Nosferatu and Salem’s Lot, those sort of categories of vampire films, and I just think that’s such a favorite of mine, and hers is so awesome. It was great fun with that kind of iconic-looking character. It’s like welcoming back an old friend, that particular conceit, that design, that sort of rat-like face.

CS: To look away from Jakob’s Wife, it’s been a while since we really have seen you step behind the director’s chair, Depraved was the last thing I can think of off the top of my head, so I’m curious when are we going to see you get back in the get back in that saddle?

LF: I’m hoping this fall, you know, got to find the money, that’s really the only inch every time. But I got a script, I’m very excited, I’m starting to gear up, and nowadays I try to spend as little time on the money as possible. That sacrifices to make a movie cheaply, but I’m fine with that, so I hope I can find a couple of shekels early this fall. That would be pretty dreamy.

CS: Is it going to be another horror outing from you, or are you traveling outside the genre a little bit this time?

LF: Certainly not! It’s a full-blown horror! More accessible than maybe my other films, though I mean, my movies are always a little elevated, preoccupied with different things. I’m not gonna give it away, but at the core is a very familiar, beloved monster, so I’m excited to get into it.

Directed by Travis Stevens (Girl on the Third Floor) and co-written with Mark Steensland (The Special) and Kathy Charles (Castle Freak), the film centers on Anne, who is married to a small-town minister and feels like her life and marriage have been shrinking over the past 30 years. After a chance encounter with “The Master,” she discovers a new sense of power and an appetite to live bigger and bolder than before. As Anne is increasingly torn between her enticing new existence and her life before, the body count grows, and Jakob realizes he will have to fight for the wife he took for granted.

The horror-thriller is an AMP production produced by Bob Portal (It Came From The Desert), Inderpal Singh (The Hoarder), Crampton and Stevens. RLJE Films is a business unit of AMC Networks, while Shudder is the studio’s premium streaming service for horror, thriller and supernatural titles.

Jakob’s Wife made its debut at SXSW last month to rave reviews and is now in select theaters and on digital platforms!