So often overlooked in the psychological horror genre is the masterful Tim Robbins-starring Jacob’s Ladder. Just in time for the 1990 film’s 30th anniversary, ComingSoon.net got the opportunity to reflect with director Adrian Lyne on the legacy of his hellish cult classic.

Penned by Oscar winner Bruce Joel Rubin (Ghost), the film centers on Vietnam War veteran Jacob Singer (Robbins) who begins to experience bizarre hallucinations and fragmented visions following his return to New York. As the hauntings intensify and he begins to question whether he can trust those around him in his life, he desperately races to find the truth.

Alongside Robbins, the cast for the film featured Elizabeth Peña (The Incredibles), Danny Aiello (Do The Right Thing), Matt Craven (Sharp Objects), Pruitt Taylor Vince (Bird Box), Jason Alexander (Seinfeld), Eriq La Salle (Logan) and Ving Rhames (Mission: Impossible — Fallout). The film was only a modest success upon release, grossing $26.1 million on its $25 million budget and receiving generally positive reviews from critics, but has garnered a cult following in the years since and even spawned a thoroughly-panned remake last year.

Lyne looks at the film’s cult status in awe, excited by the fact that people have gone back to give it multiple viewings and garner a different opinion on the project in the 30 years since its release and likening audience’s reactions to his when diving in to an Ambrose Bierce short story.

“There was a book called Incident at Owl Creek, which was Ambrose Bierce, and there was a good short film that was based on it, and I was always fascinated by that idea of not watching what you think you’re watching,” Lyne recalled. “I think funny enough Jacob’s Ladder was a movie that sort of needed to be seen twice, because I think if you just saw it the first time, you spent a lot of time trying to work out what you’ve seen. But the idea of what you’re doing is watching a man’s dying process, really, while he remembers his wife and kid and while he imagines a life with Jezzie that he’s never had. So it’s his memory and imagination and essentially the whole film is just in his mind. So that was fun to do, and that’s what happened in The Incident at Owl Creek. You think he’s got away and you understand that what you’ve seen was literally while he’s dropping while he’s being hanged.”

Despite the initially muted response from critics, it would go on to inspire widespread areas of pop culture even soon after its release, with the acclaimed first three installments of the Silent Hill video game franchise taking heavy influence from the film. In looking at this influence and quick turnaround on opinion, Lyne “hopes” that the film was ahead of its time and that the marketing might have worked against it.

“As I say, I think you probably needed to see the movie twice to sort of understand it,” Lyne said. “You probably would’ve enjoyed it better the second time. And that may have been the problem, you know? But it’s great that people are still talking about it. And I was kind of proud that there were no special effects in it. All of it was done in the camera, and nothing was done afterwards. There was no digital stuff at all.” 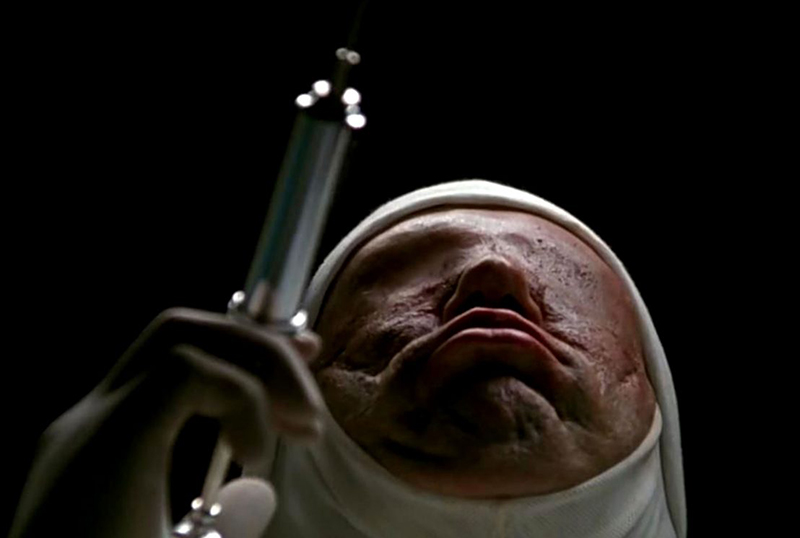 One of the biggest conversations Lyne recalls having with Rubin during the development of the film was how to portray the “voids” in the script, in which the titular veteran is thrown into the terrifying and nightmarish hallucinatory realms.

“Literally we talked about the movie for a year and he had always seen it in sort of biblical terms,” Lyne recalled. “He’d always seen it in terms of heaven and hell as recognizable images, and I was much more interested in making… rather than hell being like pitchforks and people with clothed heels and heaven being sort of a magnificent staircase and pillars and clouds, like Liberace, I always just say I don’t want to do the Liberace version. So I thought it was more interesting that home upstairs in your house is heaven, going upstairs. I also liked the idea of the horror side of it, the demonic side of it being flesh-based. So almost thalidomide, so that it wasn’t easily recognized, so that you couldn’t dismiss it. Francis Bacon, I loved his pictures. They were just interesting because they’re blurred and grotesque, but you can’t quite see what’s going on. You have to fill it in with your imagination, and I think that’s much more interesting and frightening than seeing images that you’ve seen before.”

Today marks the 30th anniversary for the legendary Quentin Tarantino film Reservoir Dogs, and in a recent interview with ComingSoon,…
Movies 4 months ago

Eli Moskowitz has finally found some balance in his life, as seen in Cobra Kai Season 5. A couple of weeks ago,…
TV 5 months ago

The film hits theaters this week!
Movies 10 months ago

Adrian Lyne, the director of films such as Jacob’s Ladder and Fatal Attraction, returns with his first directorial effort in…
Movies 11 months ago