Cobra Kai 2: Dojos Rising is the latest video game adaptation of the Netflix hit. While the first Cobra Kai game, 2020’s The Karate Kid Saga Continues, was a straightforward brawler, the sequel is a bit more ambitious with its larger levels and expanded exploration. It’s a good direction in theory, and occasionally in execution, but its lack of polish demonstrates how it was crippled by its ambition.

It begins by having players choose what dojo to represent: Miyagi-Do, Cobra Kai, or Eagle Fang. The available characters and hub will differ depending on that choice, although all three campaigns are largely the same after the first stage as the quest to recruit dojo members and eventually take part in the All Valley Tournament doesn’t change. Some of the levels feature more creative fights and recruitment methods (such as winning an obstacle course race or convincing potential recruits through dialogue), but people mostly join through repetitive and overly lengthy brawls that feature waves of enemies. These battles can go on for so long that they wind up sucking the charm out from seeing the ridiculous karate moves that feature some dramatic animations and elemental effects. Character upgrades unlock over time and are important on higher difficulties, but they aren’t all that satisfying of a hook given its monotonous core. 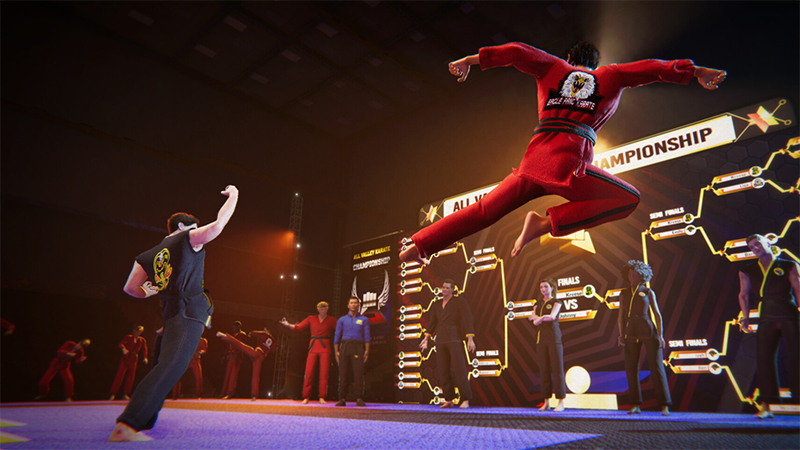 The actual tournament is much better and easily the best part of Dojos Rising. These one-on-one bouts have a scoring system that allows the combat here to have more depth than the fights found in the other areas of the game. Characters have unique attacks and physical attributes, so changing styles is key to coming out on top. A speedy combatant is likely better at pushing their opponent off the edge of the mat, while a more powerful striker can pick up two points by getting three knockdowns. This variance of gameplay seen in these point-driven competitions makes them more rewarding. Unlike beating on 20 forgettable-looking NPCs in the more open stages, squeaking out a come-from-behind win provides an actual thrill due to the strategy that comes with figuring out how to best score points.

The confined setting for the tournament fights also limits how many bugs might pop up. Enemies and the protagonist alike can often glitch outside of the playable area or the final wave may just never trigger, forcing players to eat the bullet and quit out. This is all on top of generally sloppy combat and performance that routinely chugs even on a PlayStation 5, which is extra embarrassing for a dated title that isn’t visually impressive by any means. 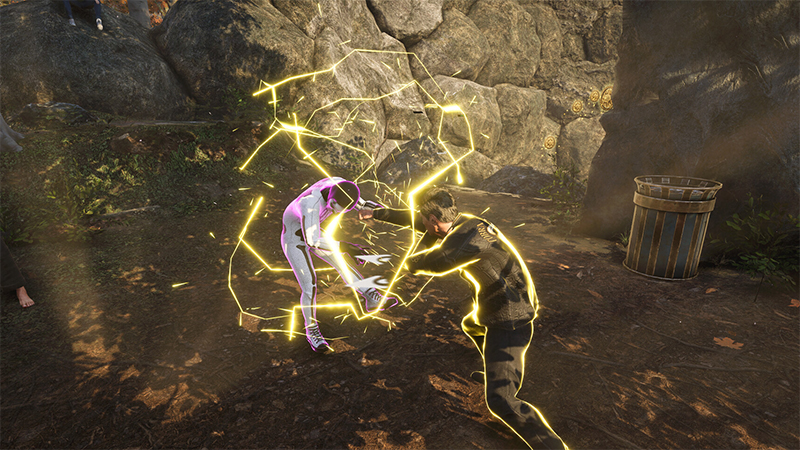 Cobra Classics mode continues the trend of good ideas with subpar execution as it recreates the iconic high school brawl from Season 2 and the garage fight scene from Season 3. However, instead of getting into awesome duels with rad choreography, players are often outmatched and have to brute force them by figuring out what combos will exploit A.I.’s limited intelligence. Constantly evading and finding the right cheap attacks is incredibly tedious and a more cinematic approach would’ve helped make these two sequences highlights rather than Dojos Rising‘s most disappointing feature.

Dojos Rising is sometimes able to replicate the charm of Cobra Kai, but these moments are fleeting and far apart. A few smiles and laughs aren’t worth trudging through a middling brawler that is weighed down by a bevy of technical problems. While there might not be any bad students, there are definitely bad games, and Cobra Kai 2: Dojos Rising is a clear-cut example of that. There is potential, but it’ll take more than some Mr. Miyagi quotes to get a sequel that lives up to the charms and isn’t as bad as The Karate Kid Part III.

As ComingSoon’s review policy explains, a score of 3.5 equates to “Bad.” Due to significant issues, this media feels like a chore to take in.

How to Watch Cobra Kai Season 5 on Netflix

Serving as a sequel to the original The Karate Kid films, Cobra Kai on Netflix is a martial arts comedy-drama…
TV 4 weeks ago

Eli Moskowitz has finally found some balance in his life, as seen in Cobra Kai Season 5. A couple of weeks ago,…
TV 4 months ago

Terry Silver is terrorizing the valley in Cobra Kai Season 5. More than 30 years after making his actorial debut in The Karate…
TV 5 months ago