There is a reason why brick-breaking games are one of gaming’s longest-lasting genres. It’s simply fun to move a paddle around and watch blocks break while trying to keep a ball in play. While Breakout set the mold the genre would follow back in 1976, it was a decade later when Arkanoid that showed its true potential through colorful levels and power-ups that significantly changed the gameplay. The genre largely adhered to the “if it’s not broke don’t fix it” mantra for the next 25 years as it wasn’t until 2009’s Shatter that the genre received another facelift. While the genre hasn’t been all that relevant as of late, even as smaller digital releases have become more prevalent, the weirdly named Shatter Remastered Deluxe makes busting bricks a total blast once again on a new set of platforms (including Netflix’s mobile gaming service).

What made Shatter so great over a decade ago, and why it has held up so well, is that it gives players a form of control over the ball after it bounces off the paddle. This is done by using the triggers to either blow air out or suck it in, thus changing the ball’s trajectory. It impacts more than the ball since loose blocks can be pulled toward the paddle, forcing players to avoid or put up a shield. Shards can also be collected that power up said shield along with a special attack that sends a barrage of bullets toward any hard-to-reach bricks. While these are small tweaks, they wind up drastically impacting the gameplay as traditionally players had no control over the ball after it would hit the paddle, thus adding a ton of strategy to every moment and making the entire experience more active. Since you’re not just waiting around for the ball to return, it’s more engaging. 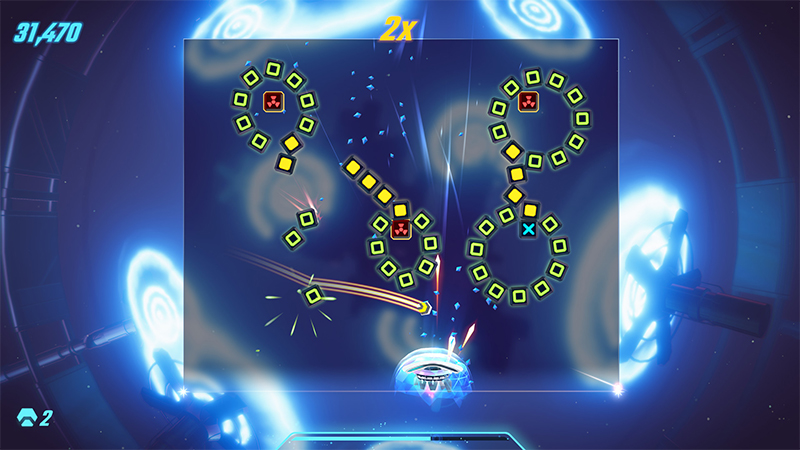 There are 71 levels to work your way through in the game’s 10-world story mode and there are three stage types. There’s the classic Breakout level where your paddle is at the bottom and you’re shooting your balls up into the air at bricks, but there’s also a more intriguing horizontal layout that is more reminiscent of a side-scrolling shooter as you move your paddle vertically.

However, the biggest change is the addition of spherical levels that have the paddle rotating on an axis as the rounded stage creates unique bounces that aren’t seen anywhere else. The stages evolve over time to feature different types of blocks, such as some that are missile-style projectiles and gravity-pulling ones that alter the trajectory of the ball. All of these changes give Shatter a great feeling of familiarity mixed with innovation and it still largely feels fresh in 2022 thanks to how few and far between brick-breaking games are nowadays.

The boss fights truly showcase developer PikPok’s creativity and are a delight to take on. From using pinpoint accurate shots to damage a weak point to using the suck and blow mechanic to make a seemingly-invincible boss vulnerable, players will have to make the best out of their skill set to take down these enemies. They are the perfect way to cap off a world and some of the later ones get satisfyingly tricky as they feel like proper accomplishments in a genre that can often feel like busywork if stages aren’t properly constructed. These are also some of the most visually impressive moments, as the vibrant 4K art is more impressive when showing off the detailed creatures than the simplistic bricks found in other levels.

Shatter Remastered Deluxe is a total blast and a reminder of the arcade-style fun that made gaming so popular in the first place. It has a nostalgic central mechanic that’s simple and satisfying and even more engaging when considering all the more modern touches that add more depth. With an endless mode, the ability to play cooperatively with a friend, and the satisfying high-score chase, it also has much more staying power than the genre also typically offers. This is brick-breaking at its finest.

As ComingSoon’s review policy explains, a score of 9 equates to “Excellent.” Entertainment that reaches this level is at the top of its type. The gold standard that every creator aims to reach.

Disclosure: The publisher provided a PlayStation 5 copy for our Shatter Remastered Deluxe review. Reviewed on version 1.000.000.

The much-anticipated Black Panther sequel is the crown jewel of the Disney+ schedule for February 2023. The streaming service (sign-up…
Movies 4 mins ago