SNK vs. Capcom: Card Fighters’ Clash is the latest NeoGeo Pocket Color title to make its way to Nintendo Switch. Inspired by the classic fighting games that saw the SNK and Capcom rosters duke it out, the game replaces fast-paced action with card battles, which is perfect for a handheld title. Whether you were a Fatal Fury fan or want to have Ryu and Mega Man on your team, the game features 300 cards that are filled with iconic gaming characters and more than a few obscure ones that will send you down a fun Wikipedia rabbit hole. While an old game that was on a niche system, SNK vs. Capcom: Card Fighters’ Clash still has enough strategy and charm to withstand the sands of time.

The card game itself is rather interesting as only three character cards can be active at the same time. While that might seem limiting, there are a number of options, such as action cards that supplement other cards but cost SP to do so and fighters having unique abilities that can be used. On top of this, each fighter can be backed up by three specific other cards, which adds an intriguing layer to deck building as you want to have a varied roster but one that can play well together.

Another key thing to consider while playing is that you gain SP by summoning characters onto the battlefield. This becomes a fascinating balancing act as the more powerful cards won’t give you any SP, so you have to balance saving up energy for your assist cards while still putting out decent enough fighters so you don’t get wiped. While it isn’t Yu-Gi-Oh in terms of depth, this 1999 title holds up rather nicely and still has plenty of nuance for players to master. 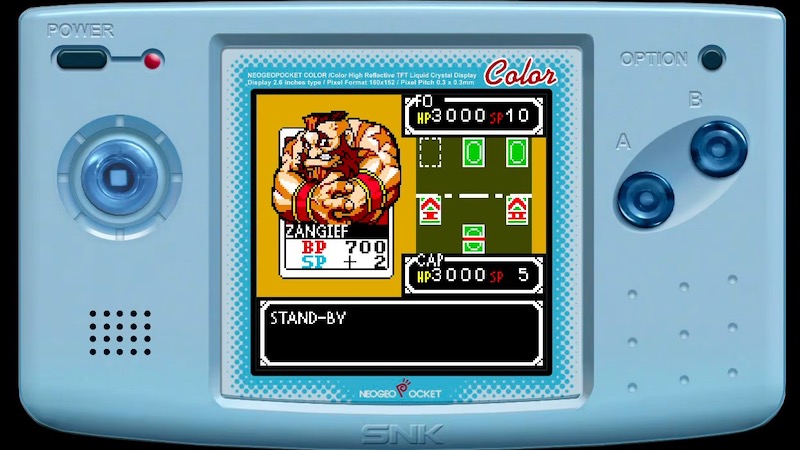 As with other titles in the NeoGeo Pocket Color Selection line, players are given a nice range of options that help it feel like a deluxe package. The original, fully colored manual can be flipped through within the game, there are multiple skins to choose from (plus the ability to zoom in if you aren’t worried about getting a pixel-perfect representation), and the controls are fully customizable. You can even use touch controls to control it via the on-screen NeoGeo Pocket Color; a very silly but also pretty novel inclusion. The biggest upgrade is the ability to rewind, which is perfect if you’ve made a mistake that might cost you a close match. Although with a title that can move as slow as a card game, its limited rewind window can be bothersome as you might not notice that you’ve goofed up until it’s too late.

The original release went the Pokémon route of having two separate releases to encourage trading between players in order to get all the cards. Thankfully, this version includes both, plus you can even play the Japanese version or the English one. The English and Japanese versions don’t communicate together, but you can easily trade between SNK and Capcom versions and even fight against one another. Giving players this many options really makes this the ultimate way to play SNK vs. Capcom: Card Fighters’ Clash, which is all you can really ask for in such a port.

The Nintendo Switch port of SNK vs. Capcom: Card Fighters’ Clash is lovingly crafted and the core game holds up surprisingly well. Whether you’ve got nostalgia for the original title or just the characters on the SNK and Capcom rosters, there is a lot to like here if you’re a fan of card collecting games. The battles can be quite thrilling and it’s great that this solid NeoGeo Pocket Color game can live on decades after release.

As ComingSoon’s review policy explains, a score of 7 equates to “Good.” It’s a successful piece of entertainment that is worth checking out, but it may not appeal to everyone.

Few publishers have had as good of a run as Capcom over the last generation. With a commitment to its…
Games 4 months ago

Fighting games are a decent portion of SNK and Capcom’s individual libraries, but the two companies used to make crossover…
Games 5 months ago