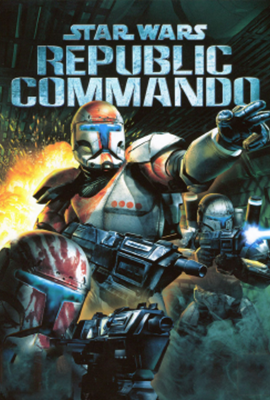 Over 15 years ago, LucasArts continued its expansion of the larger Star Wars universe with the Xbox and PC game title Republic Commando, an experiment of testing the tactical shooter formula in the sci-fi series and the initial result was great. Sure, its controls were a bit finicky at times and the sound design faltered under the franchise’s rules, but its overall presentation proved to be a fun ride for Star Wars fans, garnering a cult following in the years since and the titular group even being worked into the larger canon, which made the prospect of a port for the Nintendo Switch all the more enticing. Sadly, though, this port could’ve used a bit more time in the oven as it tends to fall apart as the game goes on.

Players step into the shoes of Delta-38 aka Boss, the leader of an elite squad of Republic Commandos comprised of demolitions expert Scorch, hacker and technical expert Fixer and sniper Sev, as they are thrust into the chaos erupting throughout the galaxy on missions to infiltrate, dominate and annihilate the enemy in the Clone Wars. Traveling between Geonosis, Kashyyk and the derelict spacecraft Prosecutor, the Delta Squad must battle a variety of enemies and follow Boss’ orders to achieve victory.

Upon booting up the game on both the handheld iteration of the console and dock connected to my television, I initially found myself quite impressed by the up-resed visuals, with the opening planet of Geonosis, the rest of my Delta Squad and the enemies all looking quite impressive still and the green blood splatters on the screen from the insectoid warriors of the planet being killed up close by my melee weapon and rapid fire rifle. The stages explored in both Kashyyk and the Prosecutor are still quite exciting to behold, although the rain element from the former and the larger groups of enemies in the latter makes for some horrific instances of frame drops.

While the environments of the planet remained pretty much the same across the entire level, it’s forgivable given its desert planet setting, but there was one thing introduced in the level that would carry over and mark a larger problem for the game: repetitive waves of enemies.

Though the enemies certainly vary from stage to stage and some prove to be exciting to battle against as a fan of the franchise, namely the droidekas, the problem is the level progression essentially boiled down to being in one place and facing wave after wave after wave of similar or increasingly-tougher enemies and it’s a rather dull formula. To make matters worse, given the game’s short runtime, players will frequently come upon truly ridiculous difficulty spikes inserted in a (frustrating) effort to pad the hours put into the game. The fact that some enemies players can encounter back-to-back in a level will take two or more clips from the base DC-17 pulse rifle before going down and extra ammo being sparse for the rifle in certain zones will leave some wondering what the intended plan of attack were in the encounters or why Apsyr didn’t elect to nerf the health and defense numbers for certain enemies.

One element of gameplay that should’ve come in handy for these more difficult scenarios — keep in mind, I was only on medium difficulty — is the ability to command your squad mates to conduct certain tasks, but unfortunately this system appears to be broken in this port. Where players are supposed to hold down a button to bring up the list of commands for the team, holding down the button certainly shows them, but the D-Pad directions set to each directive doesn’t work, leaving players to hope their cohorts are following behind and shooting down any enemies (which they do surprisingly well). Aside from this broken command system and a still finicky aim sensitivity, the controls overall do at least hold up, with the custom mapping option making it much easier for players to adjust to their more modern control schemes and making it relatively easy to move and shoot through the levels.

While it features some of the franchise’s iconic tracks and its own unique score, good weapon effects and great voice work, the sound design could’ve used a little refining. A number of lines of dialogue tend to run over each other, but even more distracting is the fact that the members of the titular group are voiced by different actors, despite the fact they’re all clones of Jango Fett and original actor Temuera Morrison even voices a handful of characters in the game, including player character Boss. With the other expanded medias of the Star Wars franchise, especially The Clone Wars, keeping the voice work consistent as one of two people for the clones and Morrison back in the fold with Disney+’s The Mandalorian and The Book of Boba Fett, it seems a bit surprising and disappointing they didn’t just bring him in to record the necessary lines, especially given the varied voice work was a complaint upon the game’s original release for breaking lore rules.

Whether stemming from my own nostalgia for the title or desire for a return to the classic LucasArts games days, Star Wars: Republic Commando certainly isn’t quite the awe-inspiring title I remember and while its excessive difficulty spikes and mildly finicky controls might not win any newcomers, it’s sure to at least entertain fans desiring to bring this title with them on the go.

World War Z: Aftermath released in September 2021 on a variety of systems, and now Saber Interactive has revealed when…
Games 3 weeks ago

Lucasfilm has unveiled a brand new teaser promo for the forthcoming Disney+ premiere of Star Wars: The Bad Batch Season…
TV 4 weeks ago