Sega has unveiled the 2023 content road map for the most recent Sonic the Hedgehog game, Sonic Frontiers.

RELATED: Sonic Frontiers Is a Promising Reinvention That Begs for a Sequel

The forthcoming free content is divided into three primary updates. The first update contains a Juke Box, Photo Mode, and new Challenge Modes. The second update will celebrate Sonic’s birthday in some way and will include the Open Zone Challenge and new Koco. The final update seems to be the biggest, as it comes with new playable characters and story content. The graphic implies that Tails, Knuckles, and Amy may be the playable characters, though, beyond the presence of the new character Sage, little is revealed about the upcoming narrative.

Before all this content starts to come out, however, players can download a free Holiday Cheer Suit for Sonic, which seems to be based on the Christmas art from the original Sonic Adventure. The suit will become available on December 21, and like the rest of the DLC, will be completely free.

You can take a look at the official road map graphic below: 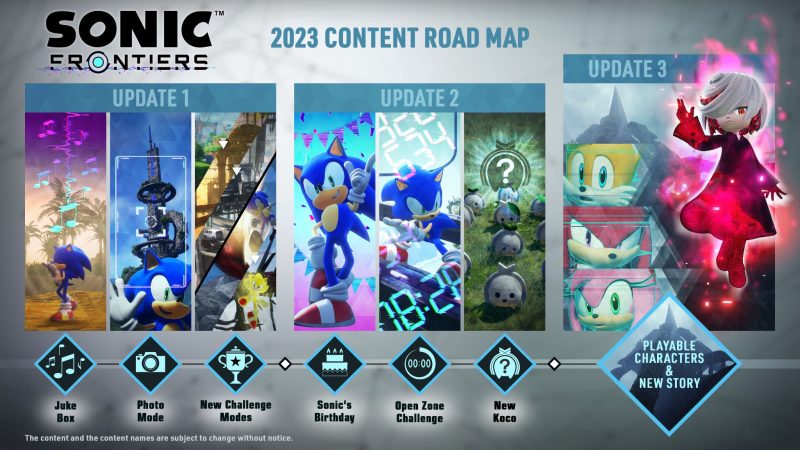 Sonic Frontiers was released on November 8 and followed Sonic and his friends as they explored the mysterious Starfall Islands. The game was moderately well-received for its new ideas, so fans will likely be excited to hear that so much free DLC is on the way.

Insomniac Games is still working on Spider-Man 2, but that’s only the first of two announced Marvel games it is…
Games 8 hours ago

Dying Light 2 is nearly at its first anniversary, and Techland is celebrating by revealing what 2023 has in store…
Games 2 days ago

The Merc with a Mouth has officially entered the world of Midnight Suns. Firaxis Games is celebrating the occasion by…
Games 1 week ago

Marvel’s Avengers Support Ending Soon, All Cosmetics Will Be Free

Update: Crystal Dynamics put out a post confirming most of the report. The game will be getting its final 2.8…
Games 2 weeks ago